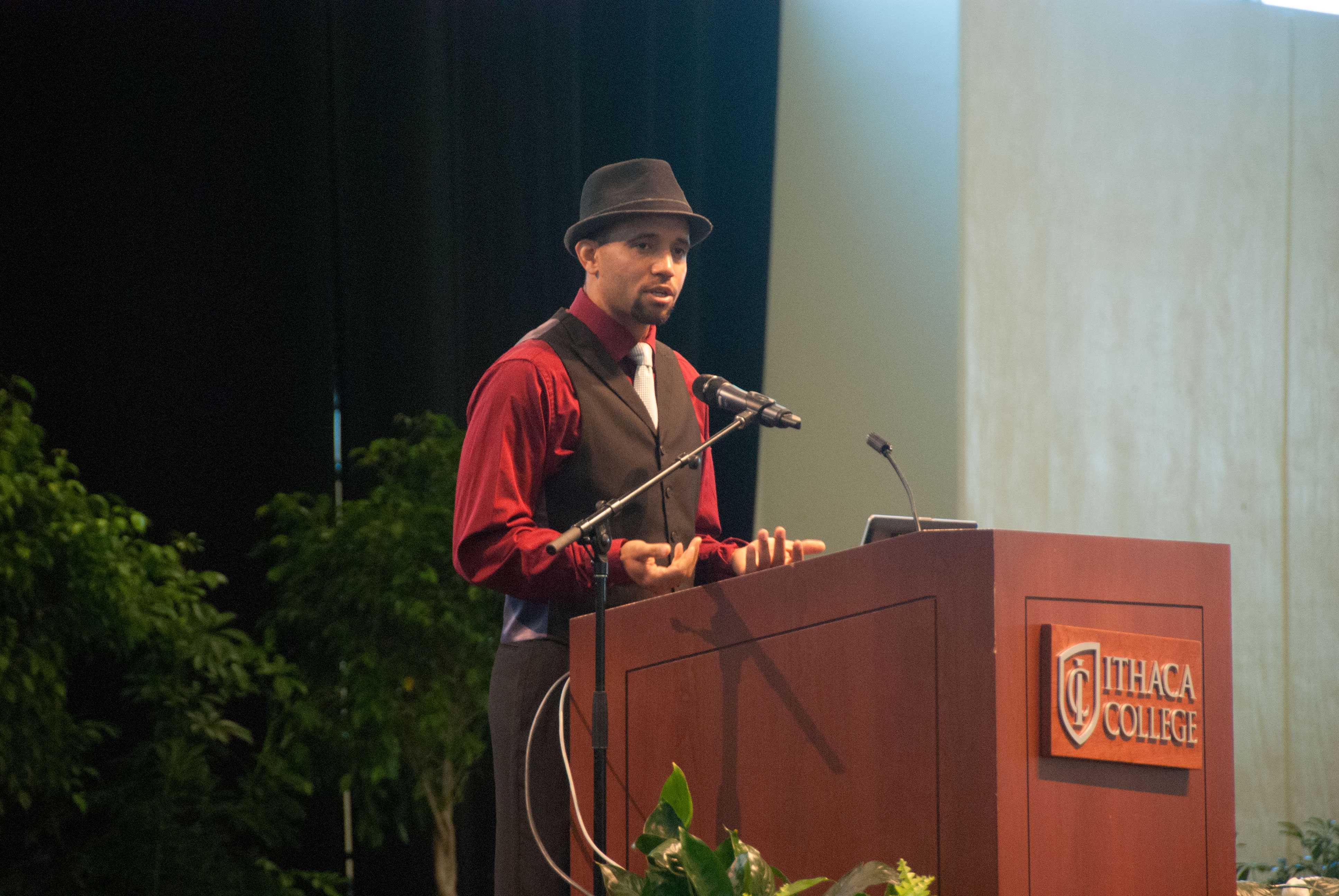 The Class of 2018 gathered Aug. 26 in the Athletics and Events Center to discuss James McBride’s novel “The Good Lord Bird” as a part of Ithaca College’s final year of the First-Year Reading Initiative program.

Through the FYRI program, freshmen read a book that is specifically assigned by Ithaca College, attend a faculty-led presentation and discuss the novel in small groups.

Shaianne Osterreich, associate professor of economics and Ithaca seminar coordinator in charge of the FYRI, said about 550 students out of 1,550 incoming freshmen — only 35 percent — attended the event this year.

“I was a little surprised at the low number because of the positive conversation on social media over the summer,” she said.

David Cameron, recruitment marketing web content producer, managed a social media campaign through which members of the freshman class shared their thoughts on the novel and built connections before arriving to campus.

“I was very happy at how many students posted about how much they enjoyed the book and were encouraging to others who had trouble getting started,” Cameron said. “This was the first year I’d seen any students go that far to share about the book.”

The featured novel is about a teenage slave who narrates his encounter with historical figures, such as Harriet Tubman and Frederick Douglass, on his journey with abolitionist John Brown. Osterreich said “The Good Lord Bird” was selected because it offered the college an excellent opportunity to engage in meaningful conversation about identity and history.

Part of the annual event involves listening to a faculty speaker discuss the core themes the novel presents. Derek Adams, this year’s speaker and assistant professor of English, said he thinks he was chosen to speak because of his background in teaching African-American literature.

“I think they just try to find somebody who can bring the book to light and then make connections between the book and what’s going on in the life of students’ transition to college,” Adams said.

For this year’s discussion, he said McBride’s novel challenged students to engage with the text at a college level.

“Last year’s text was ‘Brooklyn’ by Colm Toibin and the students’ response, although some of them thought very favorably, some of them also felt that the connection between the transition to college was just too obvious,” Adams said.

His presentation focused on how college is the opportunity for students to figure out their individual identities.

“Everybody comes here to Ithaca College to have an opportunity to reinvent themselves in a new way,” Adams said. “There’s something really powerful about simply allowing people to find their voice and get a sense of who they are on their own.”

Osterreich said student affairs and academic affairs will replace the FYRI program with a new program in the First-Year Residence Experience.

Last year, the Faculty Council began revising the FYRI program and working to implement the ICC Kick-Off events, which will consist of six theme-based events during the course of Fall Welcome next year, she said.

The FYRI was extended for one more year because at the time it was discussed, she said, there would not have been enough time to do thorough planning to have kick-off events this fall.

“It may not seem like it, but it basically takes a year’s worth of planning to put together events that are that big, so we just did not want to start doing it in January,” she said.

She said resident assistants, faculty and Residential Life staff will form planning groups this year to plan the kick-off events for next fall, which will be oriented around small groups and may include a range of activities from speakers to discussions.

The reason for the switch is that the FYRI was not aligned with the broader vision of IC 20/20, which includes the ICC, she said.

“One book is just not going to appeal to everybody,” Osterreich said. “One of the reasons behind the ICC having six different themes is that people gravitate to these different thematic areas … the idea was that we could build on that and have there be exciting, academic and co-curricular activities that are really integrated into the vision of the next 10 years of the campus and the ICC.”