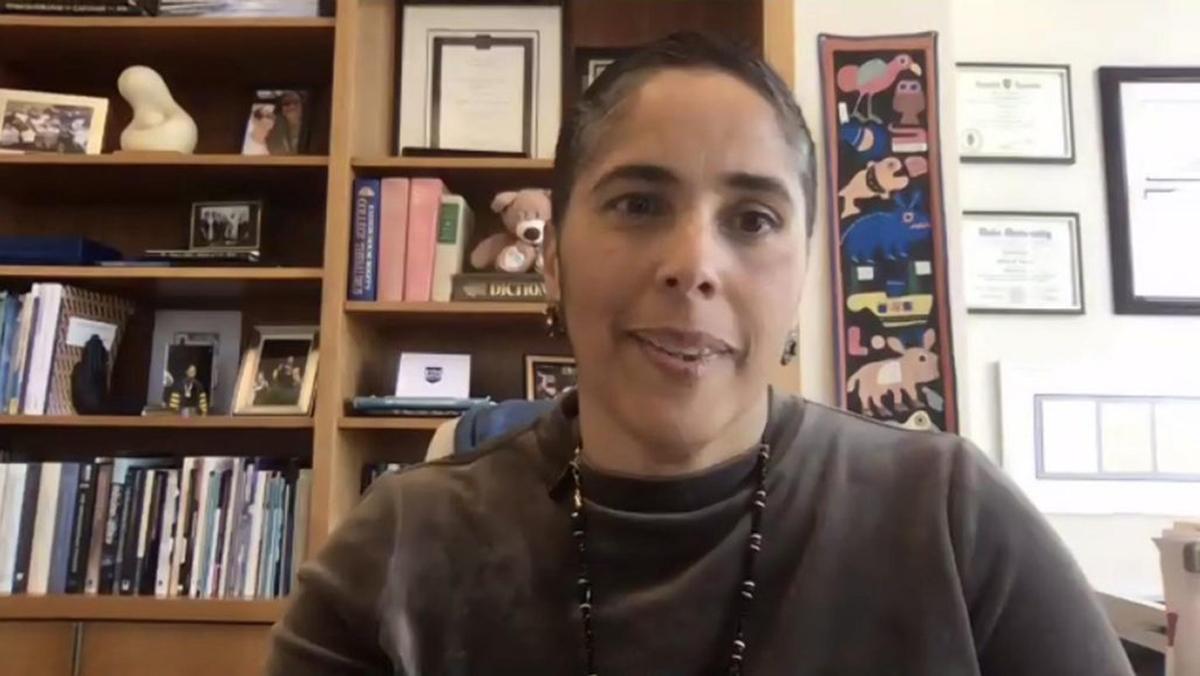 Ithaca College President Shirley M. Collado spoke about decreases in enrollment and collegewide cuts for Fall 2020 at the All-College Gathering on Sept. 22.

Collado said the college has four major priorities for the 2020–21 academic year: students; its financial health; diversity, equity and inclusion; and health and safety. She said that these priorities are intertwined with the strategic plan, Ithaca Forever, specifically the goals around student success and being an employer of choice. The college has been facing financial struggles over the last few years. However, after holding classes remotely for part of Spring 2020 and all of Fall 2020, the college is experiencing increased financial issues, resulting in staff furloughs.

Collado said that the COVID-19 pandemic has sped up the timeline for the strategic plan’s implementation.

“This will be a year of great change and anxiety, but great promise, to really decide what programs, departments and positions that no longer really align with the need that the college has and identifying areas of potential strength and growth while still being very true to our commitment to liberal arts and professional education,” Collado said.

As of July, at least 51,973 employees at colleges nationally have been furloughed, laid off or not had their contracts renewed, according to The Chronicle of Higher Education. As of the end of April, at least 167 Ithaca College employees — primarily those in the Office of Facilities and Dining Services — have been laid off.

Hayley Harris, vice president for human resources and planning, said that a majority of the reductions will be a result of prioritization of nonacademic programs — namely staff members.

“Unfortunately, yes, we have had and will continue to have additional furloughs,” Harris said. “This is among the most difficult work that we have to do. We value every single employee here at Ithaca College, and, as we make these difficult decisions, our focus will be on supporting employees who are impacted and ensure that work can continue.”

La Jerne Cornish, provost and senior vice president for academic affairs, said that faculty reductions will be guided by the principles created by the Academic Program Prioritization Committee, a strategic plan action group that evaluates the college’s academic programs.

“We will also have a website to update the community regularly about our work so that everybody can see what we’re doing, how we’re doing it and why we’re doing it,” she said.

Collado said that an area of growth for the college is the physician assistant program, which will be located in the Rothschild Building on The Commons. She said that the entertainment and media management master of business administration, which was launched in Fall 2019, has also been successful.

Collado said that an important goal in the strategic plan is changing the size of the college.

“We’re not a little liberal arts college,” she said. “We’re not a big hefty university. We are an incredibly distinct institution because of our size. We’re really focusing on how recalibrating our size, which will mean getting leaner and more focused and, yes, smaller, and then growing in particular areas that are very strategic for us.”

In a Sept. 21 email to the college community, Collado said that she was going to discuss the college’s financial health but provided minimal details at the All-College Gathering.

Previously, concerns have been raised about the sustainability of the college’s budget model. At the last All-College Gathering on Jan. 28, Collado said that the college needs to change its budget model so it is not as reliant on tuition.

Sources at an all-faculty-and-staff gathering Aug. 18 said Bill Guerrero, vice president for finance and administration, said that with the fall semester being held remotely, the college is experiencing an $8 million deficit. If Spring 2021 is online as well, the college will face between a $30 million and $50 million deficit.

The college releases its specific enrollment numbers in the annual Facts in Brief report, which comes out in early October.

Laurie Koehler, vice president for marketing and enrollment strategy, announced June 18 — before the college announced its transition to remote learning — that 1,155 students had put down deposits. In the announcement, she said that she expected enrollment to decrease to less than 1,100 students after melt, the term used to describe when students pay their deposits but do not actually enroll.

Colleges in states in the Northeast and Midwest have been experiencing decreasing enrollment numbers for the past few years.

“We knew that demand was going to drop and was dropping, particularly for regional colleges in certain parts of the country, specifically the Northeast and Midwest,” Koehler said in a June 26 interview.

The college has previously struggled with low enrollment and had to make budget cuts for the 2019–20 academic year because of lower–than–projected enrollment.

Neither Guerrero nor Koehler spoke at the All-College Gathering on Sept. 22.

Collado said that the 2020–21 academic calendar has not changed and that the college intends to hold in-person classes in the spring. The spring semester will begin with a phased move-in and dual instruction from Jan. 25 to Feb. 8. She said that there will be more details about Spring 2021 coming soon.

Collado said that the college is implementing the Return to Campus Plan on a smaller scale with the students, staff and faculty who are on campus.

“We’re fully engaged in planning and executing returning to campus for the spring semester,” she said.

Christina Moylan, director of public health emergency preparedness, spoke about three areas the college is focusing on for both the fall and the spring — testing, quarantine and isolation and behavioral and health and safety protocols.

The college has administered 5,466 tests as of Sept. 24, according to the college’s COVID-19 dashboard. There have been seven positive cases, and there are currently two active cases. Testing takes place at the Athletics and Events Center. Testing is offered from 8 a.m. to 4 p.m. Sept. 29 and 30. Those who are symptomatic are not allowed on campus and must go to the sampling site at The Shops at Ithaca Mall.

The tests the college currently uses are nasopharyngeal tests, which are inserted into the nostril and can be uncomfortable. The college is looking at other methods of testing for the spring, she said.

“The history so far in Ithaca of positive cases are not associated with students in classrooms,” she said. “They are associated with behaviors that are occurring off campus, particularly around travel and with social gatherings where these behavioral recommendations aren’t in place.”

Dean of Students Bonnie Prunty discussed the virtual opportunities to engage with other students that the college is offering. She said that the Division of Student Affairs and Campus Life is holding events for students.

These programs include a slow read of “How to Be an Antiracist” by Ibram X. Kendi. There is also a space for white-identifying students to discuss what it means to be white and explore white students’ role in anti–racist work. The college held similar anti-racist spaces for white-identifying students from July to August this summer. The college also held discussion spaces for Black students and students of color to discuss their experiences with racism over the summer.

“We had a space just for students of color because students of color reached out and asked for it, and then, as a result of that space, we had Black students reach out and say, ‘That’s great, but we need a space just for us,’” said RahK Lash, director of the Center for Inclusion, Diversity, Equity and Social Change, in a July 27 interview. “This wasn’t something as an institution that we just said we’re going to do. Our students asked for this, so we responded directly to that request.”

In response to a question about if the all-white discussion spaces are effective in combating racism, Prunty said that the discussions are meant to help white students feel comfortable talking about their whiteness and prepare them to have discussions about race in larger and more diverse groups.

“It’s a series of programs every Friday, and the focus are things like an overview of 400 years of slavery in the United States, information about white privilege, those kinds of topics,” she said. “The hope is that that ultimately gives students the ability to shift their frame of reference from, ‘Oh, I am absolutely not racist as a white person’ to a place where they’re able to think differently about how they can engage in work against racism and live it day and day out as a part of their life.”

Prunty said that this is part of a process and that these discussions alone cannot stop racism. Cornish said the college will provide spaces for students of color to have discussions as well.

Elizabeth Bleicher, professor in the Department of English, said that the Remote Engagement Strategy Team, a group that develops strategies to engage students and help them learn in a remote environment, is creating a remote semester web hub that will provide students with academic and health and wellness resources and engagement opportunities with other students. She said that this will be available in the coming weeks.

Junior Michael Memis attended the meeting and said he appreciates that the administration took the time to hold a gathering to discuss the upcoming year.

“I think it was nice they had it and are communicating what they’re doing, especially as someone who’s taking a leave of absence,” he said. “A lot of it felt carefully worded because the school seems to be in a precarious position.”

He said that he is concerned with the college’s financial health and the college-wide cuts that will be occurring.

“I know that being in-person is crucial in the school for the spring,” Memis said. “I’m nervous about what their plan is with many of the programs and departments during their plan where they may get smaller.”