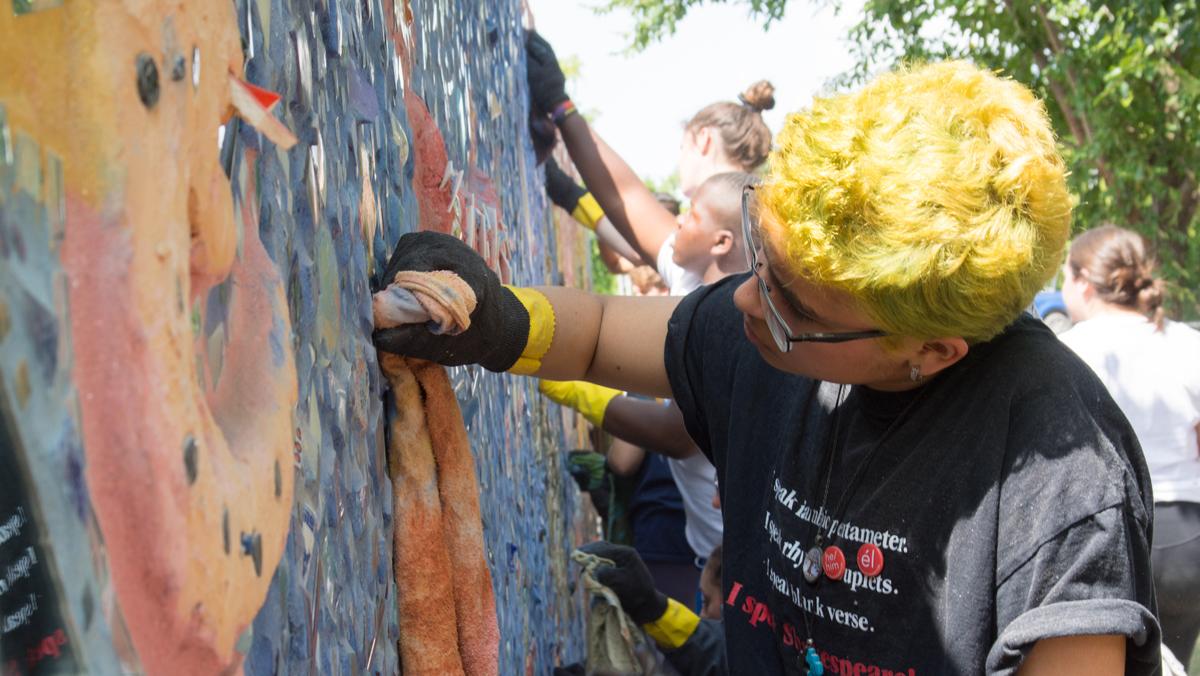 TED ZERIVITZ/ THE ITHACAN
Ithaca College freshman Luis Valderrama dabs at a mosaic being created by the First Street Mosaic Project team Aug. 26. The group, composed of students participating in the Jumpstart program and community members, is crafting a mosaic mural on a wall of the downtown water and sewer Department of Public Works building.
By The Ithacan
Published: August 30, 2017

College to give honorary degree to distinguished race activist

Distinguished author, activist and educator Beverly Tatum will be awarded an honorary Doctor of Letters degree by Ithaca College at the college’s annual Engaging Communities luncheon, scheduled for Sept. 14.

Tatum, who is best known for her book “Why Are All the Black Kids Sitting Together in the Cafeteria? And Other Conversations About Race,” is a national advocate for students of color. Her books address how to have difficult conversations about race and how the role of race affects learning outcomes of students in the classroom.

“We are honored to recognize Beverly Tatum for her contributions to our understanding of racial identities, to conversations about race and to higher education,” President Shirley M. Collado said in a statement published by IC News. “Drawing connections between students’ personal identity development and more general patterns of racial identity formation, she has provided us with tools for meaningful discussion across racial and ethnic lines. I look forward to hearing her campus presentation and the stimulating dialogues it is sure to engender.”

IC Wind Ensemble performance to be held in downtown Ithaca

The IC Wind Ensemble will be performing a concert composed of “old-fashioned” band music in downtown Ithaca at DeWitt Park. The 2017 Founder’s Day Concert in the Park, organized by Friends of Ithaca College, is being held at 2 p.m. Sept. 24. The concert was organized to pay tribute to Patrick Conway, a prominent musician with Ithaca roots who became one of the most famous bandleaders of the early 20th century.

The IC Wind Ensemble will perform works by Vaughan Williams, Gustav Holst, Dmitri Shostakovich, Antonio Vivaldi, Jean Sibelius and Conway himself. Refreshments will be provided and concertgoers are recommended to bring blankets or chairs. There is no admission fee to attend. For more information about the concert, and requests for accommodations, please contact Jessica Fernando at 607-274-3545 or jfernando@ithaca.edu.

The ALANA Academic Achievements Awards Banquet invites the Ithaca College community to attend this event where students will receive awards due to their academic successes and community involvement.

Jason Diaz ’09 will be the keynote speaker for the banquet. Diaz has recently served as a postdoctoral fellow in biological sciences at the University of Pennsylvania, and this fall, he will begin as an assistant professor in  the
Integrated Science, Business, and Technology Department at LaSalle University.

If people would like to attend, email Yolanda Clarke at yclarke@ithaca.edu to reserve
a space.

The guide has been published annually since 1992, and only 15 percent of colleges are included in the 2018 edition.

The college ranked second on the Princeton Review’s “Reefer Madness” list, which is determined by how widely marijuana is used at the college. The college also ranked  tenth on the “Tree-Hugging Vegetarian” list.

Cortese, who has previously worked as a HEOP Counselor and as an academic adviser, currently serves as assistant director of the HEOP and AHANA Programs at LeMoyne College. She has a Bachelor of Science in psychology and social work from SUNY Brockport and a Master of Social Work from Syracuse University.