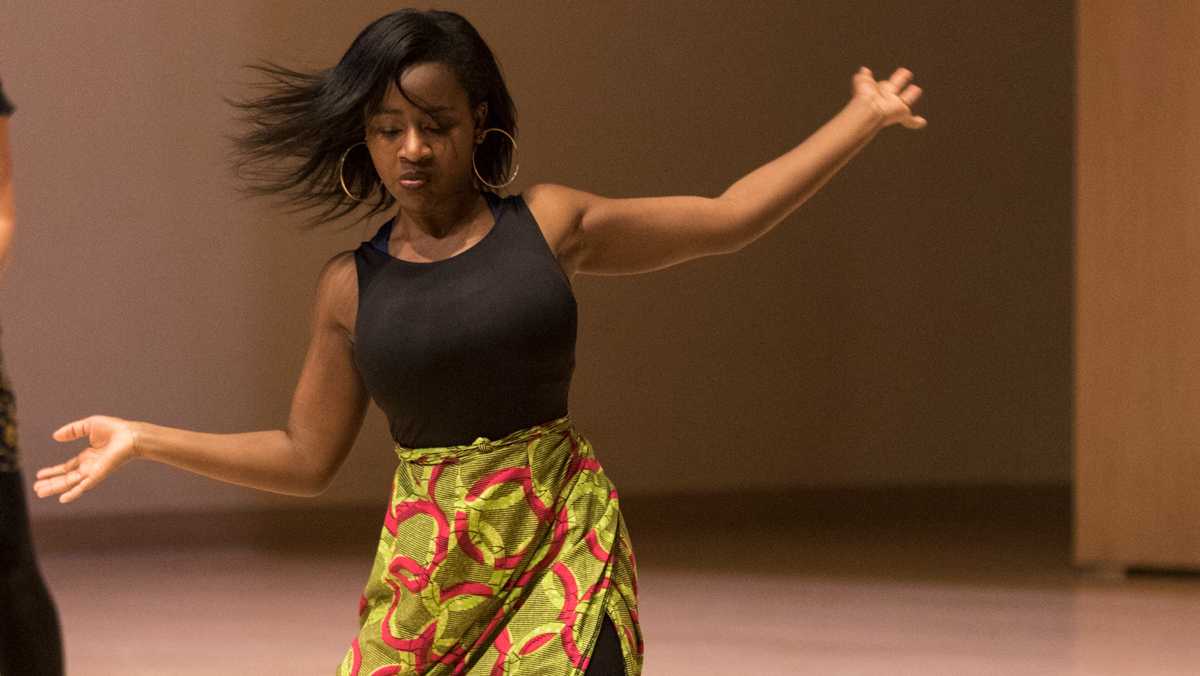 Ted Zerivitz/ The Ithacan
Senior D’Laney Bowry and other dancers participated in a Nov. 28 event held by the IC West African Drumming Ensemble. There, dancers performed to music inspired from various Ghanaian tribes. The group used many instruments, including the djembe, the djil, gangkogui bells, shakers and talking drums while performing.
By The Ithacan
Published: November 29, 2017

Searle earned this honor by having an average of over 98 percent in the academy’s academic coursework. She is now working to complete her on-campus field training, so she will be meeting many new members of the campus community as training progresses.

The Alternative Spring Break program is an opportunity for community service, meeting new students, and personal growth. This year, trips will take place from March 10 to 17.

Applications for the Alternative Spring Break program that are received on or before 5 p.m. Dec. 1 will receive priority selection.

This year’s Alternative Spring Break trips will rebuild homes for the elderly with the Pittsburgh Project in Pittsburgh, Pennsylvania; turn wasted food into balanced meals with D.C. Central Kitchen in Washington, D.C.; volunteer at Kiptopeke State Park in the Chesapeake Bay in Virginia, help ensure a healthy and productive coast with the North Carolina Coastal Federation; and help fight poverty and create opportunity with CASS Community Social Services in Detroit, Michigan.

Viewing of night sky to be held at Clinton B. Ford Observatory

The Ithaca College Department of Physics and Astronomy is holding a viewing of the night sky from 8 p.m. to 10 p.m. Dec. 1 at the Clinton B. Ford Observatory on campus.

A shuttle van will make runs to pick attendants up from Lot F outside Smiddy Hall and the Center for Health Sciences. All attendants must take the shuttle, as there is no parking at the observatory.

If the weather does not allow a clear view of the sky, a decision to postpone the event will be announced at 3:30 p.m. Dec. 1.

More information can be found at https://www.ithaca.edu/hs/depts/physics/clintonbford/openhouses/.

Maria DiFrancesco, professor of Spanish and chair of the Department of Modern Languages and Literatures, won Symposium’s Harold G. Jones Award for Best Senior Scholar Essay published in the journal from 2015 to 2017.  The award winning essay is titled, “Facing the Specter of Immigration in ‘Biutiful.’” The award comes with a $1,000 prize.

The editorial board invited DiFrancesco to a celebratory reception that will be held at 5 p.m. Jan. 6 at the Taylor & Francis booth at the MLA convention in New York City.

Daniel Pascoe, executive director of Career Services, presented at BIESTRA, Chile’s Biennial Conference on Higher Education and the World of Work. He was one of three keynote speakers at the event.

His keynote topic, “A Systemic Approach to College Student Career & Professional Development,” was presented in Spanish and broadcast via streaming media.

The video, in Spanish, can be viewed at https://www.youtube.com/watch?v=4PxCu7ewlE.

The Center for Faculty Excellence is offering an excellence institute in inclusive course design. The Early Career Excellence Institute is a yearlong opportunity. Participants work in faculty learning communities to problem-solve, design and reflect on course changes. This is a chance for faculty across campus to build substantive interdisciplinary relationships regarding pedagogical intention and access in student learning.

Only 15 participants will be accepted. While all faculty can apply, preference will be given to early-career faculty. Detailed information and the full application can be found at https://www.ithaca.edu/cfe/. Applications are due to the CFE Jan. 2.

Karl Paulnack, dean of the School of Music at Ithaca College, has been re-elected to the Commission on Accreditation of the National Association of Schools of Music. The 18 elected members of the Commission have the authority to grant or deny accreditation for music programs in the United States. This authority is given to them by NASM. NASM reports to the U.S. Department of Education and is an accreditor for about 650 accredited programs across the country.