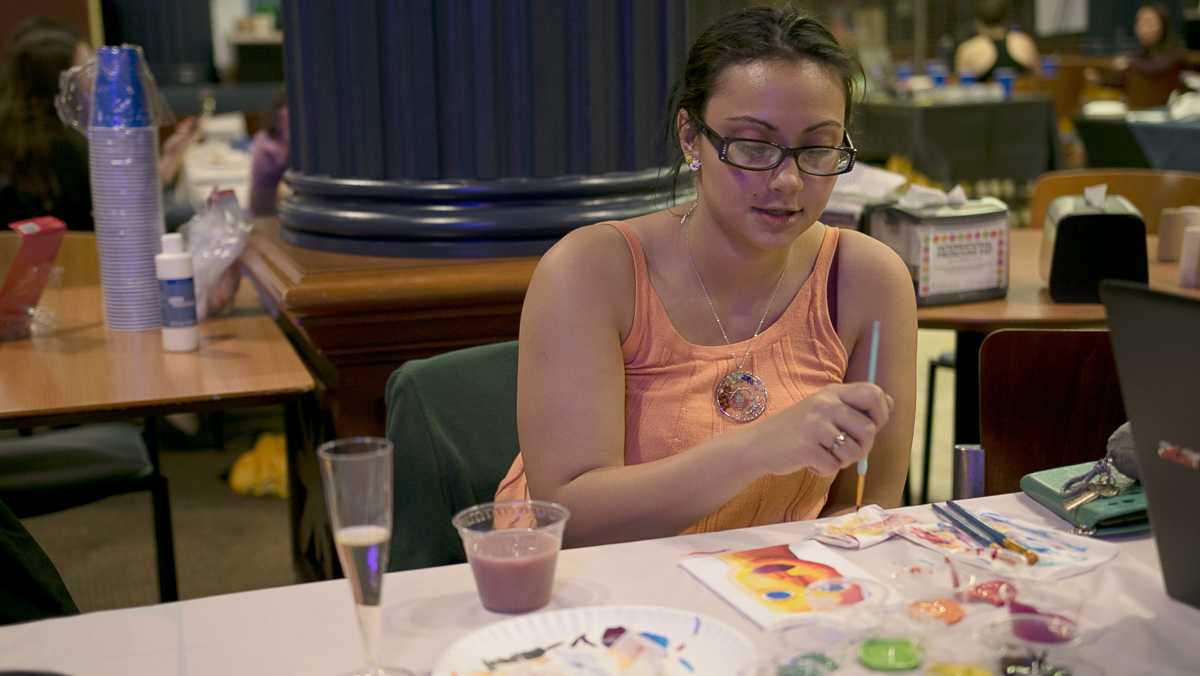 Alison True/The Ithacan
Senior Diana Mejia paints as part of a sip-and-paint event Nov. 1. Students attending the event in IC Square could paint and win prizes. To implement more events, a Campus Center Planning Board was created this semester.
By The Ithacan
Published: November 6, 2019

The Center for Inclusion, Diversity, Equity and Social Change (IDEAS) is hosting an indigenous peoples month event, “IC Voices: Activism is Our Legacy,” at 6 p.m. Nov. 12 in Clarke Lounge. The event will focus on Ithaca activists and their impacts. It will feature Peyton Falk, indigenous student activist for native rights. IDEAS is beginning a new long-term project to document the different activism activities of Ithaca College students. For the project, IDEAS is interviewing activists, asking them about themselves, their activism and their visions for the future. During every heritage month, IDEAS will feature one live interview for the public. The featured activist will speak about their experience and audience members will have the opportunity to ask their own questions.

Cinemapolis will host the Outer Docs Film Festival from 2 to 10 p.m. Nov. 10. The theater is selling a pass for the whole day or for one of the four block showings. Tickets to stay for the entire festival cost $25 while each individual showing will have a ticket price of $8 if bought in advance or $10 at the door. The four showings will be “Searching for Community” at 2 p.m., “Nature’s Giants” at 3:30 p.m., “Life and Death” at 5:15 p.m. and “Roads Less Travelled” at 7:30 p.m. Outer Docs is an award festival designed to celebrate documentaries that are outside of what is typically considered normal.

In honor of this year’s family weekend, Hillel at Ithaca College is organizing a kabab dinner for Shabbat and will be hosting its annual family bagel brunch Nov. 10. The family weekend Shabbat service will begin at 6 p.m. Nov. 8 in Muller Chapel. The service for this weekend is egalitarian and designed to be accessible to individuals from both Conservative and Reform backgrounds. Dinner will be served at 7 p.m. after the service. Both chicken and vegetarian options will be offered. All food served will be kosher.The bagel brunch will be from 11 a.m. to noon Nov. 10 inside the upper atrium of the Business School. Both hechshered and kosher-style food will be provided.

The Park Center for Independent Media is hosting a conversation between Patricia Zimmermann, professor in the Department of Media Arts, Sciences and Studies, and Girish Shambu, film blogger, scholar and critic. The event is free and open to the public. The event is at 8:30 p.m. Nov. 8 in Textor 103 and will be the launch of Zimmermann’s new book, “Documentary Across Platforms: Reverse Engineering Media, Politics, and Place.” The book highlights documentary’s role as a practice to examine how the world is organized and to imagine ways that it might be reorganized with actions, community and ideas. The book will be available for cash purchase at the event. Zimmermann specializes in documentary, emerging nonfiction forms, amateurism and participatory media, industry studies and democratic potentials of communications. Shambu also edits Film Quarterly’s online initiative, Quorum. He teaches sustainability at Canisius College in Buffalo.