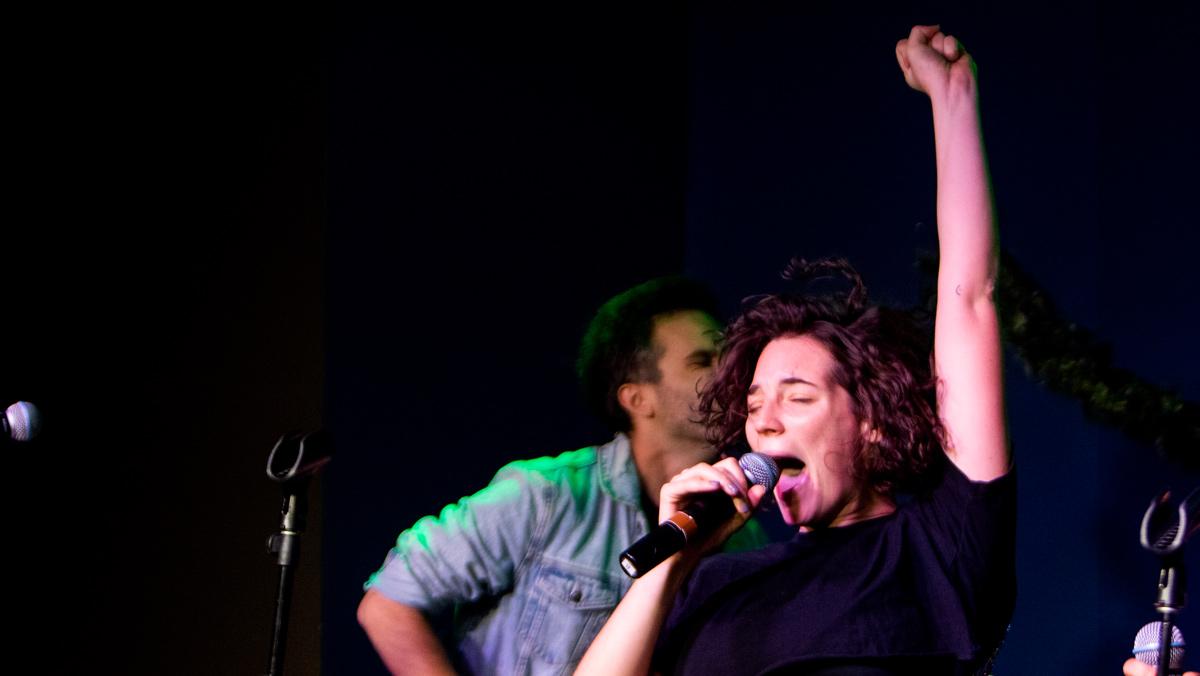 Alison True/The Ithacan
Sammy Rae & The Friends perform Sept. 26 at IC Square. The singer and songwriter joined with friends to create the band after the release of her 2016 LP, “Sugar.”
By The Ithacan
Published: October 2, 2019

Readers of the Ithaca Times and residents of Tompkins County voted WICB, Ithaca College’s student-run radio station, the best noncommercial radio station in Ithaca. The recognition was included in the local publication’s Best of Ithaca 2019 insert Sept. 25. The insert stated WICB has a wide enough selection of content to appeal to anyone. WICB is housed in the Roy H. Park School of Communications and broadcasts programming 24 hours a day, seven days a week, 365 days a year. The station broadcasts to the local Ithaca  community on 91.7 FM and streams at wicb.org, iHeartRadio and TuneIn. WICB can also be streamed using the station’s iOS app.

Cohost of ‘Democracy Now!’ to present on distortions of mainstream media

The Park Center for Independent Media will bring journalist Nermeen Shaikh, producer and cohost of “Democracy Now!,” to present “The Crisis of the Media-Industrial Complex” at 7 p.m. Oct. 3 in the Center for Natural Sciences. She will speak about the fallacies and distortions of mainstream media and how independent news outlets like “Democracy Now!” provide an urgently needed corrective. Shaikh is the author of “The Present as History,” published by Columbia University Press. She regularly speaks on issues ranging from contemporary news media and film to politics and literature. She has presented for the United Nations and the American Psychological Association and at events
including TEDxDanubia Hungary, the Toronto International Film Festival, the New Literature from Europe Festival and others.

The 2019 Ithaca Pan Asian American Film Festival will screen two films, “Transfinite” and “Afterearth,” from 5 to 7 p.m. Oct. 4 at Cinemapolis. The event is free and open to
the public. “Transfinite” is a sci-fi omnibus feature film composed of seven standalone short stories where supernatural trans and queer people from cultures use their powers to protect, love, teach, fight and thrive. Director Neelu Bhuman will Skype the audience following the film for a question-and-answer segment. “Afterearth” is a 13-minute narrative about the fight of four women to preserve their homelands of Hawaii, the Philippines, China and North America. Screenwriter Kit Yan will be in attendance for a question-and-answer segment after the screening. They will present an on-campus talk from 12 to 1 p.m. Oct. 4 in Clark Lounge.

‘Dust-Flower-Flame’ film to screen at Muller Chapel with discussion

The Office of Religious and Spiritual Life will screen the film “Dust-Flower-Flame” at 4 p.m. Oct. 8 in the Muller Chapel. The documentary is about the life of Táhirih Qorratol-eyn, whose presence in the women’s equality movement in the 19th century during the reign of Qajar has continued up until today. The film will be followed by a discussion on the life and legacy of Qorratol-eyn led by Omid Ghaemmaghami, associate professor in the Department of Classical and Near Eastern Studies and director of the Middle East and North Africa Studies program at Binghamton University. He is currently editing a series of articles dedicated to advancing research on the life, writings and legacy of Qorratol-eyn.

Cornell government professor to talk about health equity and democracy

Jamila Michener, assistant professor in the Department of Government at Cornell University, will speak about health equity and democracy at 7 p.m. Oct. 7 in Textor 101. The event is sponsored by the Department of Health Promotion and Physical Education and the dean’s office of the School of Health Sciences and Human Performance. Michener is the author of “Fragmented Democracy: Medicaid, Federalism, and Unequal Politics.” She studies American politics and policy with a particular focus on the political causes and consequences of poverty and racial inequality. Michener’s research has been supported by the Institute for Research on Poverty, the Woodrow Wilson Foundation, the Russell Sage Foundation, the National Science Foundation, the Robert Wood Johnson Foundation and the Ford Foundation. Her public writing has been featured in The New York Times, The Washington Post, Vox, Salon and other outlets. Michener is also a co-leader of the Finger Lakes chapter of the Scholars Strategy Network, an organization focused on bringing academic research to policymakers, civil associations and the media. Prior to working at Cornell, she was a Robert Wood Johnson Health Policy Scholar at the University of Michigan. She received her masters and Ph.D. from the University of Chicago.