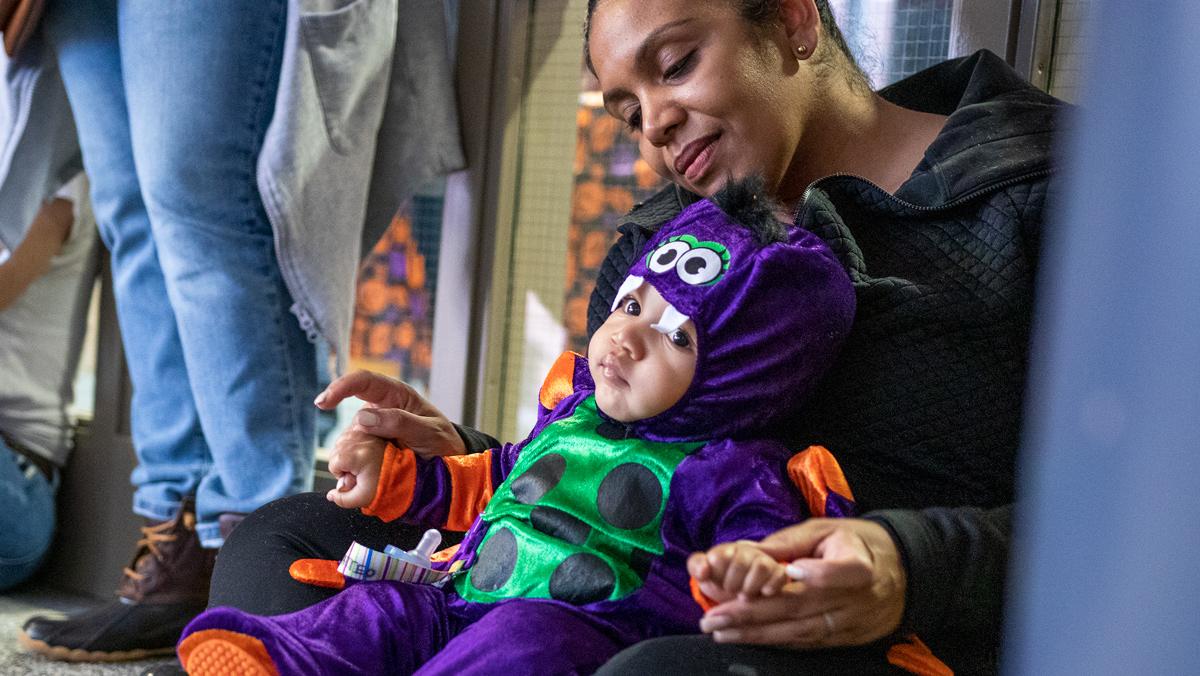 Chloe Gibson/The Ithacan
Rosanna Ferro, vice president of the Division of Student Affairs and Campus Life, sits with her son Matteo on Oct. 27 in Emerson Hall. Students decorated their dorms and gave candy to children of Ithaca College faculty and staff at the annual event.
By The Ithacan
Published: October 30, 2019

College to screen documentary as part of LGBTQ film series

The Out of the Closet and Onto the Screen LGBTQ film series will screen the documentary “The Lavender Scare” at 6 p.m. Nov. 5 in Textor 103 at Ithaca College. The event is free and open to the public.

The Out of the Closet and Onto the Screen series is sponsored by the Center for LGBT Education, Outreach and Services.

The film tells the story of a campaign by the federal government to identify and fire all employees suspected of being gay or lesbian. In 1953, President Dwight D. Eisenhower declared gay and lesbian employees a threat to national security and unfit for government service.

Over the next four decades, tens of thousands of government workers lost their jobs for no reason other than their sexual orientations. This inadvertently helped ignite the gay rights movement.

The Cornell University Police Department said in a statement released Oct. 26 that police recovered the body of Antonio Tsialas, who was reported missing Oct. 25. His body was recovered from Fall Creek by Ithaca Falls.

The department said that the circumstances of Tsialas’ death are still under investigation but that no foul play is suspected. The statement said there is no other information available about his death.

In the initial investigation, the police learned that the suspect forcibly touched two victims. The suspect fled the area prior to the arrival of Ithaca police officers, the press release said.

The press release described the suspect as a white male in his mid 20s with a prominent jaw line, short blond hair and a slender build. He was said to be wearing a white T-shirt.

The Ithaca Police Department is asking for additional resources or anyone with information regarding the possible identity of the suspect.

The police tipline can be reached at (607) 330-000 and anonymous tips can be reported at www.cityofithaca.org/ipdtips.

The Center for Counseling and Psychological Services is hosting a coat drive.

Coats can be dropped off or picked up in the hallway outside of CAPS, which is in the lower level of the Hammond Health Center, during business hours from 8:30 a.m. to 5 p.m., Monday  through Friday.

CAPS is collecting winter coats of all sizes and styles that are either new or gently used, clean and free of tears or rips. All members of the campus community are welcome to pick up a coat if they need one.

Faculty and students present at conferences over fall break

At the New York Physical Therapy Association’s Conference in Saratoga, New York, Laura Gras, associate professor, chair and graduate chair in the Department of Physical Therapy; Deb King, professor in the Department of Exercise and Sport Sciences; Josh Tome; research biomechanist in the School of Health Sciences and Human Performances; and senior Courtney Yehl presented the poster “A Comparison of Two Walking Programs on Balance and Gait in Older Adults who reported Being Fearful of Falling.”