President Barack Obama announced his $77.4 billion spending proposal Monday, which would reduce support for higher education by $89 billion over 10 years. In light of this issue, colleges and universities — including Ithaca College — are stepping up appeals to alumni and other private donation resources for funding. 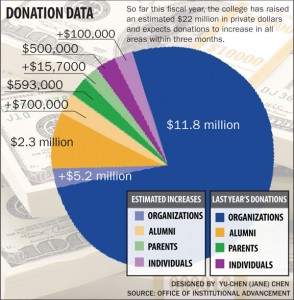 Shelley Semmler, vice president of the Office of Institutional Advancement, said the college has raised $22 million in private dollars to date this fiscal year, which is $6.7 million more than was raised the previous year  from alumni, parents, other individuals and organizations. The fiscal year runs from June to May.

If Gov. Andrew Cuomo’s proposed $132.9 billion state budget is passed April 1, state funding to the college would be cut by 10 percent and may cause tuition and room and board fees to increase. Semmler said institutions will most likely turn to their alumni with stronger appeals when they go through economic downturns.

“That’s one of our strategies: to help alumni realize that their dollars, no matter how big or small, collectively make such a difference in being able to either bring tuition down or financial aid up,” she said.

William Kay, director of Office of Corporate and Foundation Relations, said though these proposed budget cuts are not directly related to the college’s fundraising efforts, they will be increasing its efforts because scholarship support is a critical area of need.

Semmler said since 85 percent of students are on some kind of scholarship, financial aid or merit, her office sees upticks when they put out an appeal for scholarship support.

“Most of our students are getting help, so it’s a great thing to pass on, and when there are budget cuts, that’s the area I think where you see the most interplay,” she said. “[Alumni] understand from their own situation that the financial aid is so important.”

Out of the $15.3 million the college raised last year, Semmler said $2.3 million came from alumni. She said contributions from alumni would be above this figure and hopefully close to $3 million this year.

Kay said the college’s operating budget is made up of tuition and fees, endowment income and a smaller amount from private dollars. These private dollars make up the Ithaca Fund, which brings money to the college on an annual basis.

“[The Ithaca Fund] contributes to a different set of programs on campus,” he said. “It’s not so much the big dreamy projects. It’s more about enhancing programs within each of the schools with a steady stream of income, and that really requires reaching out to the broadest number of alumni.”

Semmler said it is harder to raise money for unrestricted purposes than for smaller gifts. She said individuals’ collective giving encompasses the Ithaca Fund.

“It’s all part of a general strategy to raise as much money as we can from as many people as we can and hopefully to have those numbers increase every year because the needs just keep getting greater,” she said.

Currently, the college is in the early phase of several other mini campaigns, including one to raise money for the men’s and women’s crews to build a new boathouse.

“At any given time, we are juggling a whole number of things in terms of what can come from the budget, from tuition and what can come from outside money,” she said. “We knew we could raise money for a boathouse from people who wanted to get a boathouse. So, we took a project that was identified and needed and lined it up with the feasibility of raising money.”

Kay said competition among colleges and universities for foundation dollars has increased because of the lack of funding elsewhere.

“Competition there has gone up dramatically,” he said. “At the same time, there’s been a lot of investment in K-12 education and so there’s even less support from foundations that’s accessible.”

For the 2010-11 fiscal year, only 84.5 percent of student’s education — including basic operating needs for the college — was covered by tuition, Carl Sgrecci, vice president of finance and administration, said.

Semmler said the money from alumni donations is just one of several resources that cover the remaining 15.5 percent of costs.