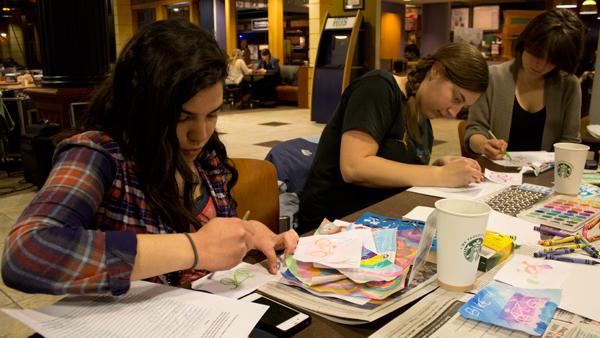 Sabrina Knight/The Ithacan
From left, senior Jess Wunsch and junior Moriah Petty paint with watercolors for the Bomber Bike Initiative, one of 10 groups that had a table at the IC Water Week event Tuesday in IC Square.
By Noreyana FernandoSabrina Knight — Assistant News Editors
Published: March 21, 2013

IC Water Week, which took place Tuesday and Wednesday, was initiated by student group Take Back the Tap, which organized events and invited 10 campus organizations to help spread awareness among the campus community with art, brief animated discussions and a film screening.

The week also falls in line with World Water Day, which is set for Friday. In 1992, the U.N. General Assembly dubbed March 22, 1993, the first World Water Day, a day set aside to focus on the importance of fresh water and the management of freshwater resources.

As a part of the celebrations, Take Back the Tap also organized a screening of the 2008 film “Blue Gold: World Water Wars.” The film looks at examples of people across the world fighting for their right to water through court cases, revolutions and U.N. conventions.

Sophomore Leonard Slutsky, vice president and co-founder of Take Back the Tap, said through this initiative, they hope to unite different student organizations on campus that are related to sustainability and environmental efforts, while spreading awareness of world water issues.

“People need to talk about access to clean and free drinking water,” Slutsky said. “At some locations across the globe, drinking water is not accessible. You have to walk miles and miles to get your water.”

Rita Schmidt Sudman is executive director of the Water Education Foundation, which educates the public about water issues in the U.S.

She said people on the West Coast are increasingly using groundwater, which is being depleted, while on the East Coast, water quality issues are more prevalent.

“As the world and the United States face this increased water issues and problems, I believe [the college-age] generation will really be forced to engage in it.”

“In food service, we usually run across that,” Piech said. “We use water a lot to prep and clean and cook, and it’s definitely interesting and important from a sustainability perspective to bring that up and say: You know, it’s not just about saving paper, it’s also about water use.”

At the IC Water Week Celebration on Tuesday, Piech said Ithaca Dining Services also promoted the organization’s Meatless Monday campaign. Piech used M&Ms to help students visualize how much water is used in the production of certain foods. She said meat-based foods use more water to process than vegetable-based foods.

Alyce Daubenspeck, sustainability representative of REMP, also ran a table at the IC Water Week Celebration on Tuesday. She said she supports conversation on the issues of consumption and pollution of water.

“World Water Day is great, because it’s showing personal changes you can make,” Daubenspeck said. “It is providing what the issues at hand are, locally and globally. It’s a very fun and informative event.”

Marian Brown, special assistant of campus and community sustainability, was also present at the IC Water Week Celebration on Tuesday, when she represented the Office of Civic Engagement.

“I want to bring a little bit of a different message to the table, and that is getting folks to think about how they are using water in general,” Brown said. “One is drinking water, but the other is wash water, shower water, in this case. [I] want to get people to think about energy and especially carbon emissions.”

Water use across the world has been growing at more than twice the rate of population increase in the last century, according to the U.N. Food and Agriculture Organization. Between Nov. 16, 2011, and Nov. 15, 2012, the college consumed more than 162 million gallons of water, according to data from the Office of Business and Finance.

The college has implemented several measures to reduce water consumption on campus. The two LEED Platinum buildings, the Peggy R. Williams Center and Park Center for Business, currently practice rainwater harvesting, a system where rainwater collected in cisterns under the buildings is used for toilet flushing and outside irrigation. Bathrooms in the two buildings, along with bathrooms in Dillingham Center, use a dual flush system, a toilet system that helps conserve water by using two separate flushes for solid and liquid waste.

Daubenspeck said it is important to get involved in awareness initiatives.

“We take for granted what we have here in terms of water resources, and the purpose of getting involved in this is to show that you need to be aware of your actions and your habits,” Daubenspeck said.