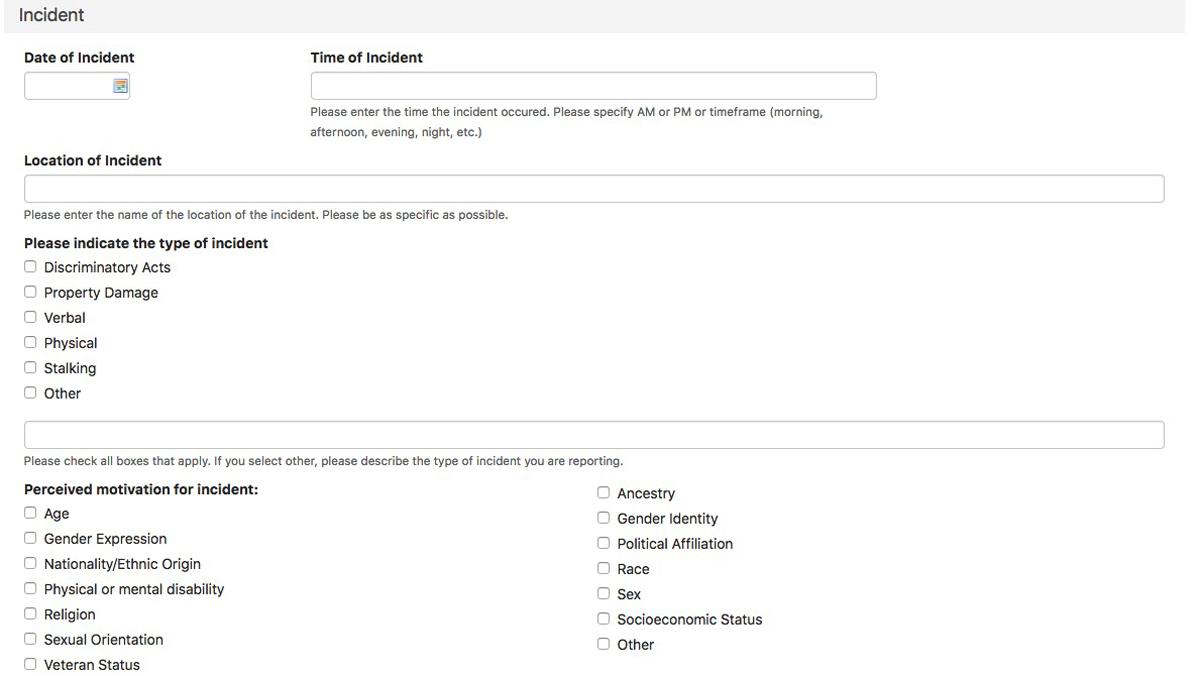 IC Workflow
The college has created a new online resource, the Bias Impact Reporting Form, a new online system for students, faculty and staff to report instances of bias. The form can be accessed online via IC Workflow.
By Cody Taylor — Contributing Writer
Published: October 9, 2018

Members of Ithaca College’s senior leadership team announced via email that the college has rolled out its pilot program for a new online system for students, faculty and staff to report instances of bias: the Bias Impact Reporting Form.

Submissions will be reviewed by the Bias Impact Resource Team, according to an article the college released. The system, however, is not designed to act as a substitute for formal methods of filing complaints. It will instead act as a referral system so that people who experience bias can get connected to the resources and options they might need to handle the situation. Individuals using this system cannot report bias-related incidents anonymously, and users can access the form through the online portal IC Workflow.

The form will serve as an additional way for community members on campus to share their experiences with bias-related incidents without the obligation of taking formal action, Title IX Coordinator Linda Koenig said.

“Our main goal is to provide people an opportunity to have another place to submit experiences that they have on campus,” Koenig said. “What we want to do is encourage reporting and understand what people are experiencing.”

The results of the campus climate survey conducted in Spring 2017 contributed to the creation of the initiative. The reporting system was recommended in an assessment of Public Safety conducted by Margolis Healy, an external consulting firm, in 2016.

The process begins when college community members submit an online form. They can upload photos or videos, but additional media is not required. The information is sent directly to the team. Form users can also specify whether or not they want to be contacted.

Once a concern is submitted to the bias impact form, Koenig said, the concern will be looked at thoroughly by the team and passed along to the most relevant department at the college. The department that receives the concern will then walk the community member who submitted the report through their options. The reporter could partake in an optional one-on-one conversation. If needed, the community member will be referred to Public Safety or law enforcement to further deal with the situation, she said.

Koenig said having a large number of people on the Bias Impact Reporting Team will be beneficial when addressing issues of bias on campus since the team members have a variety of expertise.

“Having a team of people who can look at a report and identify who on the team is in the best position to respond to the particular concern and/or collectively for us to put our heads together to support that individual the best way we can and offer as many options as possible,” Koenig said. “I believe that most individuals don’t intend to hurt somebody’s feelings or say something that is targeted at someone’s identity.”

The team plans to meet regularly and will report a compilation of all of the submissions to an advisory board at the end of the semester. The advisory board will consist of approximately 30 individuals, including faculty members, deans, human resources members, students and legal counsel. The board will review the data and reporting system.

“The frustrating and limiting part of the team is that it is not an investigative team, so we’re not investigating the report,” Fox said. “Any kind of treatment that you feel is biased is worthy of a report. … Everything is important.”

Public Safety director Bill Kerry said the reporting tool is being implemented as a means to compile a concrete database of the number and types of bias–related incidents that occur on campus.

“One of the reasons for this new reporting tool is that we, as a college, do not know how many incidents are occurring because there hasn’t been a centralized reporting option, and this form allows for that,” Kerry said. “In short, the form is not intended to replace formal complaints. … It’s intended to connect people to the full array of options, which allows them to then go in the direction that they are comfortable.”

Sophomore Eden Strachan said having a platform to share incidents of bias that occur on campus will give students and community members an opportunity to voice their experiences freely.

“I think it’s absolutely a step in the right direction to have a platform that people can express their experiences on,” Strachan said. “I think that it is a really good step for our college and our community, especially with incidents in the past of people saying that they are not being heard.”

Sophomore Tara Griffiths said that not every act of bias requires legal action and that the Bias Impact Form acts as a useful resource by providing new options for students and community members.

“I think it’s a good thing because if people feel as though they are being discriminated against but do not want to necessarily take legal action then it is good that this option exists,” Griffiths said. “If someone was discriminating against me, I don’t think I have the capacity to take legal action against them, but I would also like there to be consequences or a solution to the issue. I feel like this is a good middle ground.”

Kerry said the form was created to serve the community and may be subject to improvements based on community feedback.

“This is a pilot, and we will be seeking feedback from the community and the Bias Impact Advisory Committee,” Kerry said. “This resource is community-based, and it’s important for the members of this community to be able to have the opportunity to help provide input towards what the ‘final’ version of this will be.”