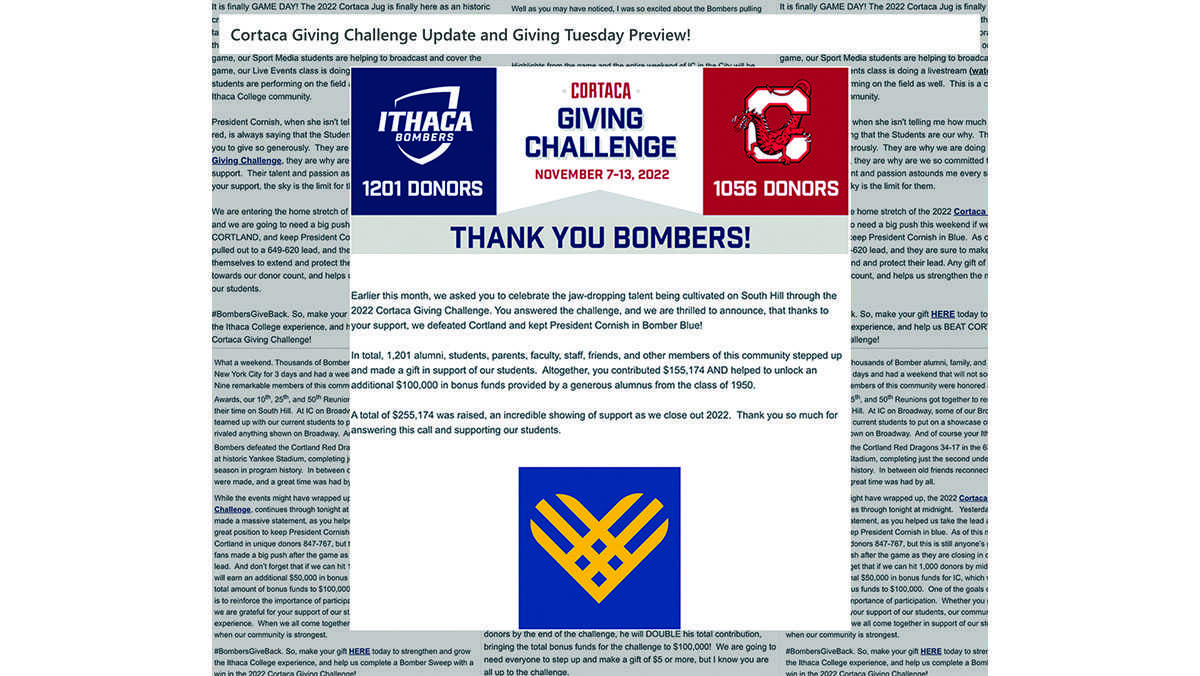 Screenshots pulled from Ithaca College email communications to current students, alumni and other members of the campus community asking for donations in the Cortaca Giving Challenge.
By Noa Ran-Ressler — Staff Writer
Published: November 30, 2022

Ithaca College is changing its approach to alumni engagement, focusing on creating relationships with alumni beyond financial contributions.

Tanya Hutchins ’89, president of the college’s Alumni Association Board of Directors, said alumni donations can be divided into three categories: time, talent and treasure. Time donations include attending alumni events and visiting classrooms. Talent donations include mentorship and career assistance for past and current students. Treasure donations include financial contributions and fundraising.

A recent financial opportunity was Giving Tuesday on Nov. 29, where alumni and family could donate to support Prunty’s Pantry, the food pantry on campus. The funds raised will be used to purchase supplies to stock the pantry and improve storage systems to increase the shelf life of products.

Brett Bossard ’95, executive director of Alumni and Family Engagement, said that while financial donations — “treasure” — are important, he wants to encourage alumni to form a relationship with the college beyond fundraising campaigns. He said the college is working on developing a plan to re-engage alumni.

Another facet of the college’s alumni engagement plan is President La Jerne Cornish’s year-long tour around the country and abroad, called Ithaca Together. The goal of the tour is to connect with college alumni, family and friends in person, but it also provides remote opportunities for people who can not make it to one of the 20 tour stops.

“Because we have become so familiar and accustomed [to] meeting remotely and meeting virtually, we’re really about to roll out a whole package of … online Zoom methods of reconnecting alums with experts on campus,” Bossard said.

Hutchins said one way of engaging alumni is by reactivating alumni chapters across the country, which had been dormant because of the pandemic’s restrictions. She said it is also important to get alumni on campus to share their experiences after graduating and to share career advice. Hutchins said she has been invited to guest lecture and mentor students in the Roy H. Park School of Communications.

“Sharing my talents and my journey … is the most rewarding thing for me,” Hutchins said. “Spending that time with students is golden. You can’t replace that.”

Hutchins said financial donations are meant to accompany donations of time and talent, especially around the time of the Cortaca Jug.

The 2022 Cortaca Giving Challenge ran from Nov. 7 to Nov. 13, centered around the Cortaca football game between Ithaca College and SUNY Cortland held Nov. 12 at Yankee Stadium.

Bossard said part of the college’s strategy to engage alumni is to create opportunities for them to donate by performing outreach during times when alumni could be inspired to give, like Cortaca.

“We’re using the excitement around Cortaca, around this occasion, to bring alumni back into the fold and give them a fun way to support the student experience,” Bossard said.

Maddy Blomkvist ’22 was one of 40,232 people in attendance at the game, and she said part of the appeal of the Cortaca Jug was its location at Yankee Stadium.

“I live in the city now. I have more than enough reasons to go to this game,” Blomkvist said. “I [did] not want to miss it.”

Hutchins said the game and alumni events that accompanied it were intended to reignite passion for the college among alumni, hopefully leading to monetary donations.

“[The college tries] to connect and engage with alumni as much as they can because once their passions are reignited, then that’s when they give,” Hutchins said.

According to Bossard, there are more than 20,000 alumni in the tri-state area. He said Yankee Stadium was a concentration point, similar to the 2019 game’s location at MetLife stadium in East Rutherford, New Jersey.

“It’s not an accident that both of these — outside of Ithaca and Cortland Cortaca games — were in the NYC area, MetLife and Yankee Stadium,” Bossard said. “It was really a way to try to connect with all of those alums that we already knew were in that geographic vicinity.”

Blomkvist said she thinks this Cortaca Jug and giving challenge were set up well because of the events that could bring in alumni.

“I think recognizing that New York City is an area where a lot of Ithaca alums end up … was very smart,” Blomkvist said.

In addition to attending the game, Blomkvist participated in the giving challenge. She said she used to work on Phonathon — a program where current students call alumni to ask for donations for the annual fund — when she was still at the college, and that helped her understand fundraising from a student perspective.

“I did have a lot of knowledge going into it about how the school uses [the money] and what it goes toward,” Blomkvist said. “Giving back is definitely something that’s important to me.”