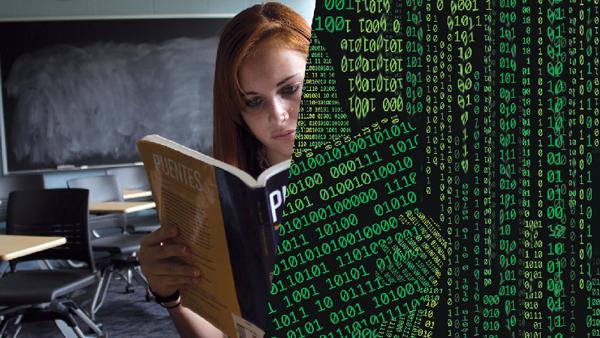 A worldwide trend toward online teaching and education give colleges and universities a means of delivering higher education globally to millions of students. Institutions are sharing entire courses with anyone with an Internet connection, leading Ithaca College to readdress how it will utilize online learning in the future.

IC 20/20 has charged the Task Force for Instructional Delivery Models with outlining how the college can offer more online courses and degrees and also enable students studying abroad or working in internships to take college courses from their computer.

This move represents a deeper engagement by the college with online learning. Five years ago, the college began offering professional development certificates for taking online courses with no academic credit. Now the college is calling to move more, but not all, of the college experience from the classroom to the online forum.

Rob Gearhart, assistant provost for online learning and extended studies, is the administrative co-chair for the task force. While online learning at the college can be beneficial, he said, it will only serve to supplement — not replace — traditional higher education.

“We have to do this all within what’s most beneficial to our campus environment,” Gearhart said. “We’re a residential learning campus. We recognize that learning happens in a lot of different places, not only in the classroom.”

Gearhart said the college set out to provide online learning to attract new populations of students, such as professionals seeking to develop their skills, and to support the existing student body, especially those studying away from campus.

Online learning at the college is designed to emulate the person-to-person classroom experience, with students interacting with course content, instructors and each other.

“We tend to promote online learning models that are more like our classroom learning models,” Gearhart said. “There’s an expectation that there will be interaction.”

Jack Powers, assistant professor of media, arts and sciences, taught Introduction to Mass Media and Introduction to Media Industries online over the summer, and he previously taught Research Methods online. Powers described teaching via Internet as “a mixed bag” for him so far. He said he is concerned about the loss of personal interaction in a physical classroom.

“There is this part of me that really believes that you can learn just as much in an online course as you can in a person-to-person class, in terms of content and material,” Powers said. “But I think education is more than just content and material. I think it’s also interaction.”

The college’s approach to online teaching differs from a national trend toward Massive Open Online Courses, or MOOCs, which offer online courses for no academic credit, but allow hundreds of thousands of students to interact with class material from courses at colleges and universities nationwide. Examples include Coursera, which was founded in April by two Stanford professors, and edX, which is a collaboration among MIT, Harvard and University of California, Berkeley.

With the increasing number of MOOCs comes a debate over what effect they will have on established colleges and universities. Coursera, for example, makes a college course normally taught in a room of 200 people available to potentially tens of thousands at a time, with a goal of worldwide availability and democratization of higher education. Ithaca College, however, has chosen to have its virtual classrooms resemble their physical counterparts as closely as possible. Gearhart said the college keeps tuition rates for online courses the same as for on-campus ones and caps the number of students in a class.

While there is concern that increasing dependence on free MOOCs will affect the value of or even replace a traditional college education, Forbes Magazine writes, the programs would not exist without the participation of the colleges and universities that would be affected.

Marilyn Dispensa, instructional technology coordinator at the college, said about 17 faculty members and a few staff members are enrolled in an Internet program from the University of Wisconsin to help them become more proficient online teachers. When the instructors complete the courses, Dispensa said, they will get a certificate in online teaching.

“The college helped fund the professors here to take that program,” Dispensa said. “Hopefully that will start to create more serious engagement with online teaching.”

Powers said online learning will be a great service to those not privileged enough to afford four years of higher education at a college or university. He said many professors have moved aspects of the classroom online, including grade submission and online reading material.

One area of trouble for fledgling online education programs has been cheating and plagiarism. In August, students in at least three Coursera classes doing peer-grading complained of plagiarism, even though no academic credit was offered. This month, edX announced it had contracted with Pearson VUE to offer proctored final exams at 450 locations in 110 countries.

Dispensa said professors use several methods to minimize cheating, including the use of 20-question tests made randomly from a pool of 100 questions. She said instructors can use the Turnitin feature, software that checks for plagiarism, on Sakai to check for plagiarism.

Initial student reaction to the college’s intersessional online courses has been positive.

Sophomore Ethan Shapiro, who took Powers’ online Introduction to Mass Media course over the summer, said he liked being able to study at his own pace.

“It almost makes me want to take all my classes online,” Shapiro said. “It’s a great tool.”

Powers said that, while online teaching and education is here forever, it will not fully replace the learning that takes places between students and professors in classrooms.

“I still think there will always be a place for person-to-person communication in an educational setting,” Powers said. “There’s a reason I teach here and not at the University of Phoenix.”