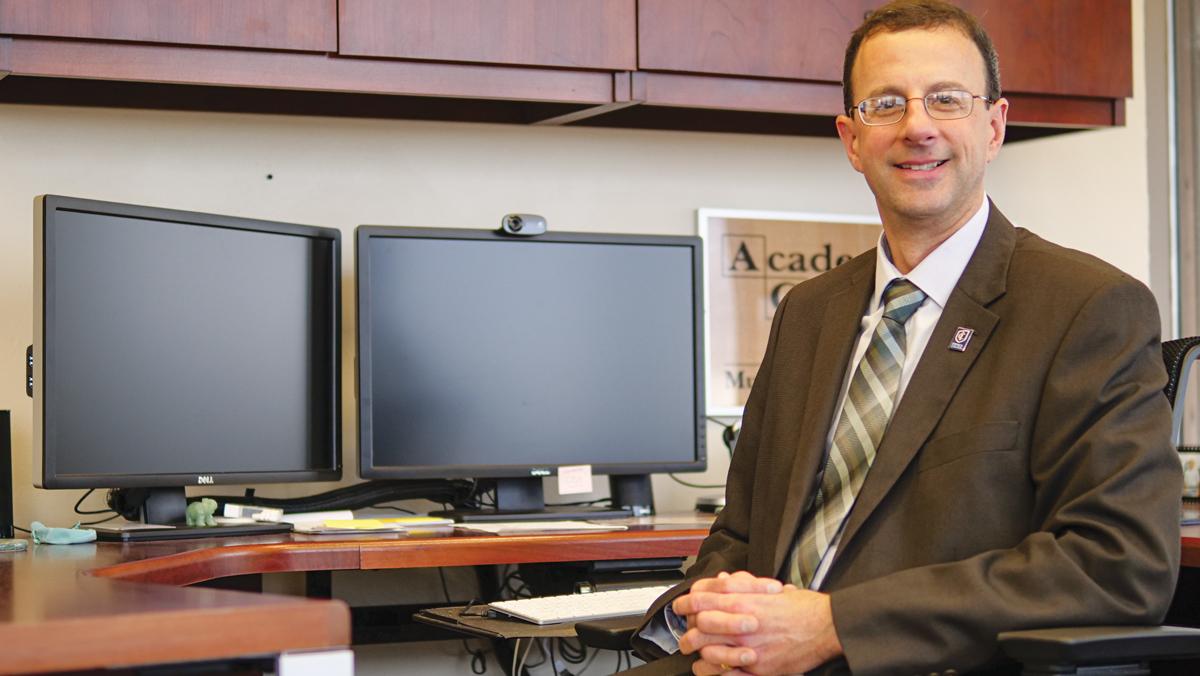 Elias Olsen/ The Ithacan
David Weil, associate vice president of information technology, is in charge of the tech side of creating an enterprise data warehouse. The project is being created in hope of collecting college data better. The project is expected to be done in three years.
By Sam Haut — Staff Writer
Published: November 29, 2017

A new enterprise data warehouse for Ithaca College is currently being developed and is expected to be completed in three years. The goal of the data warehouse is to better collect data that includes admissions, enrollment, salary and budget data.

The enterprise data warehouse is not a physical warehouse but a place where the college’s data —  from enrollment numbers, revenue, salaries, retention rates for staff and faculty, student class schedules, and everything else that can be expressed in numbers — will be stored and made more accessible through a cloud server. David Weil, associate vice president of information technology, who is in charge of the tech side of the project, said the EDW project began last June.

Weil said the current system the college has for data storage does not allow users to easily search for information, nor is it able to compare data in ways the EDW will. Weil said the EDW is only a step toward changing what the college does with different sets of data.

“The enterprise data warehouse is the underlying infrastructure,” Weil said. “It’s not really exciting in and of itself, but it builds the foundation for things that are really exciting, at least for us.”

Weil said an enterprise data warehouse can be used to create tools, such as a class recommendation tool, for everyone on campus to use.

Gerard Turbide, vice president of enrollment management, said he sees himself as a sponsor for the project by providing necessary data applicable to the EDW from his department. Turbide said the EDW can be used to recommend a student classes and clubs based on previous activities that student has done.

“When you interact with a student portal, a really rich data set will make that really easy for you to navigate all the great opportunities at this institution, maybe based on what you’re involved in and your behaviors, a portal like that might understand that,” Turbide said.

Weil said other schools are using student data to improve their curriculum and help support students.

“Other institutions that have implemented this kind of thing go, ‘You know, every year we lose 100 students from a particular school and 80 percent of them get stuck at this particular class and by the third week in that class, they’re failing out,’” Weil said. “And the earlier we have that information, the earlier we can help the student.”

The company setting up the EDW for the college is HelioCampus, a company that sets up data systems for colleges. They are currently working with several other colleges across the country to establish data warehouses and other systems of collecting data to make those colleges more efficient.

Susie Chang is the director of implementation services at HelioCampus and said the company has only been around since January 2016 and is currently working with eight other colleges to set up their systems. She said HelioCampus is helpful for the college, which would not be able to complete a project like this without outside help.

“For Ithaca, it’s not like they have a huge army of folks that can build IT, or they have different priorities,” Chang said. “So, if they can outsource some of it, they can have their staff work on different initiatives and spend more time on analysis and less time on building and I think it accelerates where they want to go.”

Turbide said if the college decided to set up the system on its own, it would be more expensive and take much longer than with their current collaboration with HelioCampus.

Chang said the first phase of the project consists of setting up the Banner system, which uses the data collected into the EDW to give the college administration access to the newly stored data. This data should be available at the beginning of the spring semester, Chang said. Weil said the college’s data will be fully integrated into the EDW in three years, while the project itself will continue beyond that indefinitely as more data is collected and added. Chang said HelioCampus is providing the software for the project, which the college will have to pay for as long as they have the system.

Yuko Mulugetta, chief analytics officer for the Office of Analytics and Institutional Research, is in charge of analyzing the data that is put into the warehouse. Mulugetta said HelioCampus is helping to build the EDW and the interfaces needed to interact with it.

“One of the reasons why HelioCampus has been a very attractive collaborator is that they are not just going to help us with laying the foundation, but they help us to build a lot of different analytics and dashboards, so it’s part of this big vision,” Mulugetta said.

Mulugetta said her office is working on a separate system to help define the data being put into the EDW, so the EDW knows what different terms mean.

Pete Young, senior vice president for business development at University of Maryland University College, a school that HelioCampus set up a data system for, said the system has helped improve inefficiencies at his college.

“They created a tool which teased out which courses were really ripe for redesign because people in general didn’t complete those courses, but fundamentally, it all came back to having visibility and having the transparency and better understand what is actually happening versus what people think is happening,” Young said.

Young said the system they have goes largely unnoticed by students who only see the results and not the system itself.

“I don’t know that the students are even aware or visible to it, so it’s kind of behind the curtain,” Young said. “Students have seen direct results of the analytics behind the scenes in the way of activity we pursue.”