Ithaca College joined more than 60 countries Tuesday in The 2010 Imperative: Global Emergency Teach-In, a Web cast about sustainable strategies that can prevent the contributions buildings make to global warming. 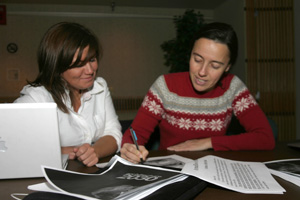 The live Web conference, held in Emerson Suites, focused on sustainable building techniques and was geared toward architects, planners, designers and other professionals in the building industry. It addressed strategies for curbing greenhouse gas emissions and the benefits of building green.

“It [gave] students an opportunity to learn from leaders in the design industry about environmental and sustainable design,” Schusler said.

Colleges around the country hosted the Web cast, including the Massachusetts Institute of Technology, Amherst College, New York University, Skidmore College and Penn State University. Other participating countries included Canada, China, Iraq, Egypt, France, Germany and Greece, among others. Brown said the college learned about the Web cast from the U.S. Green Building Council, which is certifying the new business school. The business school is incorporating sustainable design in order to become certified by the Leadership in Energy & Environmental Design (LEED) standards set by the council.

The Web cast was open to the public and hosted locally at five locations, including the college, Cornell University, a meeting of the Engineers for a Sustainable World at Cornell, CCETC and the Thomas Group on The Commons. Among its sponsors were the American Institute of Architects, the U.S. Green Building Council and the New York Academy of Sciences.

Audiences listened to speeches given in New York City by Susan Szenasy, editor of Metropolis Magazine and the moderator of the Web cast; James Hansen, director of the NASA Goddard Institute for Space Studies; Edward Mazria, founder of Architecture 2030; and Chris Luebkeman, director of Arup’s Global Foresight and Innovation Initiative. After speaking, the presenters fielded questions.

Lisa Paciulli, assistant professor of anthropology, said she attended the Web cast because she is developing a new biological anthropology course called Global Change. The class will discuss the hard science aspect of global warming as well as the human impact of the problem. Paciulli said though the information was gloomy, it gave participants ideas about how to alleviate the effects of global warming.

“The message [Hansen] was trying to give in the end is that there’s still time to make changes,” she said. “So we can actually avoid major climate change.”

Mark Darling, supervisor of the Resource and Environmental Management Program and adviser of the Ithaca College Environmental Society (ICES), said the Web cast helped highlight problems the college’s environmental groups can focus on.

“We are going to be lobbying the administration here in the future to establish green building standards for renovations when we renovate on campus,” Darling said.

Though building green is more expensive than building regularly, the Global Emergency Web cast wanted to show building industry professionals and other participants sustainability is worth the expense.

“It just pays for itself in reduced energy costs and in human comfort,” Brown said.

Senior Leanne Polachek, a member of ICES, said the event gave her hope about the future.