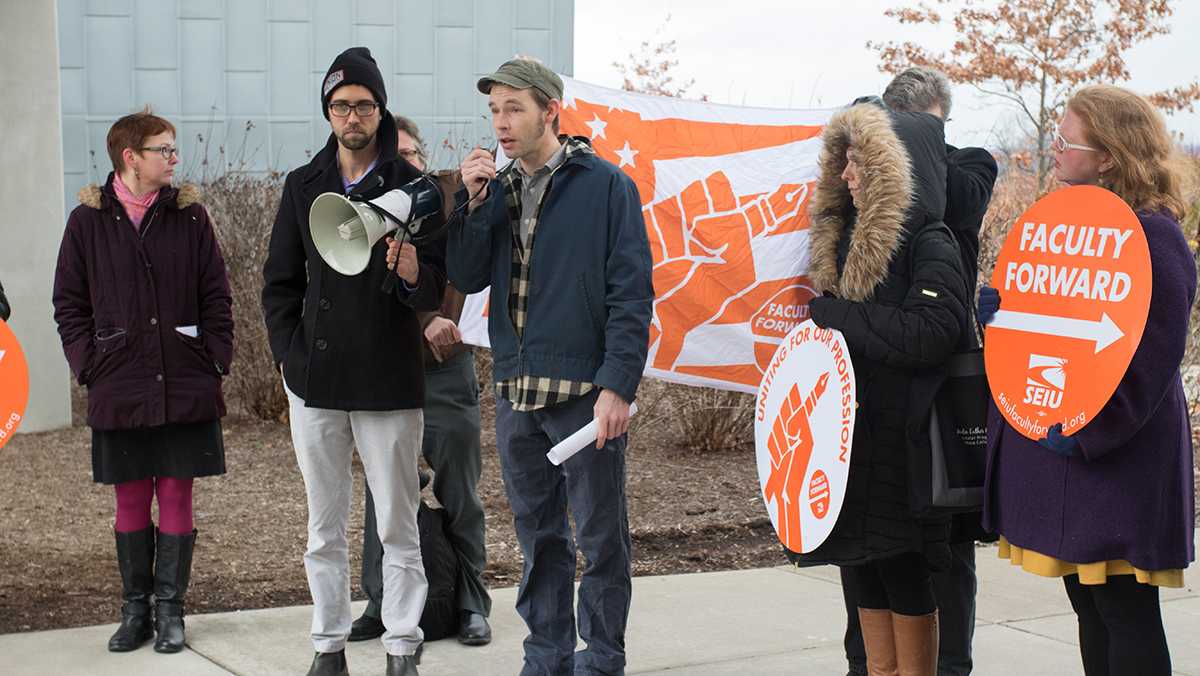 The Ithaca College contingent faculty unions have announced they will hold an on-campus vote Feb.13–14 to authorize a strike, following worsening bargaining negotiations with the college’s administration.

This does not mean a strike is guaranteed to take place if a majority votes for it, the representative said. The union committees make the final decision to hold a strike if they feel one is necessary. However, they also said that if the administration does not respond to the unions with an increased compensation proposal for part-time faculty and increased job security proposal for the full-time faculty, a strike is likely to happen.

The SEIU representative said no member of the contingent faculty unions is contractually obligated to strike if one should occur. Rachel Kaufman, lecturer in the Department of Writing, said that when the part-time faculty and full-time faculty elected to unionize, they did not do so under a contract — the unions were only recognized by the National Labor Relations Board.

The college’s bargaining committee released a statement expressing disappointment about the strike vote decision and stated that “significant and meaningful progress” has been made so far in the negotiations.

Throughout the bargaining process, Burroughs and other union members have made clear that a strike is a last resort. Burroughs said they feel they have been backed into a corner by the administration and that a strike may be the last option to make change.

“We’re really hopeful because we care really deeply not just about our jobs, but about where we work and the institution we’re fighting to be a part of,” Burroughs said.

Both Burroughs and the SEIU representative said they expect the strike vote will pass. However, some contingent faculty, like Kurt Lichtman, lecturer in the Department of Health Promotion and Physical Education, said he would not strike if one were to occur.

Lichtman said he has heard from a few other professors who support his vow to keep teaching if a strike occurs, but that he could not give an exact number on how many contingent faculty members would support a strike or not.

As of Feb. 7, nine departments at the college have publicly stated on Intercom their support for the contingent faculty unions and have refused to replace them if a strike occurs. The Ithacan previously reported that the administration is working with the deans of the schools to prepare to cover the classes of faculty who strike if necessary.

Burroughs said the contingent unions have discussed whether to ask tenured faculty to join the picket line if a strike were to occur but have not directly asked them to participate. The faculty handbook states that if a faculty member demonstrates a “serious and willful neglect of faculty duties and responsibilities,” they could receive a letter of warning and then eventually a letter of dismissal from the college. Such an outcome, Burroughs said, might take away from the issues the contingent faculty is trying to address.