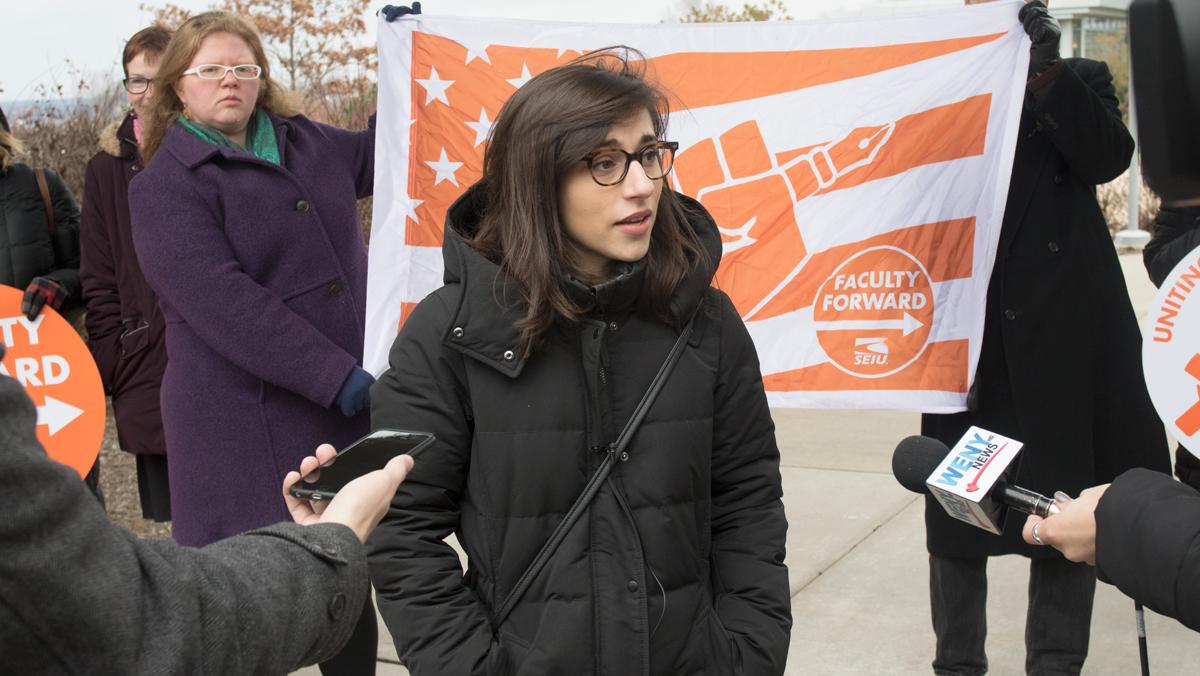 Fernando Ferraz/The Ithacan
Sarah Grunberg, a contingent faculty member, is pictured above briefing media on the unions' plans to initiate a strike vote early next semester if the administration does not respond to their demands.
By Grace Elletson — Assistant News Editor
Published: December 8, 2016

The Ithaca College administration has issued a statement criticizing the contingent faculty unions’ Dec. 8 announcement that they may hold a strike vote early next semester if the administration does not “substantively” address issues of compensation and contingency contracts.

“As the college’s bargaining team, we are disheartened and frustrated at the adversarial tone, misleading allegations, and willingness to disrupt the learning environment for our students,” the statement said. It was signed by Senior Vice President Nancy Pringle, Provost Linda Petrosino, and Professor Gwen Seaquist as representatives of the college bargaining committee.

The administration’s statement questioned the wisdom of the union’s tactics.

“We do not believe that disrupting the learning environment should be more appealing to our part-time faculty than remaining at the bargaining table to work through these final proposals of our negotiations,” the committee stated.

While the part time–faculty union and the full–time contingent faculty union have tentatively settled many smaller proposals with the administration, the two largest issues — compensation and contingency contracts — still need to be addressed.

“We have been bargaining with the administration for 15 months,” said Sarah Grunberg, instructor in the Department of Sociology, at a news conference held at noon Dec. 8 outside of the Peggy Ryan Williams Center. “We have not seen the administration work with us, especially in these past few months of bargaining. We’re now … in the process of considering a strike vote.”

During the Fall 2016 semester, the part time–faculty union had gone back and forth with the administration on compensation increases. Union members walked out of a meeting Sept. 23 in which the administration presented part-time faculty with a compensation proposal of a 2 percent pay increase per credit, up from an initially proposed 1.75 percent pay increase. Union representatives initially asked for a 42.8 percent pay increase per credit but came down between $250 and $275 — about a third — in this per-credit increase for professors who have taught at the college between one and three years. On Oct. 19, IC Students for Labor Action held a rally to garner campus support for both the part time–faculty union and the full-time contingent faculty.

A small group of contingent faculty, tenured faculty and students gathered for the news conference, during which they chanted “equal pay for equal work” into a bullhorn. The part time–faculty union recently issued a letter to the Faculty Council on Dec. 6 that the group is now distributing publicly, describing where the unions are in the bargaining process and what they are asking for from the administration.

The next bargaining session will be held Dec. 12. The college stated it would be open to adding additional bargaining sessions and bringing in a federal mediator, which is a third-party government official operating under the Federal Mediation and Conciliation Service agency brought in when negotiations are close to nearing an impasse or a strike. However, the contingent faculty union has expressed it does not want a federal mediator.

Brody Burroughs, lecturer in the Department of Art, said the union members do not want to bring on a federal mediator because they think the mediator will deliver a weaker contract, according to previous reporting by The Ithacan.

“A federal mediator is going to compromise both sides toward the middle,” Burroughs said. “And I don’t think that compromise, at this point, would be a strong contract for part-time negotiators.”

David Maley, senior associate director of media relations, said the college is preparing other course options for students if a strike were to occur.

Grunberg said the intention of a strike would not be to hurt students, but to serve as a call to the college to change the way it does business with faculty members.

“The students are who we care most about here,” Grunberg said. “To have this kind of strike happen would hopefully pave the way forward for better conditions here for students moving forward, and to help the college understand that the way they’re prioritizing the tuition dollars they’re getting from these students needs to change.”