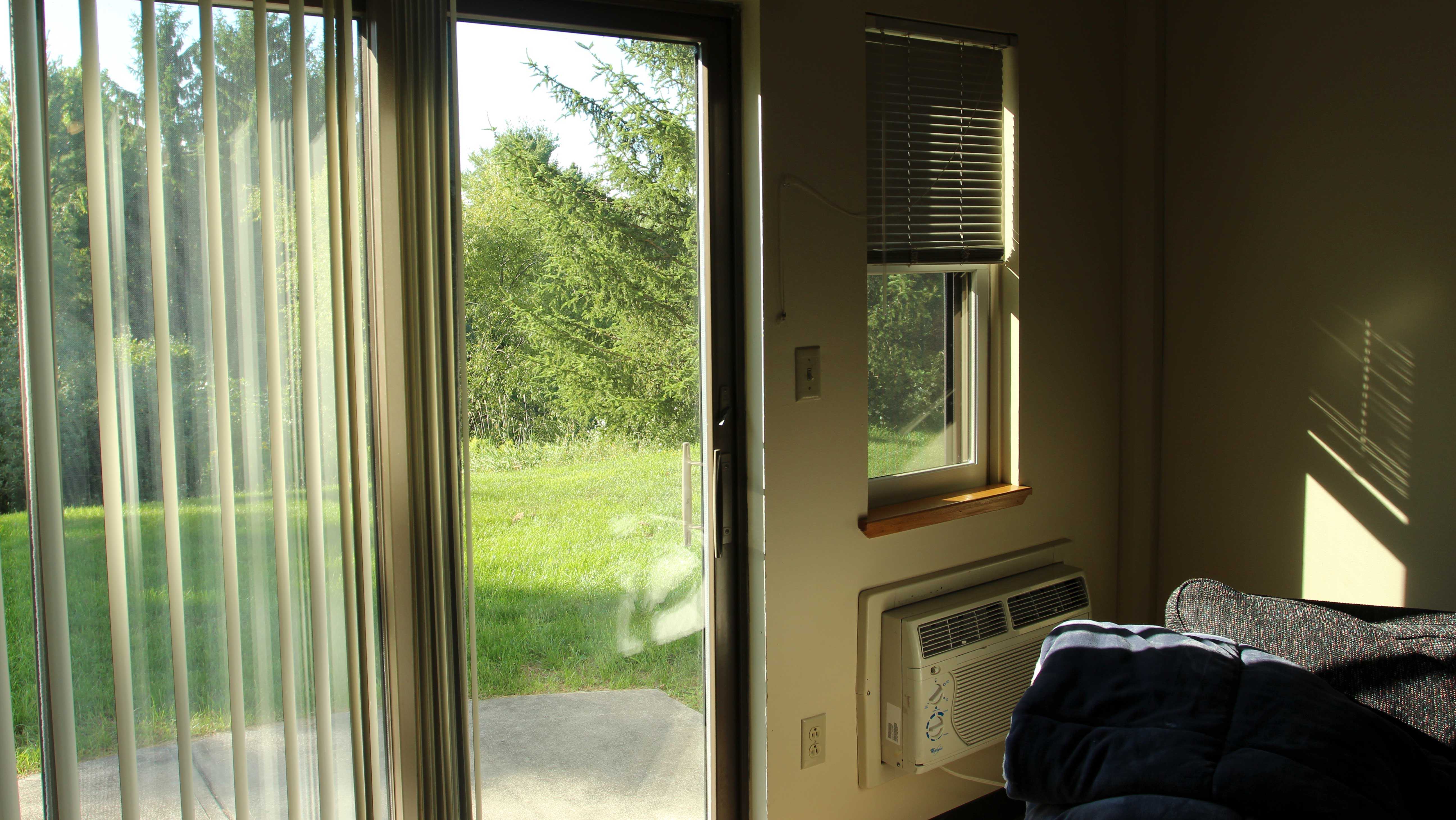 Grace Elletson/The Ithacan
Two Ithaca College Circle Apartments were broken into Aug. 16, the most recent contributions to a year with more crime in the Circles apartments than the previous year. Both of the apartments that were broken into Aug. 16 were accessed through unlocked sliding back doors such as the one pictured above.
By Grace Elletson — Assistant News Editor
Published: August 31, 2016

Junior Sean Gillen repeatedly woke up with an uneasy feeling in his Ithaca College Circles apartment the night that a stranger was outside his bedroom, stealing his television and speaker.

When Gillen’s apartment was burglarized Aug. 16, another break-in occurred at senior Andrew Meys’ apartment a few housing blocks away. These two incidents are the most recent contributions to a year with more crime in the Circles apartments than the previous year.

Thomas Dunn, lieutenant in the Office of Public Safety and Emergency Management, said he does not know why the frequency of these crimes is increasing specifically in the Circles apartments because the crimes have not yet been solved. However, he said this pattern of increased crime has happened in the past.

“I acknowledge that there’s an increase,” Dunn said. “But crime statistics can fluctuate. And the numbers that are fluctuations are consistent with our more historical data back further than two years.”

As a result of the growing number of break-ins, Public Safety has increased patrols in the area, Dunn said. He also said he wants to continue educating students about locking their doors. On Aug. 16, both of the apartments that were broken into were accessed through unlocked sliding back doors.

“We want people to lock their possessions, lock their cars, lock your doors to your houses, but we also want to make sure it’s clear that it’s the perpetrators fault,” Dunn said. “We’re not blaming the victim. A person should never enter another person’s dwelling.”

Meys had a friend sleeping over the night of the break-in. He said that around 3 a.m., the intruder came into the apartment through the unlocked back door with a flashlight when Meys’ friend, who was sleeping on the couch, woke up, causing the intruder to flee before he could identify him or her.

Meys said it’s easy to be forgetful about locking the doors of his apartment because he doesn’t think of his neighbors as people to fear.

“In this general area, it’s kind of easier to find doors that are unlocked because everyone is pretty comfortable here,” Meys said. “I think a lot of people just assume it’s a safe place because we have Public Safety and it’s technically on campus.”

Public Safety is also teaming with the Office of Residential Life to remind students to use wooden blocks in the tracks of the sliding back doors in the apartment buildings as an extra precaution. The blocks are available in the Circle Community Building, and Tim Carey, associate vice president of the Office of Facilities, said Residential Life requested more wooden blocks to be made for the semester ahead.

Another break-in occurred on July 26 when a burglar entered a Circle apartment while the tenants were sleeping and stole a bike, computer equipment and briefly used the tenant’s car. The residents found the vehicle in a different parking spot the next morning, Dunn said.

Dunn said the items that were stolen from that burglary were recovered by an outside law enforcement agency. He could not specify which one because the investigation is ongoing.

Juniors Brianna Goz, Katie O’Hara and Nicole Ferrara all live together in their Circles apartment. They said they feel Public Safety is doing what it can by patrolling the area, but they do feel nervous after hearing about the burglaries that have recently occurred. They agreed they can all be forgetful about locking their doors.

O’Hara said she heard that wooden blocks were available to reinforce the sliding back doors but that no one has contacted them about where to get them. Ferrara and Goz agreed they had not heard anything about the blocks.

“They were supposed to give us a wooden stick for our sliding door,” O’Hara said. “Our RA just said our RD would reach out to us, and he hasn’t.”

Gillen said that at first he was only worried that his property had been stolen, but later on, he realized that the burglary could have ended much worse.


“It was really messed up,” he said. “I was mostly focused on the stuff that morning, and I explained the situation to my dad, and he was like, ‘So they were right outside of your room. Good thing you’re safe right now.’ That didn’t even cross my mind.”