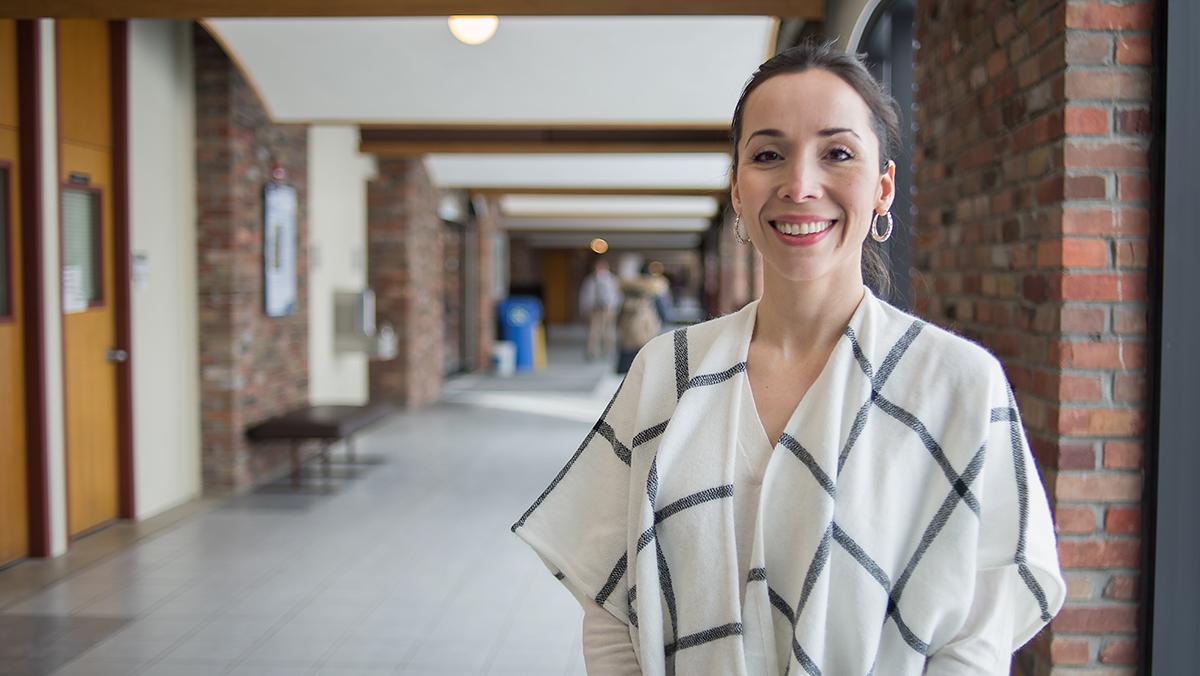 Fernando Ferraz/The Ithacan
Jessica Dunning-Lozano, assistant professor in the Department of Sociology, spoke about the studies she did when she was teaching in Texas, a state that requires public schools to provide Disciplinary Alternative Education Programs, and their impact on low-income communities and communities of color.
By Falyn Stempler — Staff Writer
Published: February 13, 2017

The Center for the Study of Culture, Race and Ethnicity continued its discussion series on dialogues about race with a presentation about the impact of Disciplinary Alternative Education Programs on low-income communities and communities of color.

Belisa Gonzalez, associate professor and director of the CSCRE, recruited Jessica Dunning-Lozano, assistant professor in the Department of Sociology, to discuss the investigative studies she did in Texas, a state that requires public school districts to provide DAEPs under the Texas Safe School Act of 1995. The DAEPs are alternative educational and self-discipline programs for students who violate a district’s Student Code of Conduct or commit other offenses, including felonies. Students are usually sent to the DAEP for a minimum of 20 days, Dunning-Lozano said. On Feb. 9 in the Klingenstein Lounge, she shared her study of the sociological aspects of the punitive policies of these programs, which affect low-income communities and communities of color. The discussion consisted of a presentation and a question-and-answer session.

Dunning-Lozano discussed her experience during the orientation period of initiation into the program where she worked and studied. She said she had to fill out behavior point sheets, witness on-duty police officers and teachers make racist remarks, and watch teachers scold and degrade students and parents alike for poor decision-making. She said DAEPs are not helping the youth who have broken rules and are disproportionately and detrimentally affecting low-income Latino and African-American boys.

Dunning-Lozano said it is easy to vilify teachers who have good intentions but enforce the punitive culture by scolding and demeaning students. She said this causes students to not do as well.

Transgender youth is another population segment that is popular in the DAEPs. Dunning-Lozano said she finds it upsetting that many transgender youth express joy to be in the DAEPs: It provides them with a sense of security that their former public schools cannot.

Dunning-Lozano also said students are not taught core curriculum subjects or to be creative in these programs. Success is defined by following the rules, not arguing, not pouting, not talking back and following the instructions instead of encouraging greater life aspirations.

“Success [in DAEPs] is to be quiet,” Dunning-Lozano said. “Be small.”

These behavioral notions belittle and degrade the students by implying they know nothing about school but everything about illegal activities, Dunning-Lozano said.

She said people must reconsider how to punish kids in schools.

“We need to consider some of the other insidious effects of such disciplinary practices that marginalize youth populations,” Dunning-Lozano said.

Some students at Ithaca College expressed concern over the practices of these institutions.

“There’s no creativity that is encouraged, and I just think that’s a shame,” junior Lauren Rapoport said. “I worry about these schools continuing.”

Junior Hycel Taylor, a sociology major and a student of Dunning-Lozano’s, said the topic of punitive programs for the youth is an important issue to him.

“I think it needs to be talked about,” Taylor said. “The Q&A portion brought up a lot of really important topics.”

Sophomore Shae Jewell, another former student of Dunning-Lozano and a sociology major, said Dunning-Lozano shed light on issues she had no idea about.

“She made me really aware of what’s going on,” Jewell said.

Dunning-Lozano said she hopes the findings she revealed make people uncomfortable and encourage them to rethink the disciplinary policies for youth.

“It is my hope that you leave here today feeling impacted by the experiences of the young people I got to know and work with,” Dunning-Lozano said. “If you feel disturbed about these findings in this case study, even compelled to do something about the disciplinary policies in school, then good. I’ve done something right here tonight.”