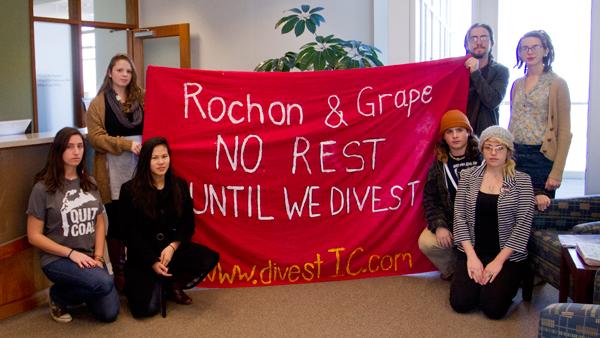 Seven members of Divest IC, the Environmental Leadership Action Network’s campaign, gathered Friday morning outside of the president’s office in the Peggy Ryan Williams Center to protest the college’s investments in fossil fuel companies. However, President Tom Rochon was out of town.

The protest was meant to convince Ithaca College administrators to divest from “socially and environmentally irresponsible companies.” ELAN is asking the college to divest from 16 fossil fuel companies, known as the” Sordid Sixteen” in the national movement for college divestment campaigns, by the end of 2013 and complete a written agreement that the college will end investments in these companies by 2015.

Carl Sgrecci, vice president of finance and administration, said the “Sordid Sixteen” companies comprise only “half of one percent” of the college’s endowment investments.  He also said the group’s goal to divest from these companies would be difficult to accomplish.

Students held a large red banner that said, “Rochon and Grape: No Rest Until We Divest” with the organization’s website address printed on the bottom.

The students had made an appointment with Diane Veroneau, the assistant to the president, hoping that she could show them in to see the president. However, Veroneau notified the students that Rochon was not on campus.

Junior Abby Togliatti was excited about the campaign and the action but disappointed by Rochon’s absence.

“The fact that the president is just brushing us aside just proves that the administration is not listening to the student body,” Togliatti said. “I think us going there shows that we need to keep showing that we are capable of being organized and making change.”

Freshman Menli McCreight was one of the representatives hoping to speak directly to Rochon.

“My major is environmental studies, so I really want to make the planet and school more green.” McCreight said. “I believe in what we’re doing.”

Sgrecci said the college cannot ask the mutual fund holders to sell the shares of those companies.

“The fund manager has other clients and investors in their funds, so Ithaca College doesn’t have the authority to tell that company that they need to sell that particular stock,” Sgrecci said.

After the action senior Ren Ostry, president of ELAN, said that she believed that the action was a success.

“This was so incredibly smooth, organized and needed,” Ostry said. “It couldn’t have been a better tactic for where we’re moving. I was so impressed by everyone.”

Sgrecci said the college it is possible that the college would offer a sustainable investment option for interested donors in the future.

“I think that The college is going to be exploring the concept of a sustainable portfolio,” Sgrecci said. “Depending what we find of a sustainable portfolio, we’ll be able to offer donors a choice of whether they would like to invest in the regular endowment pool or the sustainable endowment pool. I’m not guaranteeing anything, but I think what the college will be doing over the next period of time is looking at offering options.”