Documentary produced by students and faculty nominated for Emmy 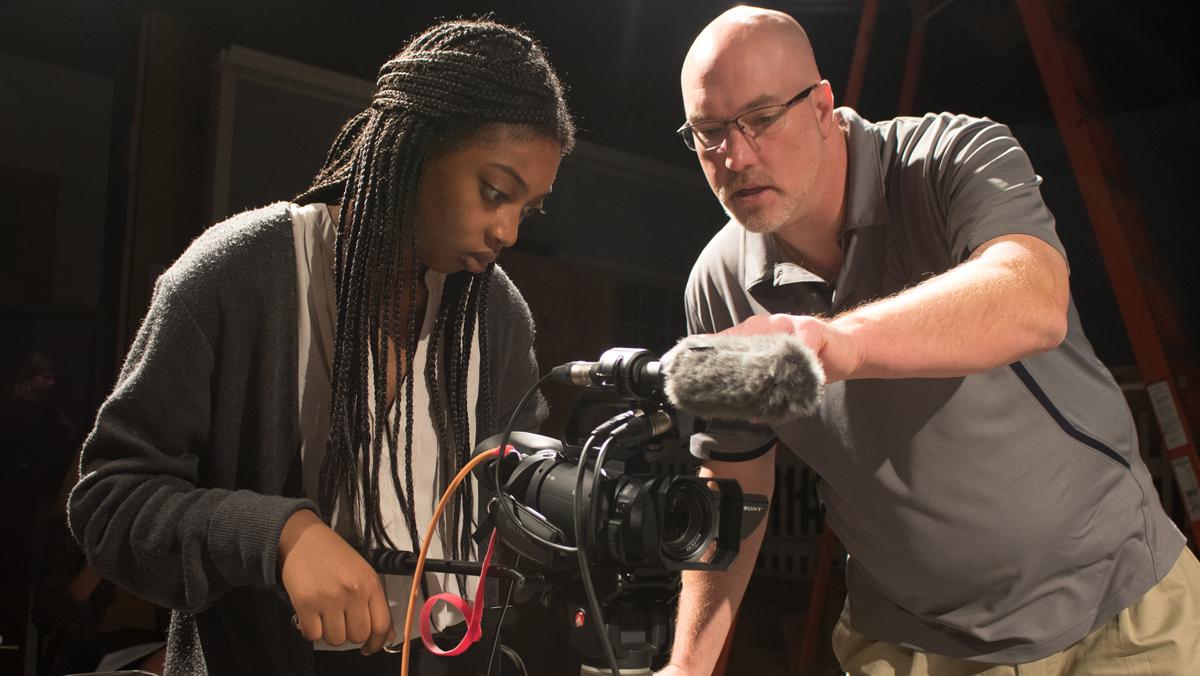 Courtesy of James Rada
From left, Kalia Kornegay ’18 and James Rada, associate professor and chair of the Department of Journalism, work while producing the documentary “With INFINITE HOPE: MLK and The Civil Rights Movement.”
By Cora Payne — Assistant News Editor
Published: February 12, 2020

James Rada, associate professor and chair of the Department of Journalism, knew he had to jump at the chance when he and students from the Roy H. Park School of Communications were offered the opportunity to produce a documentary for Memphis Public Broadcasting Service affiliate WKNO in Spring 2017 about the legacy of Martin Luther King Jr.

“[WKNO] said they didn’t have anything planned but would love if someone filmed a documentary,” Rada said. “I thought, we’re ready, able and willing to do this — let’s do it.”

The final product, a documentary titled “With INFINITE HOPE: MLK and The Civil Rights Movement,” was recently nominated in the Documentary/Historical category of the Midsouth Regional Emmy Awards. The 34th Annual Midsouth Emmy Awards will take place at 9 p.m. Feb. 15 and will be streamed online.

To date, the documentary has aired more than 460 times on 250 public television stations across the country. The film is also available on its website to be viewed in completion for free.

Rada gathered a team of faculty and students in the Park School to travel around the South interviewing seven historians and 16 prominent civil rights activists who participated in various events of the movement, including the Montgomery Bus Boycott, the Birmingham Children’s March and the Freedom Rides. Throughout 2017, the team filmed interviews in Alabama and Tennessee. The project took approximately a year to produce.

Kornegay, who was a journalism student, conducted interviews for the documentary. She said interviewing primary sources from the civil rights era helped bridge the gap between the past and the present.

“Sitting and listening to these people speak, it was so inspiring,” Kornegay said. “It helped me really see that this wasn’t just something that happened long ago, it is so much closer than we think or realize.”

Tulp, who was a journalism student, said that although King is often remembered for his civil rights advocacy, the documentary also touches on a lot of his other activist causes.

“It is so important to note what a lot of these sources were sharing with us, which is that [King] was a very nuanced man,” Tulp said. “A lot of these sources pointed out that he was incredibly adamant about economic justice, capitalism not being the best system. It wasn’t just about ‘I have a dream.’ There was a lot of economic policy and anti-war policy attached to his legacy as well.”

In a speech called “Beyond Vietnam,” King denounced the Vietnam War and advocated for international peace. King also denounced capitalism throughout his life, writing that “capitalism has seen its best days.”

Rada said that he believes the stories around the civil rights movement are some of the most important stories to tell.

“To me, the civil rights movement … is the true American revolution because this is what democracy looks like,” Rada said.

Rada said students were carefully selected to work on the project based on several factors. Rada reached out to faculty in the Park School for recommendations, and then he reached out to individuals that seemed to be a good fit.

“I look for students who have the journalistic aptitude but also the proper professional and cultural attitude,” Rada said.

Kornegay said every student that worked on the project brought something different to the table.

“I knew a lot about interviewing but not much about video or editing, so it was great to use what I knew and also learn new things,” Kornegay said.

“What I do now is I look at these states — so many of them are shaped by the legacy of what happened during the civil rights movement — and I carry so much context with me from learning about what happened and what has happened since,” Tulp said.

Tulp, originally from Kansas City, Kansas, currently resides in Atlanta and is currently a news associate for The Associated Press, she said.

Tulp said she is grateful to have the opportunity to share these stories.

“The honor of being nominated is really cool,” Tulp said. “Being able to put a line on your resume is really cool, but the coolest thing is the story here. It just goes to show that there is such a powerful story we got to tell, and greatest recognition goes not to production but to the story itself and the people who shared such beautiful, vibrant memories with us.”