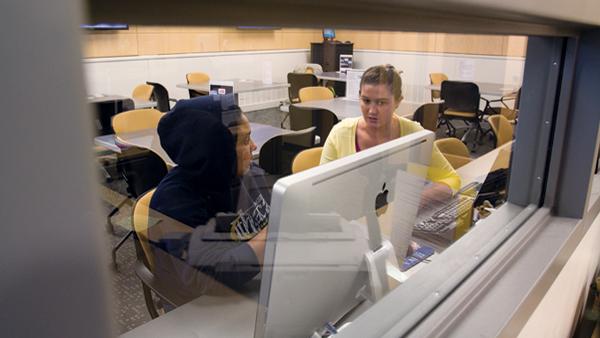 As December approaches, nearly 300 Ithaca College students are gearing up for graduation and a job market where mixed fortunes await them.

Though the economy isn’t thriving, employment prospects are dependent on the individual. Kristin LiBritz, assistant director of alumni and employer relations at Career Services, said job success after graduation depends largely on one’s preparation while in college.

“Whether you graduate in December or May, a lot of your success is going to come down to what you’ve done to prepare for your job search,” she said.

LiBritz said networking, internships, jobs and involvement on or off campus determine success when searching for jobs.

Senior Rhiannon Youngbauer, a television-radio major who is graduating in December, said she is ready to stop being a student and use what she has learned over the years. However, she also said the news industry is a difficult one when it comes to finding a job.

“I have sent out 85 applications to news stations all over the country,” she said. “And I have not had a lot of luck. I have gotten a lot of rejections. I have had even more people not contact me at all. I do have a pending interview that may or may not happen.”

Employment for reporters, correspondents and broadcast news analysts is expected to decline by 6 percent between 2010 and 2020, according to the national Bureau of Labor Statistics. However, employment for other occupations in the field of media and communications, such as editors and photographers, is predicted to grow.

Because of student loans, some graduates, like Sam Lupowitz ’11, who graduated from the college last December, find temporary employment to help them pay the bills. Lupowitz hopes to someday have a career as a musician and is currently a bank teller at First Niagara bank in Ithaca, a job he said is temporary. Lupowitz said his accumulated student debt is one of the reasons he could not take up music immediately after graduation.

“I did better than a lot of people, but I am going to be paying those off for about 10 years,” he said. “That’s another reason I couldn’t just say, ‘I am going to go be a musician and drop everything.’”

Seventy percent of Ithaca College undergraduates— 4,496 students — fund their college expenses with the help of federal loans, totalling more than $30 million, according to 2010 data from the National Center for Education Statistics.

Employment for music directors, composers, musicians and singers is expected to increase by 10 percent in the next 10 years. The music performance education is a four-and-a-half year program, which causes all students enrolled in the program to graduate in December.

The number of teaching positions available for high school, kindergarten and elementary teachers is expected to see an increase of 7 percent. Meanwhile, health-related fields like physical therapy and occupational therapy will see an employment increase of 39 percent and 33 percent respectively, while accountants will see an employment increase of 16 percent, according to the 2010-20 Occupational Outlook Handbook, published by the Bureau of Labor Statistics in the spring of 2012.

Meanwhile, Youngbauer said, while graduating in December may mean less competition for her, she worries that hiring calendars may pose a problem.

“I have had a couple of friends tell me that with budgeting, the next couple of months are a little harder to hire people for a lot of stations and a lot of industries in general,” she said.

However, LiBritz said this depends on the field of employment. She said certain industries, such as finance industries and accounting firms, tend to recruit early in the fall semester. Similarly, she said advertising marketing and public relations industries tend to recruit in April and May. Organizations such as City Year, Teach for America, Americorps and the Peace Corps recruit throughout the course of the year, LiBritz said.

For senior Daniel Schuster, an exercise science major, graduating next month may not be a daunting prospect. Schuster is currently waiting to hear back about a paid internship, after the organization reached out to him and asked to see his resume.

He also said that while this internship was not his first choice, it would help him save up for graduate school.

“I’d be able to live at home, save some money before going off to graduate school,” he said. “Again, it’s not the ideal position I’d want for a career, but it’s a step in the right direction.”

Schuster and other early Ithaca College graduates are joining 4.7 percent of America’s undergraduate population in graduating early, according to the National Center for Education Statistics.

Meanwhile, Senior Alyssa Walker, a television-radio major, has yet to hear back from employers about her job applications. She said it is discouraging sometimes that being a recent college graduate does not appeal to employers in her industry. However, she says there is hope.

“I have internships,” she said. “I have other work experience, and I am hoping that they will see that and see that that makes a difference.