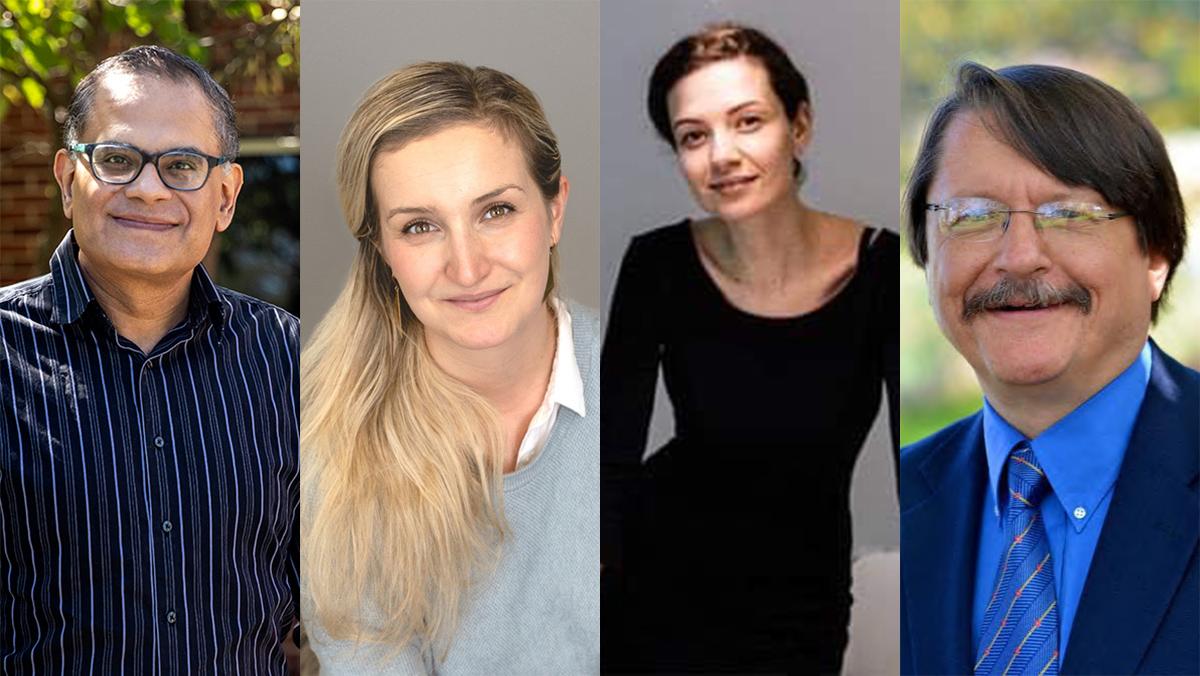 Masha Shpolberg - courtesy of Melanie Shepard, Natalie Gryvnyak - courtesy of Niels Ackermann, Raza Rumi - Kalysta Donaghy-Robinson/The Ithacan, Zenon Wasyliw - courtesy of Matt Prokosch/The Ithacan
The round table was moderated by (left) Raza Rumi, director of the PCIM. The guest speakers from left were Masha Shpolberg, assistant professor of Film and Electronic Arts at Bard College; and Natalie Gryvnyak, a journalist and founder of the information and production agency, In-features; and Zenon Wasyliw, professor at the Department of History at Ithaca College.
By Prakriti Panwar — Contributing Writer
Published: September 12, 2022

Media experts discussed the challenges of covering the Russia-Ukraine war in independent and mainstream media in a round table discussion held via Zoom Sept. 7 at Ithaca College.

The event was co-sponsored by the Park Center for Independent Media (PCIM) and the Finger Lakes Environmental Film Festival (FLEFF), both of which have been partners in producing independent media for a long time. Around 100 people — which included students, faculty, journalists and global citizens from across the world — attended the event.

The guest speakers were Natalie Gryvnyak, a journalist and founder of the information and production agency, In-features; Masha Shpolberg, assistant professor of Film and Electronic Arts at Bard College; and Zenon Wasyliw, professor at the Department of History at Ithaca College. All speakers’ roots traced back to Ukraine. The round table was moderated by Raza Rumi, director of the PCIM.

Rumi began the discussion by describing the magnitude of the violence and how the Russia-Ukraine war affected citizens. According to NPR, over 13 million Ukranians have been displaced, 9,000 military personnel from Ukraine have lost their lives and 20% of Ukrainian land has been occupied by Russia.

“One must … uphold fairness and accuracy while covering war, and above all, show the magnitude of suffering caused by such conflicts,” Rumi said.

The Russia-Ukraine conflict began with Russia launching an invasion of Ukraine Feb. 24. However, the history of the conflict traces back to 2014 when Russia invaded Ukraine for the first time and annexed Crimea from Ukraine.

“You can see, you know, the conditions of work of a military journalist, and many civil journalists have unfortunately become military reporters,” Gryvnyak said. “So unfortunately, we’ve learned new skills.”

Shpolberg talked about the role of audio-visual media in the war. She said media collectives like Babylon ‘13, Freefilmers and War Against War (WAW) Ukraine play an important role in covering the Russia-Ukraine war. Independent media in Ukraine is mainly distributed through platforms such as YouTube, Instagram and Telegram. Shpolberg said Telegram — a messaging platform — is the most popular because it consists of features like encrypted chats, public and private channels, “secret chat” and other features that protect the privacy of users better than other well known messenger apps like WhatsApp.

“If we think about ‘news’ as wanting to inform, I’m looking at audio visual media, which seeks to document reality and seeks to preserve it for the future,” Shpolberg said.

Brendon Bennett ’04, a major in the U.S. Army and a former student of Wasyliw, brought up the issue of the U.S. military’s involvement in the conflict during a conversation about decreasing media coverage by the West.

Mark Engstrom ’77 said he wanted to understand the perspective of Russian citizens and the information and media that they had access to regarding the war against Ukraine.

“We don’t get to hear about the efforts of everyday people [affected by the war] and don’t recognize the fact that the people have a lot more agency than sometimes we want to give them,” Shpolberg said in context of the Western perspective of wars in other countries.

The guest speakers reminded the audience that the war is still ongoing despite the fluctuating levels of media coverage.

“Unfortunately the attention to the war is dropping,” Gryvnyak said. “I want to remind you all that the war did not start on the 24 of February this year. The war started eight years ago.”