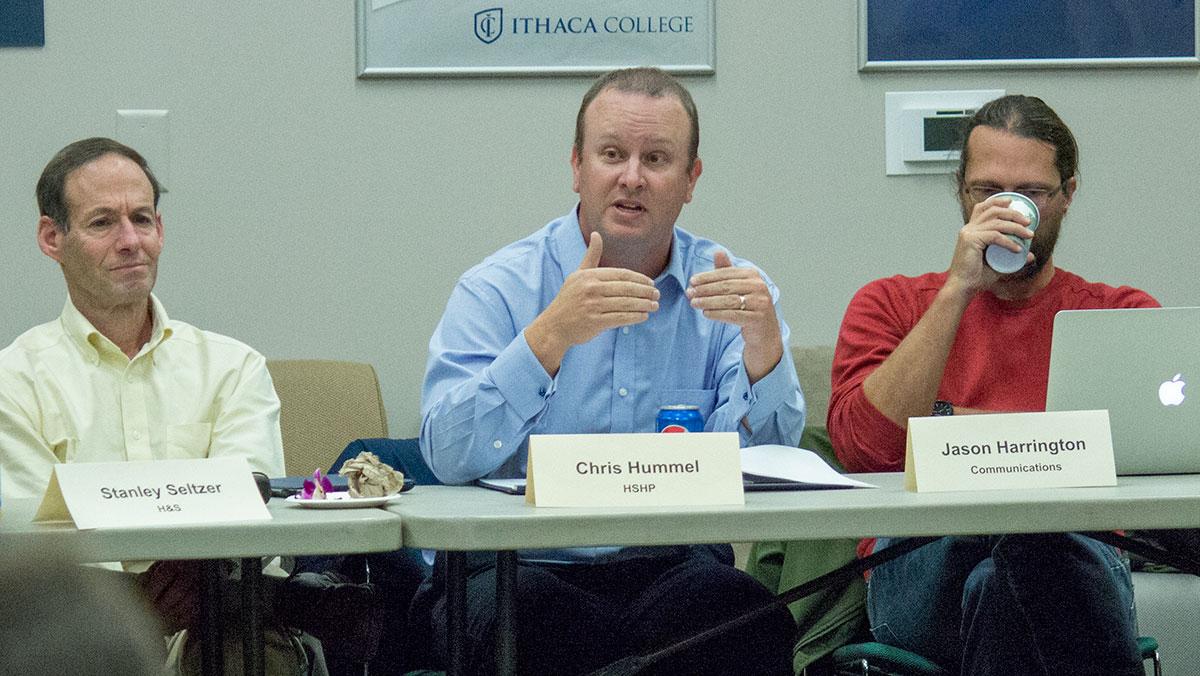 Ithaca College Faculty Council discussed conflicts between classes and sports in the 4–6 p.m. time slot and heard a presentation on the college’s budget from Gerald Hector, vice president of the Division of Finance and Administration, at the Oct. 6 Faculty Council meeting.

Judith Pena-Shaff, chair of the Academic Policies Committee, brought forth a proposal to Faculty Council that no single-section required course can be scheduled in the 4–6 p.m. time period in order accommodate intercollegiate sports practice times.

Pena-Shaff said the proposal gives students the ability to stay committed to a sport while also being able to complete the requirements of their major.

“The rationale is basically a practice but not supported by policy,” Pena-Shaff said. She said while most professors are mindful of that time frame being dedicated to sports, not all faculty members schedule around the conflict.

Faculty members were concerned about the lack of statistical information about the number of students and classes the proposal would impact, as well as how it would affect particular programs at the college.

Fae Dremock, assistant professor in the Department of Environmental Studies and Sciences, said the science department wouldn’t be able to comply to the policy because science labs are generally booked during the afternoon.

“It would be too hard for the department to maintain that space open,” Dremock said.

Michael Trotti, professor and chair of the history department, said seminars are often held in that time frame from his school.

Chris Hummel, clinical associate professor for the Department of Exercise and Sport Sciences, said the absence of a policy designating an official time for athletes to practice is confusing for students.

“Having policies listed out for student-athletes for them to know is important,” Hummel said.

Hummel, who is also an athletic trainer for the college, said a struggle of being an athlete is making the choice between the commitment of the sport and their academics and that this policy would help them balance both commitments.

The council passed a motion to ask the Office of the Registrar to research how many student-athletes and students who are not athletes would be affected by the policy and how many classes are currently being taught in the 4–6 p.m. time frame. The council agreed to revisit the issue once these statistics are received.

Hector also addressed the council about the details of the college’s budget. Hector said the motivation behind the discussion was to present information on the college’s expenses and a plan detailing how to move forward.

Hector said he primarily wanted to clarify how the college’s budget worked so when faculty members come to him with questions, they can be asked in the correct context. He explained that while the college’s tuition is rising at a rate of less than 1 percent per year, the college is also increasing in how much aid it gives out to students, which means it is bringing in less revenue over time. Hector described this overlap as a potential problem and outlined how the budget needs to tighten its surplus money, known as the Capital Maintenance Fund, in order for the college to maintain a healthy economic position.

“We need to educate [faculty and staff] to make sure this institution remains financially solid,” Hector said.

The council also decided not to address budget priorities for the 2016–17 academic year. Peter Rothbart, chair of Faculty Council, said the discussion will most likely be moved to the spring.