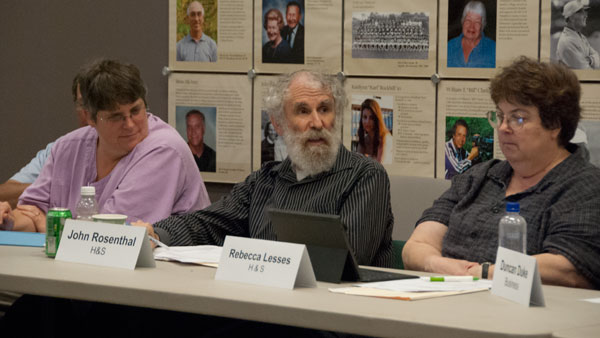 The Ithaca College Faculty Council began the year brainstorming revisions to the First-Year Reading Initiative, unanimously endorsing President Tom Rochon’s “Under 3 Over 3” budget plan and preparing to meet the three new members of the Board of Trustees.

The FYRI was the main topic of discussion and critique at their meeting Tuesday. The council took initial steps in developing six new kickoff events for the incoming Class of 2018. The events would tie in summer reading books with the six Integrative Core Curriculum themes. The changes are designed to attract more students to the book discussion and make the experience more welcoming to new students.

Chris McNamara, clinical assistant professor and clinical director of the Department of Physical Therapy, said only about half of the students in a given class attend the FYRI kickoff discussion group, and even many of the students who attend don’t read the book enough to participate effectively.

“For me, the bottom line is that the First-Year Reading Initiative, as it is structured now, is not working,” McNamara said.

Bonnie Prunty, director of residential life and judicial affairs and assistant dean of first-year experiences, said feedback from students and faculty about the FYRI discussion groups was consistently negative throughout the years.

“Clearly, part of what we heard from the students … who read the whole book and went excited about the experience, was about their level of frustration with their fellow students who either don’t show up at all or show up and are unprepared,” Prunty said.

The council voted on approving the changes to FYRI, with 13 council members voting in favor, five voting against and nine abstaining. Changes to the FYRI are still tentative, but Kelly said the deadline for a decision is in October, because the college needs time to buy books, plan events and advertise the initiative.

Before the council voted on the FYRI at the meeting, Marisa Kelly, provost and vice president of academic affairs, said the budget plan is already in effect, but having the faculty support Rochon is a sign of solidarity throughout the college.

“By endorsing something like this, it helps make us sound responsible, and it helps [achieve] perhaps other things that we are pushing for,” Rosenthal said.

The college has also organized a retreat for faculty and the new members of the Board of Trustees — Michael Buck, clinical assistant professor; Christina Mattin; and Douglas Weisman — to interact and discuss the role administration and faculty will have in the ICC, which is a part of the IC 20/20 strategic plan.

Kelly said trustees will visit classes throughout the year to observe the implementation of the new curriculum and its effect on students.

“Essentially, what we did was to try to pick a set of courses … where we could cover a broad range of disciplines and teaching styles,” she said.

The council then discussed how a revised FYRI could complement the FYRE and the ICC.

James Pfrehm, assistant professor in the Department of Modern Languages and Literatures, said more events would allow for more diverse book selection, which would hopefully attract more students by being more relevant to their themes.

“Quite often, [those who selected the FYRI book] were the same people year after year,” Pfrehm said. “If you have six committees, you have a variety, and perhaps you can see how different committee make-ups have an impact on whether or not the freshmen read the books.”

Rosenthal said the events did not necessarily have to be at the beginning of the year, and that waiting until the middle or end of the semester could allow students to gain more appreciation for their theme.

Several faculty members were opposed to replacing the single book with multiple books, because separating students into six groups would prevent them from sharing a common experience.

Mark Andrew Hall, assistant professor in the Department of Modern Languages and Literatures, said framing the events around multiple books would contradict the purpose of the FYRI, which is to provide all students with a common experience.

“I would echo the sadness of the loss of … a common experience, especially in the context of this new ICC, which is supposed to be about reaching across boundaries,” Hall said.

Not all faculty agreed that basing events around themes would accurately increase student interest. Some members of the council said students did not have as much interest in or attachment to their theme as administration had anticipated.

Deborah Rifkin, associate professor in the Department of Music Theory, History and Composition, said students may not identify with their theme as much as faculty assumed, and that this might hinder the new FYRI’s success.

“Students aren’t identifying with a theme when they come on campus,” Rifkin said. “In fact, many students chose what fit in their schedules, and not even because they liked the course.”

Kelly said, however, that adding six separate books, each with their own event, would support the implementation of the ICC by being able to appeal to individual students’ interests more specifically.

“The FYRE is a very tangible way that we restructured that program to try to give life to the themes outside of individual classes,” Kelly said. “[The FYRI] is another potential piece of that if we make the switch.”