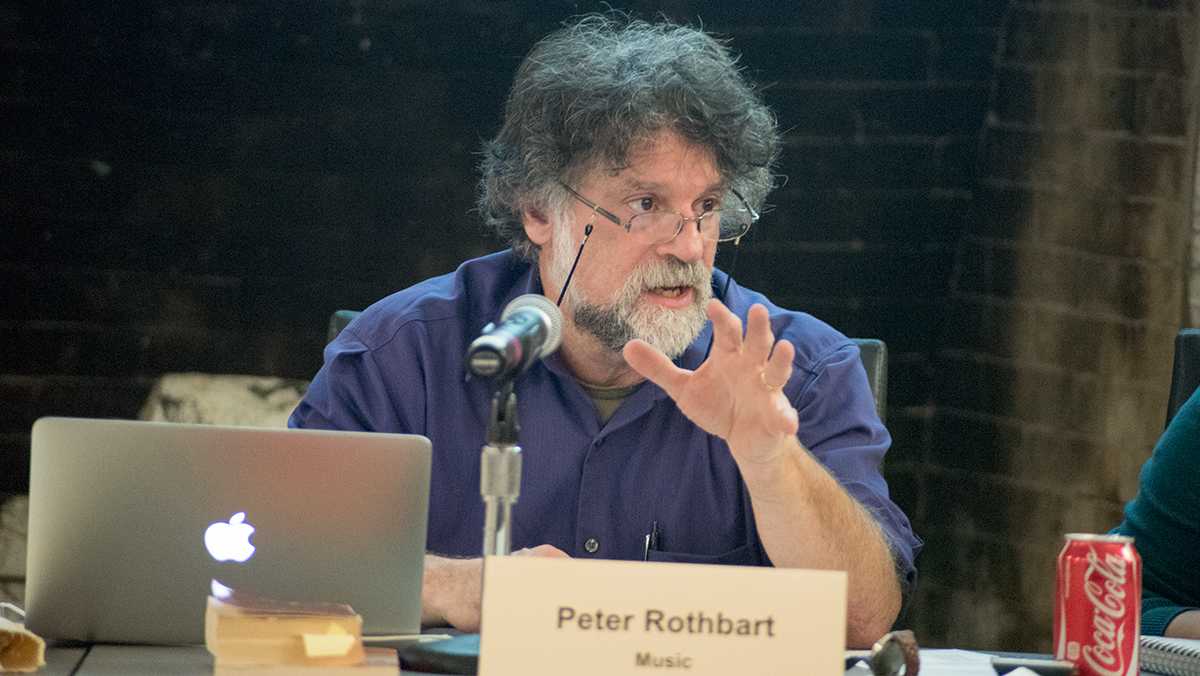 Amanda den Hartog/The Ithacan
Peter Rothbart, chair of Faculty Council, speaks at the Nov. 10 Faculty Council meeting. Rothbart has received criticism for Faculty Council's decision to release the results of the faculty vote of "no confidence" to President Tom Rochon and the Board of Trustees before the rest of the campus community.
By Grace Elletson — Staff Writer
Published: December 14, 2015

Faculty Council is being criticized by faculty members for releasing the results of the faculty no confidence vote to Ithaca College President Tom Rochon and the Ithaca College Board of Trustees before the rest of the college community.

In the initial motion made by the council at the Nov. 10 meeting, it stated: “Voting will be anonymous. The tally (including number of eligible voters) will be reported to the following parties by Monday, December 14: the President of the College, the Chairman of the Board of Trustees, Faculty Council and all faculty.”

But it was decided in the Nov. 11 executive session of the Faculty Council meeting that the results would be released to the president and board of trustees before the rest of the college community, Peter Rothbart, chair of Faculty Council, said. Executive session is called when Faculty Council wants to convene in a private setting, giving it the right to exclude all decisions that are made in that session from the meeting minutes and the public.

Rothbart said when the decision was made to send the results early, “more than a quorum” of Faculty Council members was present to vote on the decision.

This information was not made public, and Rothbart declined to explain why the decision was made to release the results early, due to the rules of executive session. An anonymous faculty member said a member of Faculty Council had mentioned in casual conversation to other faculty members that the vote results were going to be released to Rochon and Grape first, and this information then proceeded to spread and spark discussion through the faculty’s email listserv. Rothbart, professor in the Department of Music Theory, History and Composition, said he is not sure if the council will reconvene to discuss addressing the college community’s concerns.

Nick Kowalczyk, associate professor in the Department of Writing, is one of the faculty members who criticized the council’s decision. He said he felt the decision to not release the results all at the same time was a discourtesy toward faculty.

“I don’t understand the logic of that decision,” Kowalczyk said. “I think that Faculty Council … is supposed to represent the will and interest of the faculty. So it is the faculty who should come first in their minds, not the administration.”

“My issue with it is with the lack of transparency and the preference to give courtesy to the board of trustees and the president, rather than to faculty who called for the vote in the beginning,” Rodriguez said.

She said maybe the decision to issue the results early was not thought through enough, and she was disappointed faculty were just learning about this detail one day before the results were announced.

“Can we really count on the fact that Faculty Council is hearing our voices rather than hearing concerns about giving courtesy to someone we have no confidence in?” Rodriguez said.

Jason Harrington, council member and associate professor in the Department of Media Arts, Sciences and Studies, said although he is not at liberty to explain why the decision was made, he thinks the council needs to come together and address the concerns.

“I think what needs to happen now is … Faculty Council needs to agree on this discussion that took place in executive session and answer that question as a body,” Harrington said.

Rothbart said he’s disappointed by the feedback he’s received about the decision and that personal attacks on his integrity he has received via email need to stop because all decisions that were made were not by him singularly, but by the council as a whole.

“The rhetoric needs to calm down on this campus, and the personally offensive and threatening behavior needs to stop,” Rothbart said.