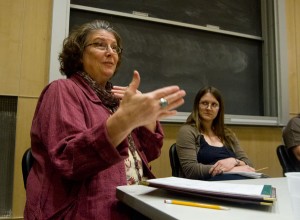 Full-time faculty and the Labor Initiative in Promoting Solidarity are taking a stand for part-time faculty who will not receive a raise for the second year in a row following the approval of the 2012-13 budget by the board of trustees.

Full-time faculty members Zillah Eisenstein, professor of politics, and
Michael Smith, associate professor of history, sent a letter and a petition signed by 67 other full-time faculty in February to the board of trustees, Rochon, Provost Marisa Kelly and the deans from every school at the college raising the issue that it is a matter of “grave unfairness” to not extend the raise to all faculty, including part-time faculty.

Rochon and Carl Sgrecci, vice president of finance and administration, declined to comment before the board of trustees’ official response.

LIPS held a panel Tuesday in which part-time professors, full-time faculty and students discussed part-time faculty issues including the hours they log in, the respect they receive as professionals on campus, the lack of job security as adjuncts and the lack of health care benefits.

Senior Chris Zivalich, a member of LIPS, said the group is demanding equal pay and equal benefits for part-time faculty by reallocating funds without increasing tuition.

Whisman, who has been an adjunct faculty member at the college for more than 10 years, said though she struggles without pay during summer break and in January after winter break, she has chosen to stay at the college because of the atmosphere and the roots she has set in Ithaca. Whisman and the other panelists and part-time faculty who attended also said they feel they are not getting paid enough for the amount of work and hours they log.

“One of the things that I don’t like about being an adjunct is that either you volunteer a lot of labor — you go to committee meetings and you do service and that kind of thing — but you get absolutely no pay for it,” she said.

Part-time faculty without an “ongoing position,” which means faculty whose contract is for one semester or one year only, as opposed to on-going contracts that span multiple years, do not receive health care benefits and are paid $1,300 per credit for each course, which is lower than full-time assistant professors, who are paid an average salary of $59,700, according to the 2012 Faculty Salary Survey Conducted by the Chronicle of Higher Education. This means they are paid an average of $2,843 per credit hour and are eligible for benefits.

According to the college policy manual, the instructional load for part-time faculty should not exceed 50 percent of the maximum teaching load per semester. Adjuncts are not required to attend faculty meetings or be faculty advisers to students. However, some adjuncts feel this excludes them from department issues, so they still attend the meetings.

Following a review of best practices in various institutions, the Modern Language Association recommended a minimum compensation for 2011-12 professors of $6,800 for a standard three-credit-hour semester course or $2,266 per credit hour.

Stepp Breen said while full-time positions are offered every year, adjunct professors who already work at the college do not receive the same consideration as outsiders who apply for these jobs.

“You are so consumed with teaching that occupies all of your time that you are not able to do the sort of publishing and researching that would enable you to stop being a part-time adjunct, so it is sort of a vicious cycle,” Stepp Breen said.

The National Education Association reports there has been a steady growth in part-time faculty hired at private colleges. In 1987, 32 percent of total faculty in the nation were adjuncts, and in 2003 the number grew to 42 percent. The Chronicle of Higher Education reports the number was 64 percent in 2009.

“The percentage of [part-time] people within the academic teaching workforce has gone from about less than a third of the workforce to being almost three fourths of the work force in just a generation,” Smith said.

The college has been able to maintain a low number of part-time faculty. Almost 30 percent of faculty at the college works part-time.

Though some experts argue the reason for this increase is a result of the recent recession that struck the country and national colleges’ search for cheaper labor, Mark Coldren, vice president of human resources, said this view is a bit generalized.

“To say this is an across-the-board consistency — ‘Let’s hire adjuncts because it’s cheaper,’ — I think is an oversimplification, and I don’t think it’s true,” he said. “Here is a decision made institution to institution about what is the makeup that makes sense. ”

Contract appointments are being signed in the next few weeks and it is still unclear if the panel and the petition will lead the board of trustees to reconsider next year’s pay.

Senior Alyssa Figueroa, a member of LIPS, said she hopes the faculty and student actions will bring the issue to the forefront of discussion at the college.

“I want it to be a catalyst for more discussion and hopefully action to demand that Ithaca College enhance the working conditions for part-time faculty,” she said.