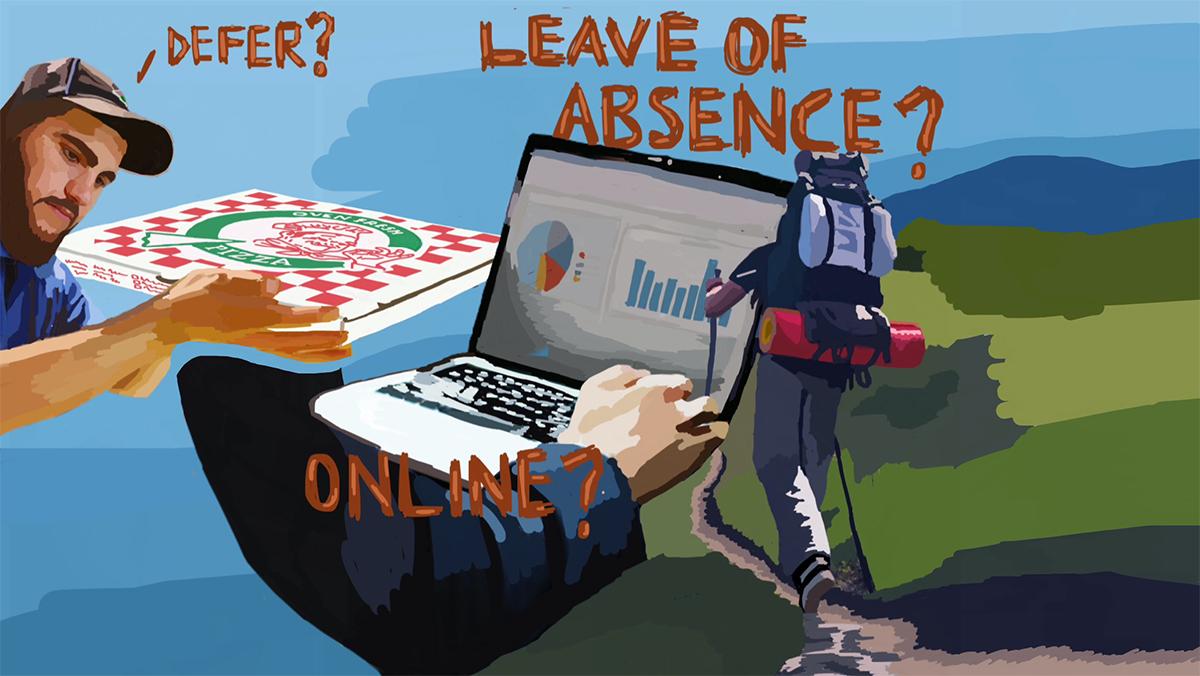 On June 1 — the final day to put down a tuition deposit for Fall 2020 — admitted student Inbaayini Anbarasan was faced with a decision: to take the trip to the United States amid the COVID-19 pandemic in order to take classes at Ithaca College or stay at home in India?

“It was so scary and uncertain that I just kind of panicked and I just deferred,” she said.

Hundreds of admitted and returning students have decided not to attend the college for Fall 2020. Some of these decisions were made because of the COVID-19 pandemic prior to the college’s announcement about teaching classes remotely for Fall 2020. Others were related to student concerns about paying full tuition for online instruction.

At the Faculty Council meeting on Sept. 1, President Shirley M. Collado announced that the college will need to rework its size to fit with lower enrollment numbers for Fall 2020, a move that is in line with the college’s five-year strategic plan, Ithaca Forever. At the All-College Gathering on Sept. 22, Collado repeated this intention to recalibrate the size of the college over the next year. 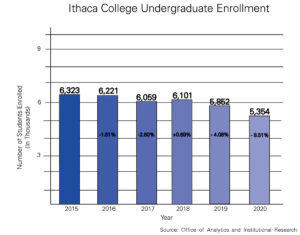 Laurie Koehler, vice president for marketing and enrollment strategy, announced June 18 — before the college announced its decision to hold classes remotely for the fall — that 1,155 freshmen and transfer students had put down tuition deposits for enrollment at the college. In the announcement, she said that she expected enrollment to decrease to less than 1,100 students after melt, which is when students put down tuition deposits for enrollment but then do not actually enroll.

“We will end up with a much smaller first-year class than last year,” Koehler said in a June 26 interview. “That has implications for the institution long term. It has implications around course demand. It has financial implications because we are so dependent on — as are many schools — tuition revenue to operate.”

The college’s operating budget relies heavily on student fees, which include tuition and room and board. The college increased its tuition to $46,611 for the 2020–21 academic year, a 2.95% increase from the previous year. This semester, most students are not living on campus, so they are only paying tuition.

Mikyung Ryu, director of research publications at the center, said that she believes the decrease in enrollment can be attributed to the COVID-19 pandemic and students not wanting to return to campus or take classes online. She also said the high price of private colleges might turn people away during times of financial crises.

“Most people prefer more cost–effective options for their education,” she said.

Admitted student Devon Jezek was planning to start her freshman year this fall, but she decided to take a gap year after the college announced it would not allow students from states on New York state’s travel advisory list on campus. Jezek is from Texas and said that she knew she would not be allowed on campus at all during the fall semester. As of Oct. 1, Texas is still on the travel advisory list.

Instead of taking classes online, Jezek is traveling the United States. Currently, she is working at Custer State Park in South Dakota and is planning to volunteer and find work where she can.

“I wouldn’t mind volunteering with the wildfires in California or the hurricanes down in Louisiana,” she said. “Just anything that can help people, especially with COVID-19, I would love to do that.”

Jezek said that even though she could have taken classes online, she wanted to be able to have hands-on experiences and interactions with other students.

“I was worried about creating connections with other people online,” she said. “I want to be able to have face-to-face conversations in person.”

SimpsonScarborough, an organization that conducts research about higher education, held a national student survey about the COVID-19 pandemic and college. The most recent part of the survey was conducted in July and surveyed 927 incoming freshmen and 905 returning college students. The survey found that 40% of incoming freshmen were likely to highly likely to change their minds about the school they chose to attend because of the pandemic.

Anbarasan said that she was able to join a couple of clubs and interact with other freshmen through a discord server. However, she said that she still feels isolated being in India rather than the U.S. where many of her peers are.

“The time zones are really complicated,” Anbarasan said. “Everything happens in the middle of the night, so my sleep schedule has completely changed.”

She said that, at times, she regrets her decision to defer her enrollment to the spring. She said she has seen other freshmen socialize while she cannot. However, she said that knowing everyone else has to mostly interact online helps her feel better.

“Sometimes I can’t help but feel left out,” Anbarasan said. “Sometimes I’m like, ‘I wish I could be there.’”

Senior Katherine Dotten also decided to take a gap semester. Dotten said that she began to consider taking a gap semester during spring break when the college announced that the break would be extended by a week followed by two weeks of remote classes. The college later decided to hold the rest of the spring semester online.

Dotten, a film, photography and visual arts major, said she was going to graduate a semester early, which would have been this semester. However, she said that she will not be able to complete her final film thesis remotely.

“I’ll wait until next spring,” she said. “Hopefully, knock on wood, it will be a little bit better.”

Dotten said that she was upset that the college made the decision to hold the semester remotely so close to the beginning of the planned move-in and the start of the semester. She said that she applied to over 20 internships and jobs while deciding if she wanted to go back to school or not. Now, she said she is going to start working with her dad while she waits to hear back.

Senior Joel Liss also decided to take a gap semester rather than take his classes online. Liss said that he started thinking about taking a semester off before Spring 2020 had ended because he had a feeling that Fall 2020 was going to be remote. Liss said he is tutoring two elementary school children while he is living in College Park, Maryland.

“I think spending the amount of money that Ithaca College costs to study film online is a waste of my time and my money,” Liss said. “I’m not going to school just to get my degree. I’m going to school to get these hands-on experiences.”

Sophomore Emma Johansen said that she did not consider taking a gap semester for the fall but that she is considering it for Spring 2021 if classes are held online again. At the All-College Gathering on Sept. 22, Collado said the college intends for students to return to campus for in-person classes in the spring. Maley said a phased move-in plan for students living on campus is being developed and will be announced once it is finalized.

“I don’t think that I’ll get as much or enough out of that experience from my bedroom at home,” Johansen said.