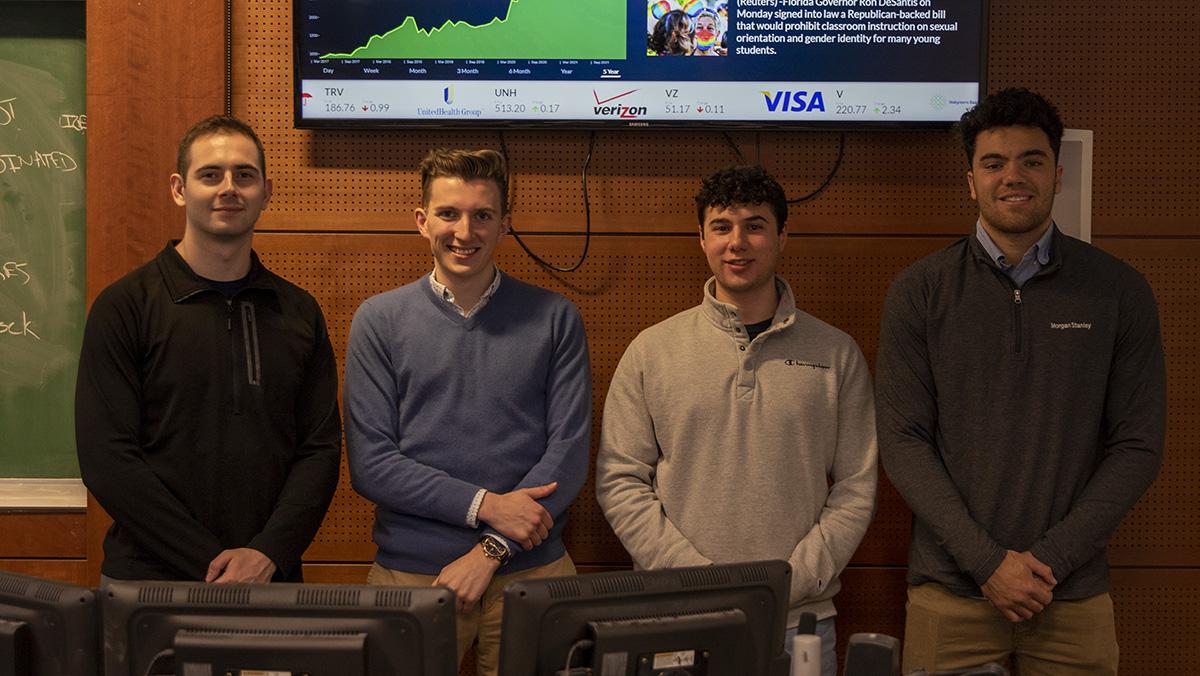 The Core Trading Consultants (CTC) club at Ithaca College prepares its members for a successful career in the financial industry, and provides valuable experiences by applying practices from real investment firms.

CTC is a student-run organization that allows members — currently 30 students — to integrate their course work with real-world experiences in financial services. The CTC works alongside the School of Business by providing new opportunities for the club’s members to expand their financial knowledge, experience and confidence. Members have a chance to build relationships with fellow students, professors and the alumni network. CTC is open to all students regardless of their major as it aims to teach the importance of properly trading and investing in stocks.

Junior Maxwell Perry said CTC has helped him develop and grow as a finance major. He said he enjoys working alongside other students who have the same interest in business and finance because he feels everyone can collaborate and share ideas.

“The best thing about [CTC] is working with a bunch of like-minded people,” Perry said. “I’ve learned just as much from CTC as I have from taking some of my major’s classes.”

Similar to how an investment bank functions, CTC breaks its members into sector groups, which are known as CTCs. These groups have additional meetings and research companies within their industry, set up a watch list of firms and compare fundamentals between the firms.

Junior president Calvin Carmichael said the club conducts itself the same way an investment bank operates, whether it is interviews for the executive board or trading and investing.

“Traditionally, finance is a very competitive space,” Carmichael said.” So everything that you can possibly do to set yourself apart is going to be very valuable.”

CTC uses a discounted cash flow model (DCF), which is a method of valuing an investment based on future cash flow.

Carmichael said the club uses the DCF to track the revenue of companies like Home Depot and Gamestop. When investing in stocks, he said he wants to teach people how to do it successfully.

“I think the biggest thing that [CTC] prepares you for is a traditional finance track that you would be going into on investment day,” Carmichael said. “There’s so many facets of a business you need people to dissect every piece of it and take into consideration what is comparable to it or what makes it different.”

When it comes to ethical trading — Carmichael said CTC takes time to research everything about a company before investing. He said he feels there are more risks to trading than investing because someone can easily lose their money if they are mainly focused on increasing their profits.

“The overarching theme that we have in our club is that we invest for the long term,” Carmichael said. “I think what fuels investment decisions is the six to eight weeks that we go through and just really dig into a company and build that valuation model. We think we’re giving people the tools to go out in their lives and invest properly.”

Members of the group aspire to hold internships in major financial services companies such as Goldman Sachs and Chase Bank. Neither of these banks promote ethical trading. Goldman Sachs has been in the news multiple times for misdeeds, ethically questionable practices, and manipulating the stock market. The bank paid a $550 million fine for selling mortgage-backed securities to clients while betting against those securities with the bank’s own capital.

Chase Bank was accused of manipulating the U.S. market from 2009–16. JPMorgan Treasury’s traders placed orders on one side of the market which they never intended to execute and created a false impression of buy or sell interest that would raise or lower prices. Chase used spoofing, which is designed to create an illusion of demand or a lack of demand.

Junior Alex Murphy, said CTC has done a great job in preparing him for a career in finance. He said he was able to complete an internship at Wolfe Research during summer 2021.

“I was ahead of all my peers and my intern class even though they went to Ivy League schools, which are considered top in the world,” Murphy said. “I knew the hard skills associated with the work such as financial modeling and how to present in PowerPoint and Excel.”

Members of the executive board have expressed how difficult it was to maintain student engagement during the COVID-19 pandemic but that while attendance dropped significantly during the start of the pandemic it has slowly risen since.

“I felt like but this year we’ve had a great rebound and the room was full of passionate people that really enjoy this and people are making great friends,” Murphy said.

College recommending finalists for VP of finance by end of April