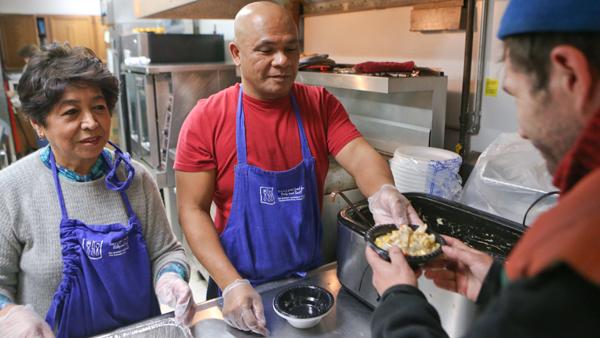 Jason Wilson comes to Ithaca’s Loaves and Fishes almost every day for a hot meal. For the past few years, these meals have become a part of Wilson’s life. Without them, he said, he’d go hungry.

“[Loaves and Fishes] is part of my survival,” Wilson said. “I have 70 cents in my pocket right now, and I won’t get more until the end of the week.”

As the holiday season approaches, local food charities are facing more shortages, rising costs and increasing demand for services this year than in previous years. However, these organizations have also seen more donations and contributions on the local level.

“There is a gap between what we are doing now and where we hope to be, and we are in huge expansion mode right now,” Cicerchi said.

“In the last two years, we’ve been trending towards more folks who never required our services coming to us for first time,” Carvill said. “Tompkins County is one of the more affluent counties in the state, and we tend to have economic issues hit us after other counties in the western Southern Tier are hit hard.”

Along with its regular programs and their iconic red kettles, the Salvation Army has also served free Thanksgiving dinners for 30 years. This year, Carvill said, the mission served around 150 patrons in Ithaca, with more than 100 volunteers. Last year, the mission served about 90 people.

Last year, Loaves and Fishes served about a total of 32,645 guests, which is nearly 4,000 more guests than in 2010, according to their annual report.

The Food Bank prepares baskets that are delivered directly to families in need, Cicerchi said. The organization had been stockpiling turkey dressing, cranberry sauce and other supplies for months, and they delivered about 2,400 turkeys to local food pantries and soup kitchens. The Food Bank saw a 27 percent rise in emergency food demand after the Great Recession of 2009, and Cicerchi said there is still an upward trend.

“Holiday season is a time of particularly great need,” Cicerchi said. “The weather gets colder, and distressed families have trouble paying rent, paying for fuel and buying food.”

Economic downturn has also had its effect on operations. Carvill said rising transportation costs, including more than 20 percent hikes in local fuel prices, have added to the cost of delivering food and the food itself.

“Transportation is something that affects us all, up and down the food chain,” Carvill said. “With petroleum prices all over the map, it’s not the ear of corn that costs us so much as getting that ear of corn to the market. Every commodity is affected.”

However, an increase in donations and volunteers has helped compensate for the financial struggles faced by charities. Marian Brown, special assistant for campus and community sustainability and a member of the United Way’s campus fund-raising committee at Ithaca College, said despite the economic downturn, the organization’s fall fundraiser has reached 80 percent of their $65,000 goal.

“Running the numbers, there are a lot of first time donors, about 25 percent,” Brown said. “Even the folks who gave before, the statistics show that giving is up over 15 percent from last year.”

The Food Bank raised $4.75 million toward a capital campaign to expand their services. In February 2011, they moved into a facility four times larger than their previous one. Cicerchi said this move has led to a 20 percent increase in volunteerism.

“This facility enables us to store more food, to pack it, to have more volunteers, to have more trucks to come and ship it out,” Cicerchi said. “We have increased our food distribution very significantly.”

“We will see it soon, but we’ve been able to keep up because of all of the donations from the community and fresh food.”

“Tompkins County and Ithaca have a very strong, positive history of supporting not-for-profits,” Carvill said. “Folks step up and are adequate to the challenge.”