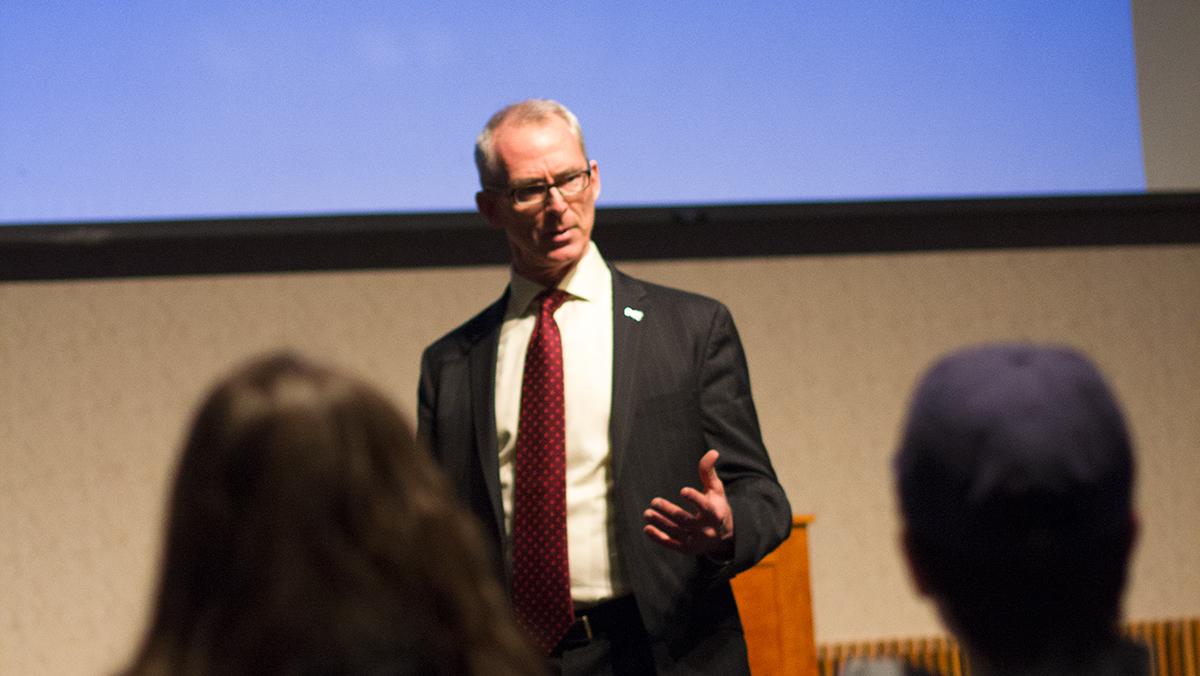 Politicians barely discussed climate change during the 2016 election, but the Ithaca College Republicans decided to bring to campus one for whom this discussion takes priority.

About 30 students attended the event held in Emerson Suites on Dec. 6. Junior Kyle Stewart, president of the club, said he recognized the college community’s concern regarding climate change and invited Inglis to provide an alternate conservative perspective.

“There is a large number of students on this campus who care very passionately about climate change,” Stewart said. “I wanted to bring in a conservative speaker who also believes in that to have a good discussion on the topic.”

Inglis is the Executive Director of RepublicEn, an organization of conservatives, libertarians and pragmatists who share compassion for the environment and work to pursue the effective ways to reduce the risk impact of greenhouse gas emissions on the atmosphere. The members of the organization define themselves as energy optimists and climate realists who believe that the liberal tactic of imposing regulatory solutions is not plausible, Inglis said.

“We think at RepublicEn.org … that a regulatory approach is a very clumsy way of bringing accountability from emissions,” Inglis said. “It’s prone to litigation and … it’s domestic only.”

The position of RepublicEn is that the enterprises that create large-scale emissions should be held liable for the negative effects they impose upon the environment.

“What if we just had accountability for emissions — eliminated all the subsidies and just made all the fields fully and transparently accountable for all their costs so that the marketplace can judge those products?” Inglis said.

He said people need to be held accountable for acting as an invasive species by engaging in carbon emissions. The possible consequences of unregulated carbon emissions are visible in the alteration of weather patterns that is projected to worsen, Inglis said.

Sophomore Meredyth Busam attended the speech, and she said she was fascinated by Inglis’ idea on how a conservative spin on the issue could be beneficial.

Junior Caleb Slater, director of programming for the IC Republicans, came to learn more about climate change and its global effects.

“I do acknowledge its significance in not just the nation but the world,” Slater said. “This is one particular topic that I am less informed on than others, and I came to learn.”

Inglis said he wants to close the political chasm for the sake of the environment by finding a resolution that both parties can agree with.

“If people could just see that there are both liberals and conservatives who could agree on the same solution, then we’d have some sense that, gee, this thing can be fixed, can’t it?” Inglis said. “All we have to do is increase the sense of efficacy.”