Free college plan likely to have impact on Ithaca College 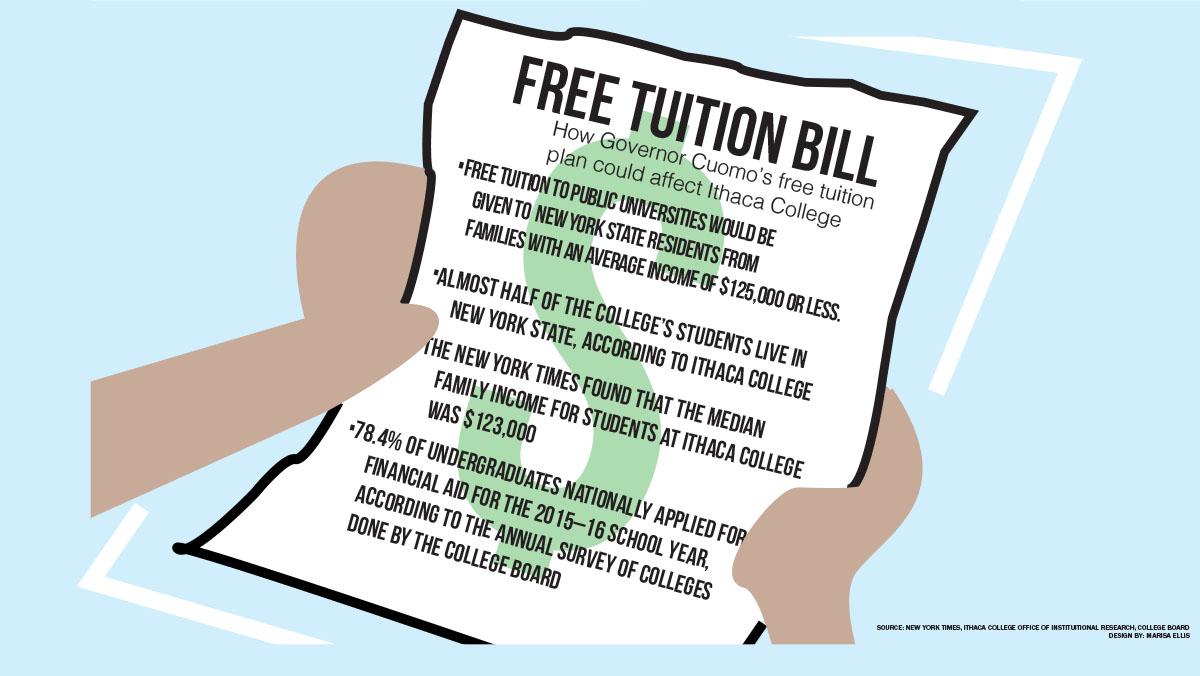 Governor Andrew Cuomo’s recently proposed free-tuition plan for public universities has raised concerns with school administrators and higher-education experts who believe the bill may put private colleges, like Ithaca College, at a disadvantage economically and politically by creating competition for enrollment.

The Excelsior Scholarship would cover tuition to all New York state and city universities for the over-950,000 students with families that have an annual income of $125,000 or less. According to the governor’s website, the scholarship is proposed to work as an after-cost or leverage program, meaning that it would cover the remaining difference once existing financial aid plans, such as New York’s Tuition Assistance Program or Federal Pell Grants, have been applied. Currently, most lower-income applicants already receive enough aid to cover the $6,470 tuition fees at SUNY or CUNY schools from the Tuition Assistance Program and Pell Grants, according to the programs’ websites.

There are close to 200 private colleges and universities in New York, according to the Commission on Independent Colleges and Universities, accounting for over half of the schools in the state and 40 percent of the state’s enrolled college students. Four thousand two hundred eighteen Ithaca College students, or 78.4 percent of undergraduates, received financial aid for the 2015–16 school year, according to the Annual Survey of Colleges by the College Board.

Sara Belcher is one of those students. From Phelps, New York, a small town outside Geneva, she lives equidistant from three of western New York’s popular college towns: Ithaca, Rochester and Syracuse. When it came time for her to decide on where to go to college, two of the major factors in her decision were cost and quality. Belcher applied to many institutions, both public and private, including SUNY Plattsburgh and SUNY Geneseo.

“Finances were a large role in my final decision, but not to the point of complete exclusion,” Belcher said. “Really, I was looking for schools with great communication programs. I chose Ithaca because they were the only college I applied to that lived up to the high expectations I had for the communications department. They were also one of the cheaper colleges I applied to after financial aid was considered.”

At the college, close to half of the students are in-state, according to the Office of Analytics and Institutional Research. The New York Times found that the median family income for students at the college was $123,000, which means a majority of students would qualify for the Excelsior Scholarship.

Tuition is a fraction of the cost of a college education. According to the Office of Financial Aid, while average tuition is $41,776, total costs of attendance range from $55,000 to $60,000 when including fees such as room and board and textbooks.

Whereas Belcher said the financial benefits of the bill would not have been great enough to sway her decision, former student Elizabeth Keselman said she believes the bill would have influenced her original choice. Keselman said she fell in love with the college when she researched it and said she figured she would find a way to pay for it after receiving a scholarship that covered about half of her tuition, in addition to need-based grants and federal loans. Keselman is from Brooklyn, New York, and transferred from Ithaca College after three semesters to Binghamton University this year due to financial complications.

“If Cuomo’s bill was in effect when I was applying, I would’ve probably attended a SUNY,” she said. “I ultimately transferred because my mother said she wouldn’t pay for my tuition at Ithaca the next semester because it would be too high for her to pay for another 3 years.”

Even so, Martin Van der Werf, associate director of editorial and postsecondary policy at Georgetown University, said the idea of free tuition has the potential to draw away a significant portion of applications from private colleges, specifically smaller ones that rely on tuition. Ninety-one percent of the college’s revenue comes from student sources, according to the 2015–16 college budgets.

“There are a large number of prestigious private colleges in New York — schools like Cornell and Vassar that are almost exclusively competing with other private colleges and would probably not feel much effect from this,” Van der Werf said. “The smaller, less-elite privates that compete pretty aggressively with publics are the ones at risk. I would think that given that if their students are trying to choose between a public and a private, the elimination of tuition might be a deciding factor.”

Enrollment in public universities could increase somewhere between nine to 22 percent, 15 percent of which could be coming from private institutions, according to a study from the Georgetown University’s Center on Education and the Workforce on the effects of Hillary Clinton’s presidential campaign’s free-tuition plan. Due to the similarities between the two plans, Van der Werf said those statistics would be the same for Cuomo’s bill.

Van der Werf also said the issue of finances is obviously not the only aspect of making a college decision, and he said the education itself should be factored in.

“I think that there would certainly be a temptation to go with the free option if the quality of education is equal or at least close to what they’re getting at a private school,” he said. “The question then is what constitutes equal? That’s going to vary college to college and family to family.”

Jason Lane, chair of the Department of Educational Policy & Leadership at the University of Albany, said the competition between private and public institutions is reflected in the role of finances in a student’s decision.

“In the postrecession environment with a heightened media focus on student loans and questions about the value of a college degree, students seem to have become more highly cost-sensitive than in the past,” Lane said. “They also tend to have a heightened realization that one can receive a high-quality college experience at both public and private institutions.”