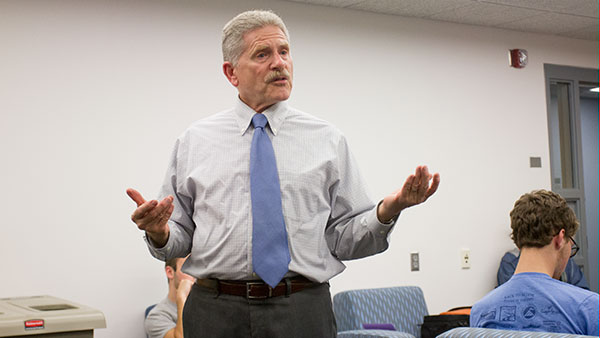 Jen Kim/The Ithacan
Bob Freeman, executive director of The New York State Committee on Open Government, speaks with journalists about the Freedom of Information Act during his visit to Ithaca College on Sept. 16.
By Evan Popp — Contributing Writer
Published: September 17, 2014

Freeman, the executive director of The New York State Committee on Open Government, spoke at Ithaca College on Sept. 16 to discuss FOIA, and the New York State equivalent to FOIA — the Freedom of Information Law. His audience consisted of around 20 people, who were primarily student journalists and journalism professors at the college. The event featured a lively discussion with Freeman fielding questions about the nuances of the FOIA and how to obtain governmental documents.

Freeman said the U.S. government has abused its privilege to withhold certain documents, especially when claiming it is because of national security.

“I think that federal agencies have used that with impunity to the detriment of everybody,” he said. “And the reality is that federal courts have rolled over for the military and defense communities. If you bring a lawsuit under the FOIA, the government has to meet the burden of truth.”

Freeman said The Committee on Open Government in New York aids journalists and other citizens in navigating the FOIA, particularly when requests are delayed or denied by the government. He said his job inevitably involves him making someone angry.

However, Freeman said the New York version of the law, FOIL, is slightly different — and in his opinion more open — than the federal law.

“Our courts [in New York] have been much more serious about the government’s responsibility to meet the burden of defending secrecy,” he said.

Freeman also talked about the question of whether it is currently more difficult for journalists and citizens to get information than it used to be. He said advances in technology have afforded journalists more tools in accessing sensitive information, but he also said it is more difficult than it was 30–40 years ago to call a government agency and speak to someone other than a public relations employee.

James Rada, an associate professor in the Department of Journalism and organizer of Freeman’s visit, said he wants to make Freeman’s visit a regular event because of the wealth of knowledge Freeman provides.

“I think it’s part of being a good, not just journalism student, but being a good student of democracy to know how your government works and what information is available to you as a taxpayer,” Rada said.

Junior Erica Moriarty said she came to the event to get a better understanding of FOIL.

“I was interested in hearing more about the Freedom of Information Law because I really didn’t know too much about it and what information is available to us, and then also the best ways to get that information,” she said.

Freeman said he thinks the most important work he does with the FOIA and FOIL is on the state and local level, explaining that in his experience, local officials are much more willing to cooperate with information requests than the federal government.

“Locally is where these laws, from my perspective, are absolutely most useful, most significant and where they have the most impact,” he said.