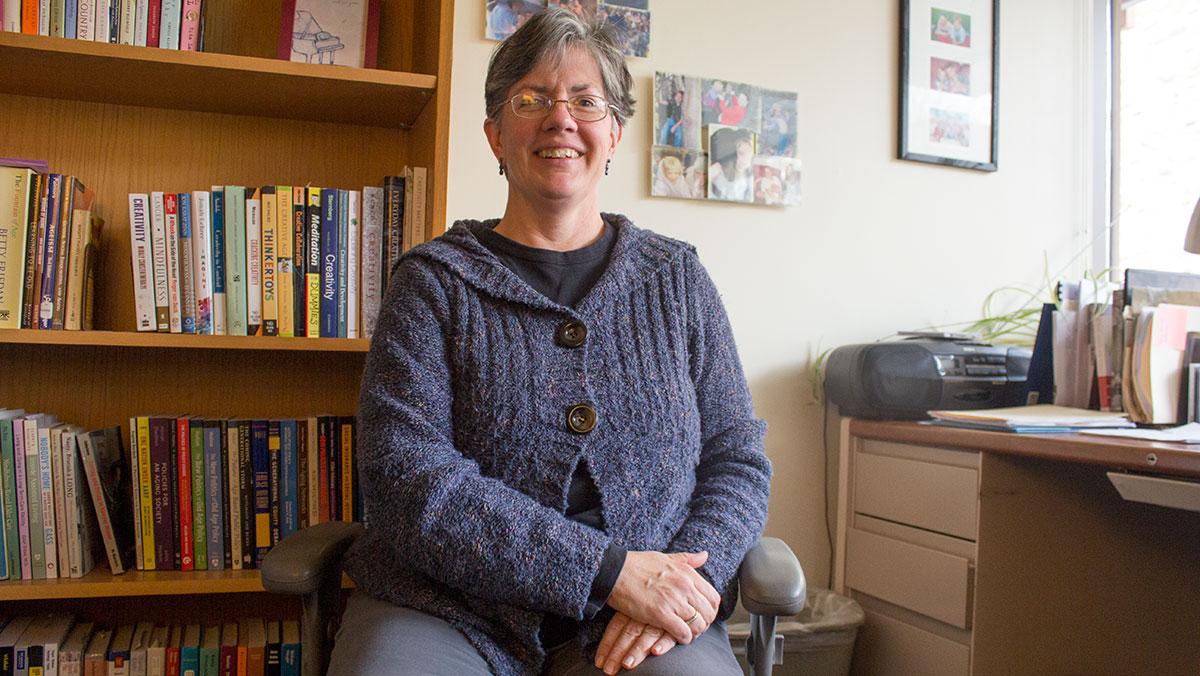 Sabrina Knight/The Ithacan
Mary Ann Erickson, associate professor and chair of the Department of Gerontology, said the purpose of the State Society of Aging of New York is to bring together the education, health and government communities.
By Sabrina Knight — Staff Writer
Published: November 11, 2014

Mary Ann Erickson, associate professor and chair of the Department of Gerontology, was recently selected as president-elect for the State Society of Aging of New York.

The purpose of the organization is to bring together members of education, health and government who are interested in improving the quality of life for older New Yorkers. Erickson has been a member of the organization for 18 years since she was a graduate student at Cornell University.

Staff writer Sabrina Knight sat down with Erickson to discuss her involvement in the organization, her plans for the future as president-elect and how students can get involved.

Sabrina Knight: What is your favorite part of the State Society of Aging?

Mary Ann Erickson: You really get a chance to meet and get to know people who are in the field in the state … There is also an emphasis on students and student participation. There’s an undergraduate and a graduate paper award, and for the last two years, an Ithaca College student has won the undergraduate paper award, which we’re very proud of. It’s also nice that you have a chance to bring students into that network and help them potentially find jobs or graduate programs.

SK: What have you gained from being part of the group?

MAE: A lot of it is networking and the chance to get to know people on a more personal and ongoing level, so there are people I know who work in the Veterans Administration — obviously many of those people are older — and they’re concerned about educating people to work with veterans. I might not have known that much about this piece if I hadn’t gotten to know this woman through the State Society of Aging. I’m well-networked with other people teaching about aging throughout the state … Being a resource for other people and feeling like other people can be a resource for me is important.

SK: How can students get involved if they’re interested?

MAE: We support student attendance at the conference. There are also student members of the board, so there is a student committee that looks to put on events for students … We’re always looking for students who have interesting ideas for connecting or putting on educational programs.

SK: How did you get to be nominated?

MAE: I’ve been other officers: I was treasurer for several years, I was membership chair, right now I’m secretary. So there is kind of a sense of everyone who is committed to the organization takes their turn … Next year, in 2015, I’ll probably organize the conference as president-elect, and in 2016 I’ll be the president and the next president-elect will organize the conference. That’s usually the way it goes.

SK: What do you hope to achieve as president-elect?

MAE: Organizing the conference is going to be challenging — you have to negotiate the place and publicity and submissions that people give you — but I’ve been to a lot of conferences, so I feel like I’m going to get a different view of what it looks like to put on a conference, so I think that will be valuable.

SK: What do you wish to change about the organization?

MAE: We’ve suffered recently in membership … People who are interested in our organization have fewer funds to travel, so I’d like to see more people be involved and benefit from the organization.