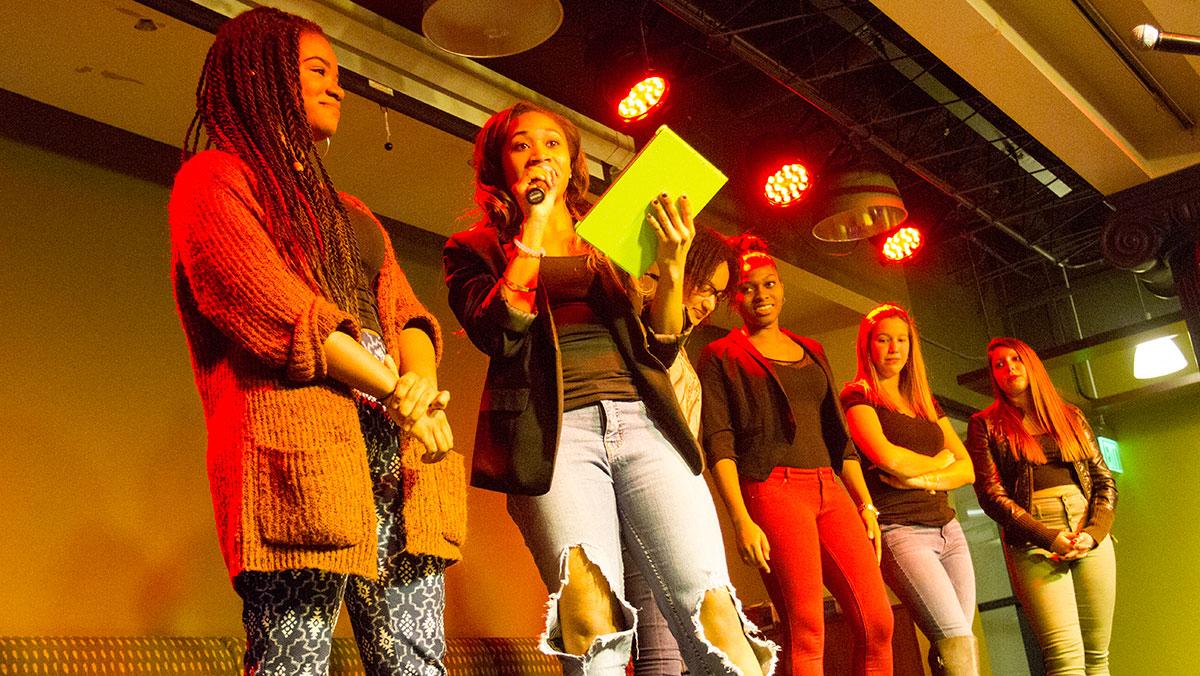 Amanda den Hartog/ The Ithacan
The Ithaca College Cheerleading Team and Pulse took turns auctioning off their members, and most women went up onstage in groups of two and three.
By Yena Seo — Contributing Writer
Published: February 11, 2015

Donning dresses and skirts and sporting high-heeled shoes, members of the Ithaca College Cheerleading Team and Pulse, the college’s only exclusive hip-hop team, hosted a joint date auction in IC Square on Feb. 6. The auction was held as a fundraiser for both teams to attend the National Cheerleaders Association & National Dance Alliance Collegiate Cheer and Dance Championship from April 8–12 in Daytona Beach, Florida.

The auction was the second fundraiser hosted by the teams this week, with a previous fundraising event held at The Moonshadow Tavern on Feb. 4. Senior twin sisters Jasmine and Jennifer Spearman, members of the cheerleading team and Pulse, respectively, served as emcees for the event and came up with the idea for the auction after watching the television show, “Hellcats,” a cheerleading television show that used to air on the CW network.

“They were raising money for Nationals, just like we are,” Jasmine, who serves as the vice president of the cheerleading team, said. “I knew then that I wanted to participate in something like that, so we finally made it happen.”

The two teams took turns auctioning off their members, and most women went up onstage in groups of two and three. Mini-biographies were read for each woman, to the amusement of team and audience members. The biographies included each woman’s interests, hobbies and what kind of date she would take the highest bidder on.

“The girls’ bios were more humorous and less serious, and it was fun hearing the audience’s reactions to them,” freshman Nicolette Tigno, a member of the cheerleading team, said. “But it was awkward when a girl would be up there and no one would say anything or bid on her because her friends hadn’t come yet.”

While the first few women were auctioned off for bids in the single digits, both bids and energy increased throughout the course of the event, with several “bidding wars” occurring throughout the night. Several dozen people were in the audience and many of the winning bids came from friends of team members.

“I know I, along with many of my teammates, felt uncomfortable with the idea of being auctioned off to a random stranger, so a lot of the team brought roommates and friends to bid on them,” freshman Kaitlyn Crobar, a member of the cheerleading team, said.

Each team auctioned off 14 women. At the end of the event, Ithaca College Cheerleading raised $310, while Pulse made $363. The highest bidder was freshman Demi Philibert, who bid $60 for a date with freshman Pulse member Shalice Hunt.

“As a concept, the auction was basically the closest thing to slavery that you could pass off as a fundraiser,” freshman Tyler Sapp, who attended the auction, said. “You could make the argument that it was ‘all in good fun’ or ‘for a cause,’ but the girls didn’t really have a choice.”

Members of the cheerleading team and Pulse disagreed with such sentiments, and said male students from Ithaca College athletic teams could also host such an event, and that team members tried to ensure that the women felt comfortable with the bids being made on them. Last February, VIC Radio hosted a “Find a Friend” speed dating auction, which included male and female participants.

“I don’t think that the date auction was objectifying women, because it could have just as easily been one of the men’s teams at our school auctioning off its players for dates,” Crobar said. “In a couple cases, random people bid on some of my teammates, so we tried to outbid them so that they were not forced to go on a date with a complete stranger.”

At the end of the event, members from both the cheerleading team and Pulse were excited about the money they had raised through the event, which will go toward uniforms, transportation and other costs associated with attending Nationals.

“At first, I wasn’t sure if we would raise enough because college students don’t have a lot of money,” Tigno said. “Afterwards, I thought it was a good idea, and we raised more money than I thought we would get.”