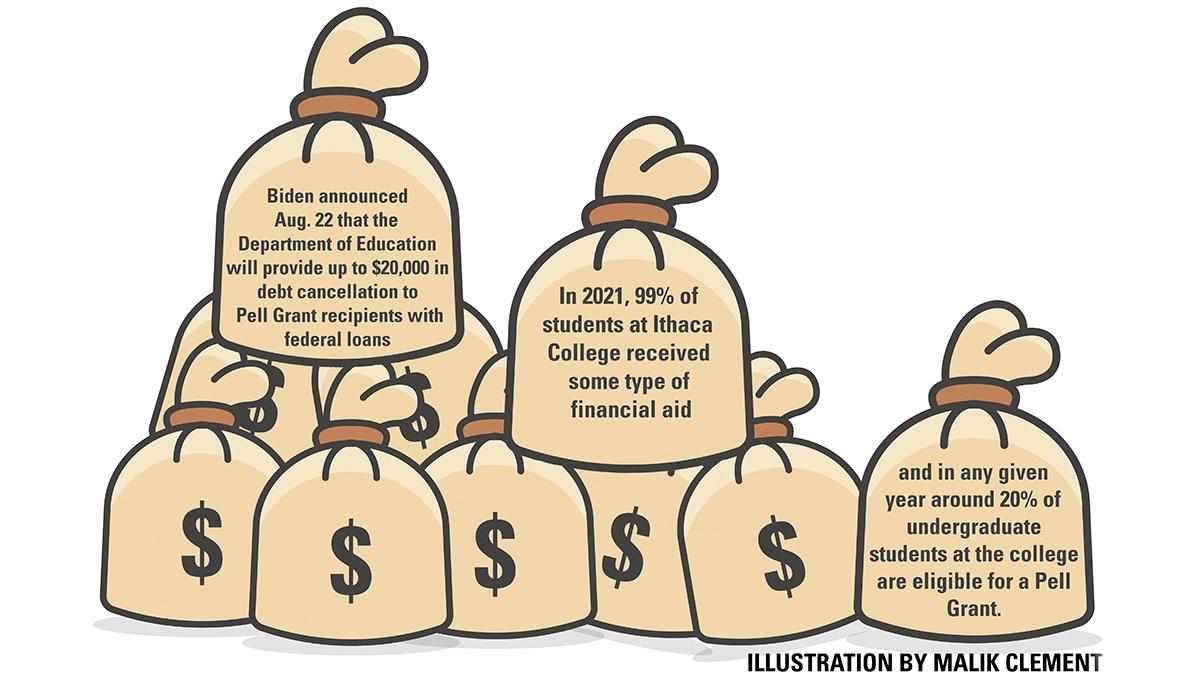 Some students at Ithaca College feel that President Joe Biden’s plan for federal student loan debt forgiveness is a first step in addressing the cost of higher education.

According to the Education Data Initiative, as of July 2022, student loan debt in the U.S. totals $1.7 trillion spread out among 43 million borrowers, while the outstanding federal loan balance — loans only borrowed from the federal government, not from private loan companies —  is $1.6 trillion and accounts for 92.7% of all student loan debt.

Shana Gore, executive director of Student Financial Services, said that she thought the plan was a step in the right direction for helping students and families with college debt and that the college is supportive of any measures that can improve access to education.

“I think some of the administrative aspects about the plan — how specifically it will be implemented by the government, the application process, how the data will be collected —  those are things that we’re talking with our colleagues at other institutions, some higher education organizations, and just awaiting further information so that we can be well educated on all the details and see how we can best help students and alums take advantage of this program,” Gore said.

“I just think that we’re just kind of at this point waiting for the details to be worked out by the government, so that we can find those opportunities, so that we can make sure that we help students best understand how to benefit from the plan,” Gore said. “I think that’s often an issue with some of these federal programs, is making sure that everyone eligible is able to benefit from them. So we will see what types of measures we can take, and how we can be proactive with that.”

Some critics of the plan argue that it will disproportionately benefit high earners and raise economic inflation.

Chee Ng, assistant professor in the Department of Finance and International Business, said those arguments depend on the effectiveness of the way the plan is implemented.

“I am sure President Biden’s proposal has its means-tested mechanism embedded in it in order to be ‘fair’ so that the higher-earners don’t take unneeded advantage of the system,” Ng said via email. “But, circumvention of any regulation is only a natural human response. Any imagination otherwise is simply altruistic at best, and will beget implementation fiasco.”

Junior Lily Kimball Watras said the debt relief plan would help her cover around half of her student loan debt, and after learning about the plan, her father encouraged her to sign up as soon as possible.

According to the announcement, the Department of Education is working to set up an application process for borrowers to claim relief. The application will be available no later than when the federal loan repayment pause ends at the end of 2022.

Kimball Watras said she thinks that student loan debt is a concern for most college students and that while $10,000 is a good amount, it is not nearly enough for many people to cover the full extent of their loan debt.

“I would hope there’s more in the future,” Kimball Watras said. “I mean, there’s a whole lot going on and I don’t know if that’s going to be something that’s on the front of everyone’s mind, but I hope it is.”

Sophomore Aiden Harman said he thought the plan was a step in the right direction due to the financial inacessability of higher education in the United States, but thought it was disadvantageous toward people who struggle to pay for college that can barely qualify for those loans or people who received loans through a private bank.

Harman said he did quality for the Pell Grant, but does not have loans taken out through the federal government.

“I do fall under the notion of people who don’t make that much money in this country,” Harman said. “So I just wish that what would have been worked into it were all people who qualified for the Pell Grant would receive at least a little bit of money, whether that’s in form of a check or something like that, instead of just canceling out government loans.”