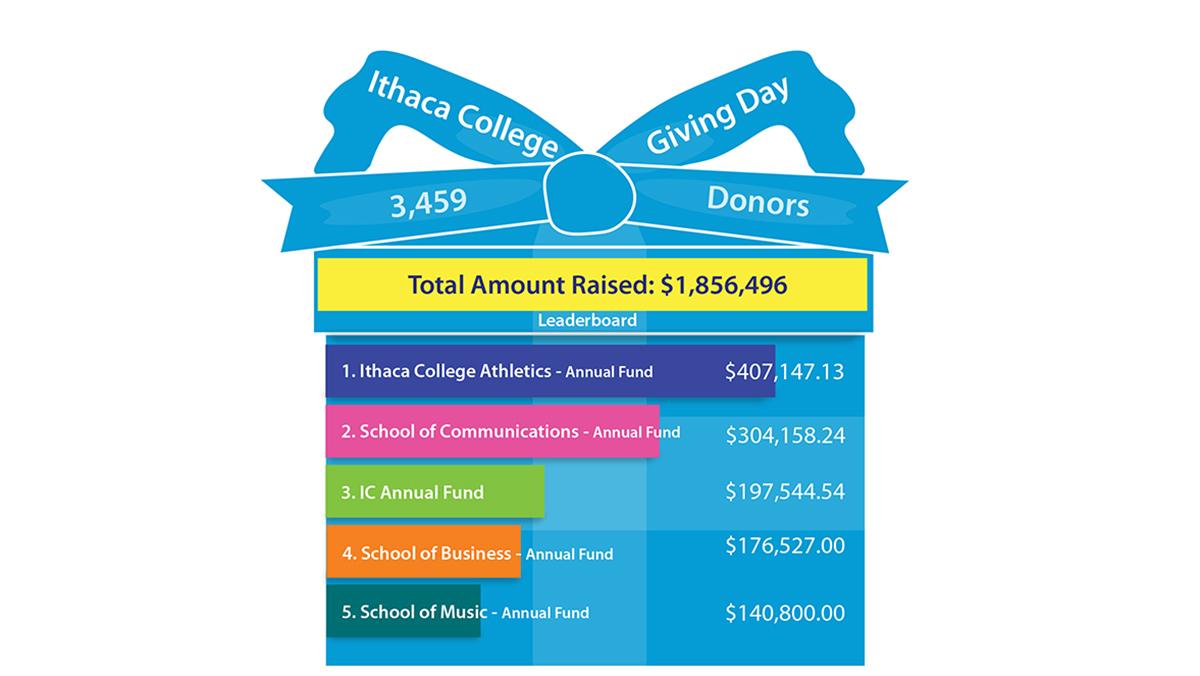 Anna McCracken/The Ithacan
Ithaca College's Giving Day, which took place May 4, raised a total of $1,856,486 from 3,459 donors, according to the Giving Day website.
By Jillian Bleier — Staff Writer
Published: May 6, 2021

Giving Day, which took place May 4, raised a record-breaking total of $1,856,486 from 3,459 donors, according to the Giving Day website. Some campus community members have disagreed over whether Giving Day is justified amid the Academic Program Prioritization (APP) Process, which resulted in the cutting of 116 full-time equivalent faculty positions and the discontinuation of over 20 majors and programs. Many students and alumni have said they disapprove of the college’s plan and feel that the college has not been transparent in its decisions, and as a result, chose not to donate. Others have argued that the nature of these cuts highlights the importance of Giving Day this year.

The goal of Giving Day was to encourage online donations in a 24-hour time period, between midnight and 11:59 p.m., from college community members. The first and only other IC Giving Day was in February 2015 and raised just over $700,000, Wendy Kobler, vice president of the Department of Philanthropy and Engagement, said. The majority of donations come from alumni, friends, families, staff, faculty and local community supporters, Kobler said.

Kobler said the college decided to hold a giving day this year due to giving days being one the best financial practices in the college industry. Giving days can be especially valuable for colleges and universities looking to engage students and recent alumni in lifetime giving, according to an article from the Chronicle of Higher Education, written by Emily Haynes, a staff writer for the Chronicle of Philanthropy.

Haynes said in an interview that giving days are primarily used to engage small-dollar donors and to keep positive relationships with alumni.

“Oftentimes, school administrations will see giving days as a way to keep recent grads or students involved,” she said. “They’re kind of like practice for the real thing, which would be like a more meaningful gift, a gift of a much larger size, once they’re maybe in their 50s, 40s.”

After Giving Day concluded, Kobler said alumni showed up ready to give.

“Joining our alumni in showing their Bomber pride were current students, families, faculty, staff, and other friends and supporters of the college who challenged one another to contribute to important programs and initiatives that will have a lasting impact on the institution that they love so much,” she said via email.

Susan Bassett, associate vice president and director of Intercollegiate Athletics, said she is thrilled and humbled by the support that athletics received from alumni.

“It ensures that we can continue to make Ithaca College a distinctive educational experience, and athletics is part of that,” she said.

“The funds contributed to our Ithaca Fund go to support initiatives like tours, guest artist presentations, student travel, music instrument purchases, and other special projects,” he said via email. “We continue to be grateful for the support we receive as we work to study and perform music with the goal of making the world a better place for everyone.”

Kobler said she does not expect any decrease in alumni donations due to the implementation of the APP. She said she thinks most people want to help their alma mater and its students, just like they were helped by alumni when they were undergraduates. The percentage of alumni who donate back to the college has decreased from 12.1% in 2010 to 6.4% in 2019. The percentage of alumni who donated to the college dropped slightly to 6.2% in 2020, Kobler said, which she attributed to the COVID-19 pandemic.

Ithaca College Alumni Against Austerity (AAA) is a group of alumni that aims to inform other alumni about the APP and support current faculty and students. Anneke van Rossum ’19, a member of the AAA Facebook group, said she and a lot of her friends from college were not planning on donating due to the elimination of faculty and majors.

“What Ithaca is all about is bringing all these walks of life and bringing out the uniqueness in people,” she said. “I think donating to a school that seems to be slowly moving away from that, you are not donating to the Ithaca you went to.

Kasey Stevenson Buck ’10 said she graduated from the aging studies program in the Department of Gerontology, a major that the APP recommended to be cut. She said she has not donated in the past and will not be donating this year either.

“They have decided that my program is not valuable enough to keep it around, for whatever reason that is,” she said. “It does not speak to me to donate if they are going to cut the program that I was in.”

Alumni in the Facebook group have also expressed concerns over donating with the current administration. John Simon ’80 said he hopes the administration will connect more with alumni in the future, and not just about donations.

“I really wish they would engage more with alumni in a positive way,” he said.

Simon said he has donated in past years, but that he would not be donating this year. He said some alumni are saying now is the time to step up and donate due to the APP reflecting the financial state of the college.

Sophomore Connor Watson, a member of the Philanthropy Committee for the Alumni Association Board of Directors, said via email that the APP is a clear indicator that Giving Day is very important.

“I think there is great misunderstanding surrounding Giving Day and giving to IC in general; so many of my peers perceive it as, ‘I already pay tuition! Why pay more?’” he said via email. “And to those individuals I ask: have you ever been a part of a student organization? If yes, did that organization ever have a budget that was used for programming or events? Thank Giving Day.”

Kaylee Collins, senior associate director of engagement, said all donations from 2015, just over $700,000, went to annual funds, which means that they are immediately used.

Watson said he thinks Giving Day is important to the financial health of the college. During an All-College Gathering on Feb. 9, President Shirley M. Collado said the current budget deficit for the 2020-21 fiscal year is estimated to be approximately $24.5 million.

Sophomore Sara Stohl, organizer of Open the Books (OTB), said OTB is not very happy about the college’s decision to have a giving day amid the cuts.

“Everything we love about this school is being dismantled and we are being told, you know, to give the school our financial support, which at this point we don’t even have a lot of emotional support for this school,” she said.

Stohl said OTB works with AAA very closely, and that alumni she has spoken to do not want to give money.

“I think the fact that their emotions are not being validated, I think the fact that they are being silenced and told that they’re just wrong and all of the things and feelings they’re expressing are non-productive, is really hurting the IC community,” she said. “If you want a great network of alumni, if you want students and ex-students that are going to want to care about their school, don’t tell them to shut up and don’t pretend like everything’s fine when things really are not fine.”

Sophomore Julia Tomanovich helped raise money for Giving Day as a member of the women’s cross country team. She said she hopes some of the money from Giving Day can be used to support the faculty who are getting cut.

“I think giving days are great and that we should take that kind of idea and I think we could apply it to helping out faculty so that we can avoid a lot of let-go’s that are very undeserving,” she said.