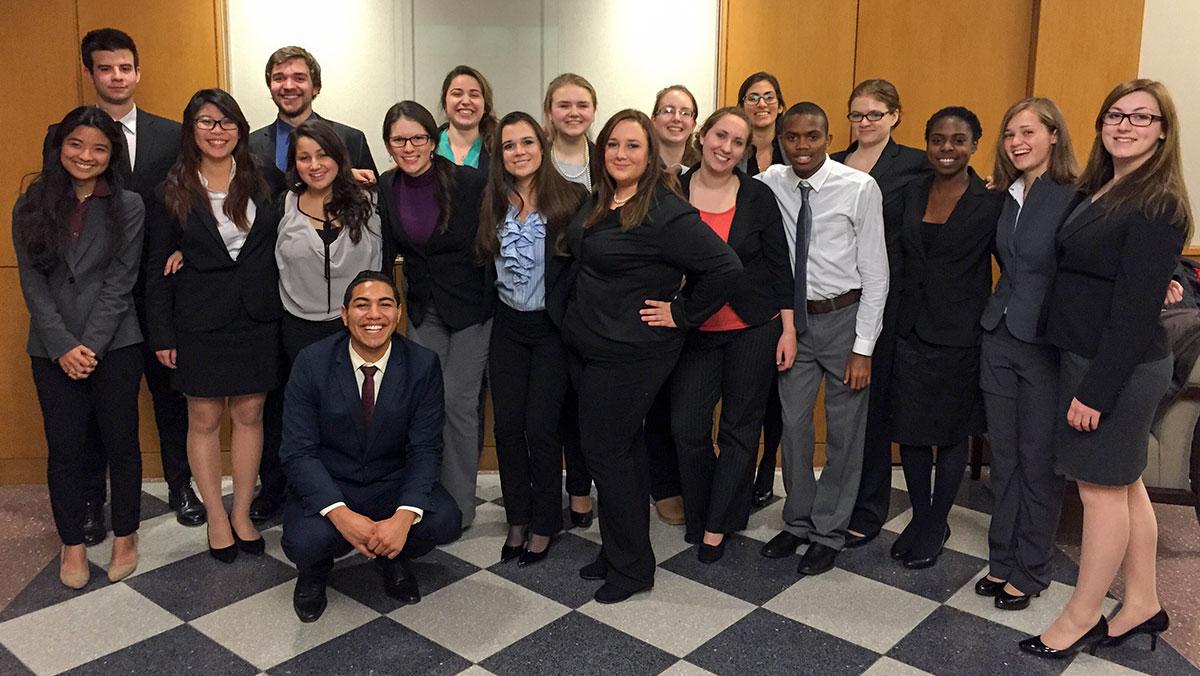 Courtesy of Louisa Ahlqvist
The Ithaca College Mock Trial Team competed at the fifth Annual Colgate Classic, which was held Nov. 1 and 2 in Hamilton, New York, on Colgate University’s campus. Colgate’s invitational was the first invitational of the season.
By Aidan Quigley — Staff Writer
Published: November 5, 2014

The case Andy and Lee Park v. Hayden Duran features the death of a child at the hands of another child. Up-and-coming lawyers nationwide will take a special interest in the case, and discussions about it will take place all across the country. The events of the case, however, are completely fictional.

This is the case the Ithaca College Mock Trial Team, as well as mock-trial teams from around the country, are preparing to compete with this year.

Mock trials are simulations intended to teach participants about the legal system. Teams are given case packets with which they prepare for the trial. After simulating a real trial experience with both sides arguing their case, a decision will be made, usually by two scoring judges. Unlike real court, winning is determined on a point basis, so winning the case does not ensure winning that round of the competition.

Emily Francis, the president of the college’s mock-trial team, said the American Mock Trial Association usually writes a case that involves a homicide with strong arguments on both sides.

“It’s a really emotional case we can fight back and forth,” she said

The mock-trial season consists of two parts, with the fall serving as practice and the spring becoming more competitive. The team’s end goal is a high placement at the American Mock Trial Association’s regional tournament, which would qualify them to compete at the Opening Round Championship Series, the final step before the national championships.

The college’s club was founded during the 2011–12 school year, and has qualified for ORCS one time during its first season.

Greg Johnson, the current vice president of the mock-trial team, is the only current member of the team who was on the team that qualified for ORCS. He said qualifying for ORCS was an incredible accomplishment for a first-year team.

“The rest of the night [of ORCS], we just talked about how unbelievable this all was,” Johnson said. “We were a very small team, completely new to the scene, and we pulled off the win.”

Michael Whelan, communication studies professor and the moderator of the club, said of the about 25 teams that compete at regionals, only nine advance to ORCS.

Johnson said last year served as a time to rebuild the team, as all but three members were new to the team.

“Last year gave us the opportunity to see our teammates’ strengths and weaknesses and gave us a great foundation leading into this year,” he said. “I have no doubt that our team will be able to come together and give the other teams at regionals a run for their money, and I would not be surprised at all to return to ORCS for my final season.”

Taylor Reeves, a junior who has been on the team all three years of her time at the college, said she also thinks this year’s team has potential.

“We’ll put up a very good fight at regionals,” Reeves said. “Our team is very competitive, and I think we have a shot.”

“We’re hoping to give the new members as much courtroom time as possible,” Francis said.

The team held its first intersquad scrimmage Oct. 27. Francis said although it was the first time in the courtroom for many members of the team, it made her hopeful for the upcoming season.

“By the end of the scrimmage, I was very excited for the upcoming season,” she said. “They had that energy that we are looking for.”

Along with the competitive goals, Whelan said he also aims to help the individuals in the club become better lawyers.

“It would be great to go to ORCS, but I’m more about the development of the individual lawyers,” he said.

Along with the skills learned on the team, Francis said the team has had a profound impact on her time at the college.

“I love the idea I can do this for a living,” she said. “It’s the thing at Ithaca College I’m most passionate about. I’ve felt the most at home on this team.”