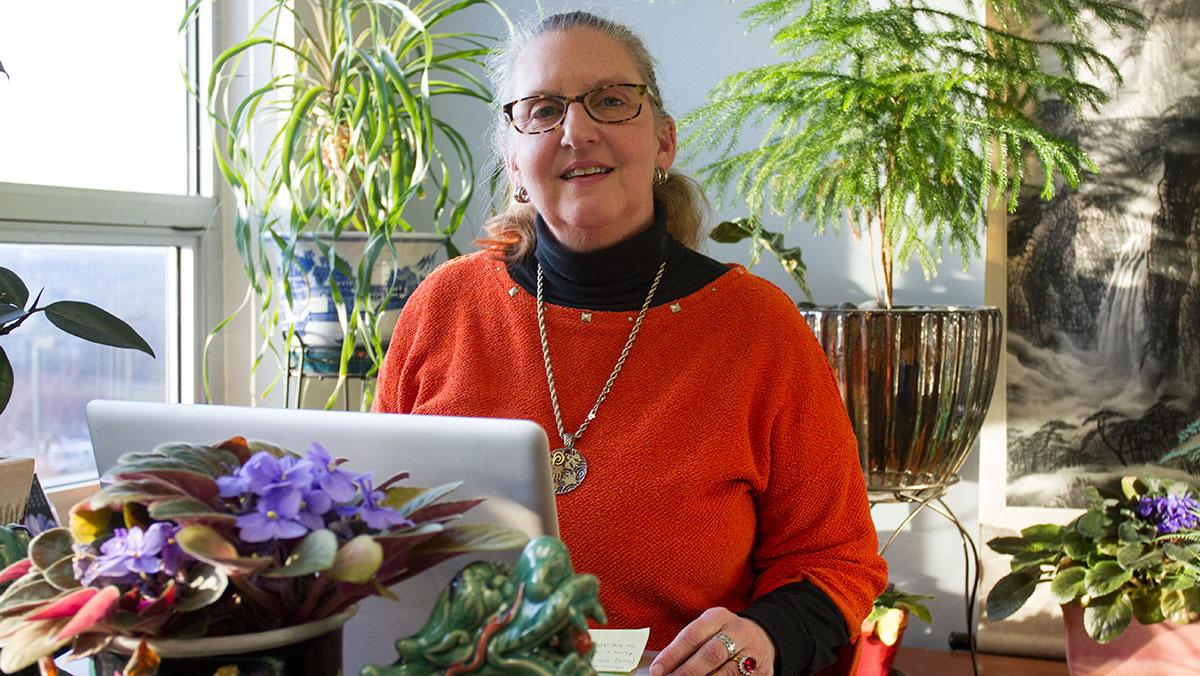 Amanda Den Hartog/The Ithacan
Virginia Mansfield-Richardson, associate dean of the Roy H. Park School of Communications, is in charge of the working group that drafted a policy regarding the use of drones on Ithaca College’s campus at its first meeting on Nov. 14.
By Max Denning — Staff Writer
Published: November 19, 2014

The college is preparing to draft a policy regarding the use of unmanned aerial systems, commonly referred to as drones, on campus.

On Nov. 14, a working group established to draft a policy regarding the use of drones on Ithaca College’s campus had its first meeting. The group is chaired by Virginia Mansfield-Richardson, associate dean of the Roy H. Park School of Communications.

Mansfield-Richardson said she was very happy with the individuals and with what they all brought to the group.

“I can’t praise the people that volunteer for this group enough,” Mansfield-Richardson said. “They bring in wonderful expertise, a really good mix of viewpoints and ideas.”

Kayiza said she thinks having a student in the drone work group is a significant addition.

“I definitely think it’s important to have student representation on these issues,” Kayiza said. “I think that a lot of students care about this policy, and I’m invested in helping the group add a student voice to the dialogue.”

Under the FAA Modernization and Reform Act of 2012, a model aircraft can weigh up to 55 pounds, can only be used for recreational use, must be within sight of the operator at all times, must be flown under 400 feet and can’t be flown near populated areas.

Mansfield-Richardson said one of the decisions made in the first meeting, which she described as the beginning of the fact-finding process, was that the policy will not allow drones to be flown on campus by individuals operating them off campus.

Mansfield-Richardson said the group’s goal is to draft a proposed drone policy as soon as possible and will be meeting at least every other week until a draft of the policy is complete.

As associate dean, Mansfield-Richardson said she often works with the Park Portable Equipment Center and Services. She said the college buys new equipment and software for PPECS every year and that unmanned aerial systems — the FAA’s official term for model aircraft — would potentially be added to PPECS if a policy is approved that allows them to be used on campus.

“We are constantly looking at new technology [for PPECS],” Mansfield-Richardson said. “UAS’s would be certainly something we look at, but the policy will have to be in place first.”

Once the working group drafts a policy, Slaght said, the legal affairs and risk management offices will then scrutinize the policy before it can be officially adopted by the college.

“First and foremost, the College needs to be in compliance with FAA regulations,” she said. “Many schools have placed the use of drones on hold until the FAA has released the much anticipated regulations.”

Mansfield-Richardson said she is excited by the opportunity to be one of the first few colleges with a drone policy.

“We feel that we might really be able to be a national leader on this,” Mansfield-Richardson said.