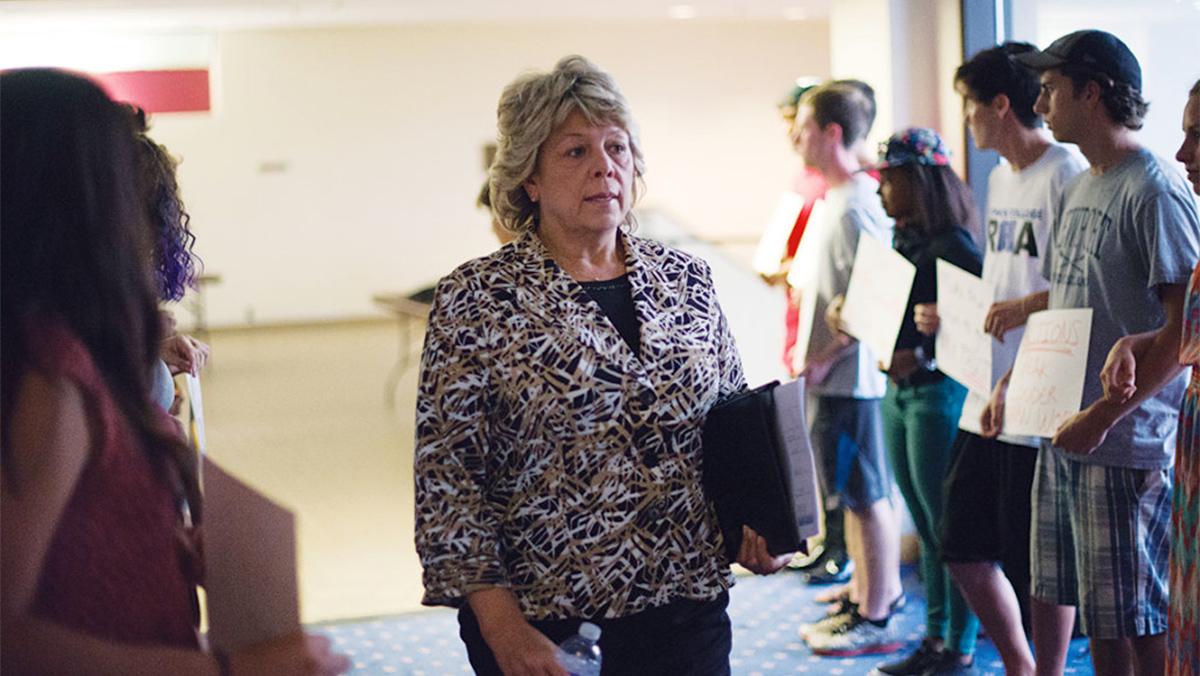 Tommy Battistelli/The Ithacan
Terri Stewart, director of Public Safety, walks into Emerson Suites before a meeting with RAs Sept. 2, 2015. Public Safety is beginning to implement initiatives that were spurred by this protest and allegations of racial aggression by Public Safety officers.
By Jack Sears — Contributing Writer
Published: September 21, 2016

The Ithaca College Office of Public Safety is heading into the implementation phase of some key initiatives promised last year, spurred by student protests regarding the racial climate on campus and a tense relationship between Public Safety personnel and students. Last fall, resident assistants protested alleged incidents of racial profiling and harassment by Public Safety officers against students of color.

Specifically, body cameras have been purchased and officer training completed, an external review firm has been hired, and a satellite office for Public Safety is under construction, which was a request from the Student Engagement Workgroup for Advancing Public Safety Diversity. Body cameras were planned for Fall 2016, and the external review was originally planned for last spring, according to the Action Items to Address Racism and Cultural Bias released last year.

Located in Egbert Hall in the Campus Center to the left of the information desk, the Public Safety Satellite Office is still under construction, and an exact opening date has not yet been confirmed.

The goal of the office is to increase police visibility on campus and to build relationships between the campus community and Public Safety officials, Public Safety Director Terri Stewart said.

The office will be staffed by a variety of Public Safety staff, from parking services to patrol to security officers. Initially, the office will be open for four-hour blocks on weekdays, since staffing logistics are still being organized, Stewart said.

The current Public Safety office is located on Farm Pond Road, just under a half mile from the planned satellite office. Stewart said the current location is a “detriment” to Public Safety engagement. The location in the Campus Center was pinpointed because of its high foot traffic and the central location.

The office will offer services such as taking reports and statements in a private room, and, if needed, dispatching appropriate resources from the main Public Safety office, according to a Sept. 9 announcement.

“I think the creation of the satellite office is a step in the right direction, in terms of creating more presence on the part of our Office of Public Safety staff members to be more available and integrated into the life of the campus community,” he said.

Marieme Foote, Student Government Association president, said she hopes that the office will alleviate the strained relation between students and Public Safety officials.

“There obviously is tension between police officers in many communities on campus, so having them be here and having us interact with them on a daily basis will hopefully ease some of those tensions,” she said.

The idea for the office was created by the Student Engagement Workgroup for Advancing Public Safety Diversity and was not one of President Tom Rochon’s diversity initiatives, Stewart said.

Stewart said the goal is for all patrol and command officers to wear body cameras by the end of the semester. However, an exact implementation date has not been determined as the Office of General Counsel, the college’s legal office, is reviewing procedures to make sure they comply with all federal and state laws.

Before the roll-out, there will be a forum for students to voice their concerns, Stewart said.

Stewart said the Office of Public Safety has agreed to a three-year contract with Taser, the maker of the new body-camera system that the college will be using, and officers have received training on the camera operations and software operations for storing video.

The administration is working with the United Government Security Officers of America, which represents some Public Safety personnel, to implement the cameras, Richardson said. Stewart said the union has been cooperative and that campus officers are looking forward to the implementation of the cameras.

The Residential Life–Office of Public Safety Workgroup, a panel of seven students and one adviser, will also have the opportunity to provide input in an open forum before implementation, Richardson said. A date for the forum has not been selected.

Foote said she knows the addition of body cameras will be a trial-and-error, and it is important that Public Safety be transparent about any issues it is encountering.

“I think it’s important to be more transparent … I think that more information and more options to provide input need to happen,” Foote said.

A third-party consulting firm, Margolis Healy, has been hired to review Public Safety’s overall operations. The review will begin in November, Stewart said.

To ensure impartiality, the firm will have three primary contacts: Foote, Richardson, and Brian Dickens, vice president for human resources.

The review will evaluate the following existing procedures: internal investigations and disciplinary processes; racial profiling; data collecting; use of force; vehicle, traffic and pedestrian stops; initiatives and formal goals related to diversity, inclusion and engagement; and hiring, recruitment, selection and retention policies and practices, according to the announcement.

Stewart said she cannot provide many details on the review, as she is part of the department that will be reviewed. Dickens could not be reached for comment.

Once completed, the firm will consult with administrators and identify issues that were presented, along with recurring themes the firm noticed among these issues. A final decision as to how the review results will be released has not been determined.

“I expect in the name of transparency that the report findings will be shared with the campus community,” Richardson said.

He said the external review will help improve the operations of Public Safety and relieve the tension that members of the community have with Public Safety.

“All of these initiatives are steps to create more positive interactions, provide a context for listening, and for conversing; and hopefully leading to institutional change that is in the best interest of the campus community,” Richardson said.

Foote said this year is crucial for addressing students concerns with Public Safety.

“It’s an exciting, really challenging time,” Foote said. “This will definitely be a very key year on building the foundations of what the school will look like and what the values are of this community.”