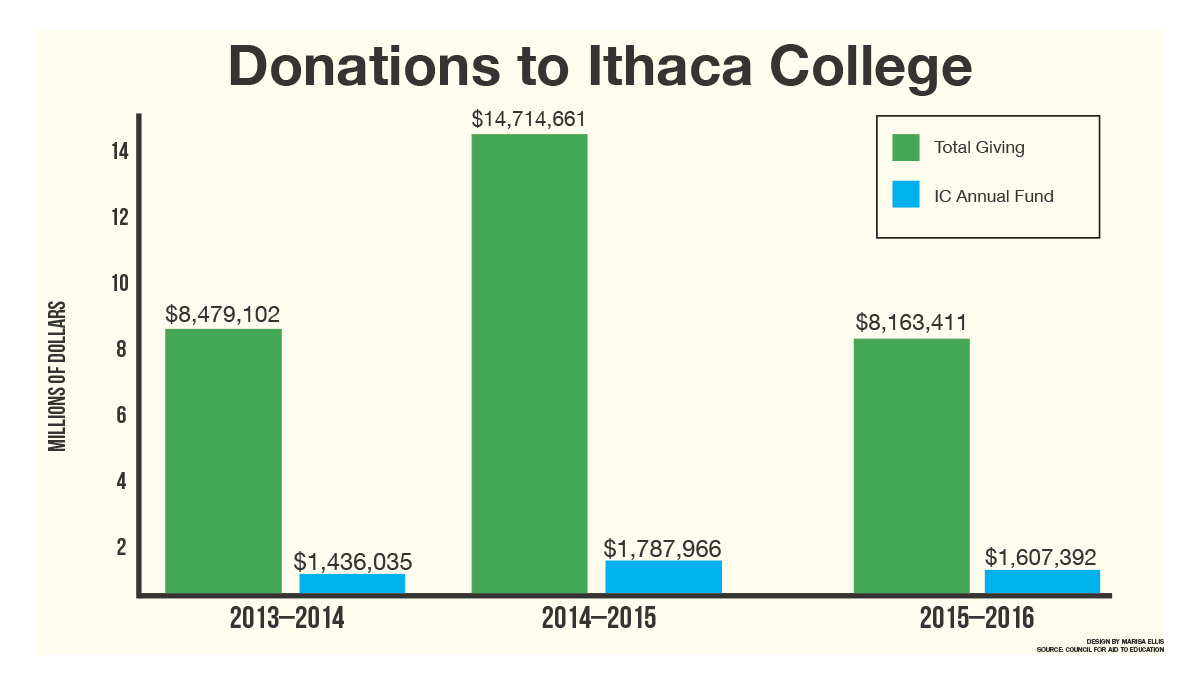 Ithaca College saw a decrease in both donations and the IC Annual Fund for the fiscal year 2015–16, which the college is attributing to the transition period between President Tom Rochon’s stepping down and the selection of the new president. However, donations to the college have been increasing this fiscal year, Chris Biehn, vice president for Institutional Advancement and Communication, said.

Overall, colleges and universities in the U.S. saw a 1.7 percent increase in charitable donations for the 2015–16 year, according to the VSE survey. Of the top 20 colleges that raised the most money during 2015–16, Cornell University ranked sixth, with the total amount fundraised at $588.26 million, according to the Council for Aid to Education.

“We need to build philanthropy at Ithaca College — it’s the margin of excellence that other colleges have achieved,” Biehn said.

He said he thinks one factor in this drop was the early retirement announcement from Rochon following student protests during Fall 2015 criticizing how the administration handled racially insensitive incidents. Many donors said they wanted to wait to see what the new presidential search brought to make sure the new selection still aligned with their priorities before donating, Biehn said.

The college needs greater philanthropy to maintain affordability and accessibility, to maintain and improve faculty salaries, and to provide extracurricular, athletic and academic programs, Biehn said. He said decreases in donations also limit opportunities that can be given to students. Even though these donations did take a big dip in the fiscal year 2015–16, Biehn said the decrease was not large enough to cause reactive cuts.

Tom Swensen, professor and chair in the Department of Exercise and Sport Sciences, said he was disappointed with the decrease in donations but also understanding of the situation. He said the unrest on campus last year, and the presidential search taking longer than expected, took a toll on the donations. However, Swensen said he thinks the college lacks a culture of giving from alumni, to begin with.

“If we had a better culture of giving back to the institution, we would be better able to meet the financial needs of our incoming students — it wouldn’t just come out of tuition revenue,” Swensen said.

Dominick Recckio ’16 said he thinks a reason for the decreased donations in 2015-16 was the negative press the college received when students publicly criticized Rochon during Fall 2015.

“In a time where diversity is central to so many conversations going on, for alumni to see that Ithaca College was not handling those situations particularly well — I think that is probably a direct reason that year was not up to par on donations,” Recckio said.

On alumni Facebook group pages, individuals were advocating for others to withhold donations after these incidents occurred, he said.

Steve Savage, associate vice president of Institutional Advancement and Communication, said the college has historically struggled with consistent engagement from alumni. His office has been trying to improve interactions with students on campus and parents to help them understand the importance of philanthropy to the college, he said.

For this upcoming fiscal year, the college has seen a rise in donations again. Donor retention was at 51 percent during the 2015–16 fiscal year but is back up to nearly 60 percent this year, and the IC Annual Fund will be above $1.6 million again, Biehn said. Donations increased with the announcement of the new college president, he said.

Marieme Foote, president of the Student Governance Council, said the increase in funds after the presidential announcement makes sense since alumni are invested in and affected by the colleges’ reputation.

To ensure that donations keep increasing, Biehn said road campaigns with prospective students — campaigns held around the country to inform potential students and parents of the college — need to continue. Biehn said alumni events need to increase to get alumni involved as well. The Division of Institutional Advancement and Communication conducted a survey and found that people who attended college-related events were 50 percent more likely to make a philanthropic gift to the college, Biehn said.

“The more time we have alumni spending together, especially seeing faculty and staff they know, the more passionate they are going to be about the college,” he said.

The college is also planning its second Giving Day, a daylong event where a donation goal is set for alumni to give to the IC Annual Fund. Biehn said the event will take place during the winter, though a donation goal has not yet been set.

Foote said as a student, she has had many opportunities that have been made possible through alumni engagement. She said for her, it is important to see strong leadership in alumni in order to create opportunities for students.

“With the new president and with … Ithaca College, I’m really invested,” she said. “I’m invested in the culture here, I’m invested with the climate and with the leadership, so I will definitely donate.”

Recckio said once he graduated he wanted to be more involved with the college so he decided to donate monthly to increase his involvement. Recckio also said after he attended the presidential announcement of Shirley Collado, he immediately wrote a check for $100 to the college and encouraged his peers to do the same.

“I donated and then encouraged my peers to donate more to affirm to the college that they made the right decision,” Recckio said.