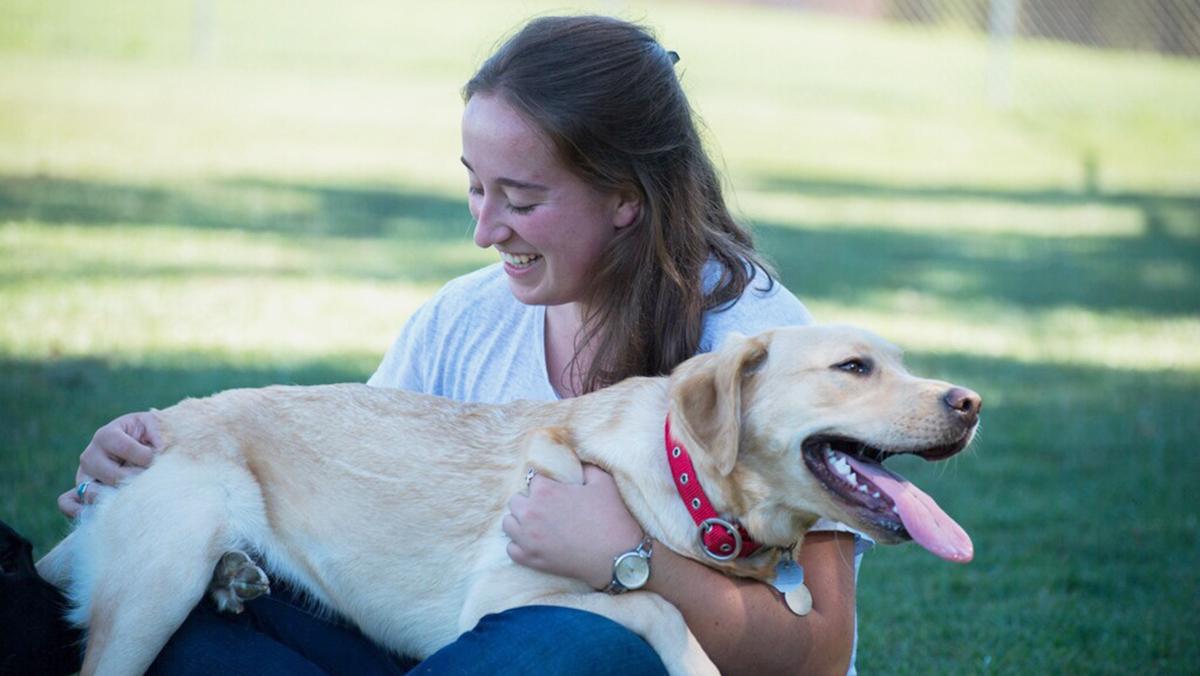 Courtesy of Eric Mitchell
Melissa Potter has been training guide dogs through Guiding Eyes for The Blind since she was a freshman. Now, she is vice president of the club.
By Madeline Veneziano — Staff Writer
Published: November 28, 2016

In a large, gated field behind Emerson Hall, labrador retrievers Eden and Aura enjoy some playtime by running through the grass — a short break from training by students like junior Melissa Potter.

Potter, vice president of the club Guiding Eyes for the Blind at Ithaca College, said she has been involved with the club since the fall of her freshman year. GEB is a national nonprofit organization that trains service dogs for blind and visually impaired people. She said a teacher’s assistant in her psychology class initially told her about the club, and her love for dogs was one of the reasons she decided to get involved.

After meeting certain requirements, such as attending enough classes and workshops, a club member is invited to be a certified dog handler and can walk and spend time alone with the dogs. Potter said it was  a lot of effort to attend classes and constantly check her emails so she could eventually become a handler.

“I’m always willing to make time and budget my life around my time with the dogs,” she said.

Attending enough classes also allows participants to become sitters or raisers, Potter said. To be a sitter, a person must be an active general-body member and attend two Monday night classes per month, according to the club’s constitution. Raisers must have a sitter status for at least two blocks, gain approval from the GEB executive board, region manager and region coordinator; and attend all meetings. Raisers get their dogs when they are around eight weeks old and live with the dogs until they are 14–18 months. If raisers cannot bring their dog to class or work, they can ask a sitter to watch the dog for a period. Potter works as a sitter and said she spends about 10 hours a week with the dogs in the program.

Last semester, Potter said, she went on a trip with some other club members to the national Guiding Eyes for the Blind training school in Patterson, New York, to see some of the guide dogs graduate from the program and be paired with a recipient. She said experiencing this moment was emotional.

“It was kind of amazing to see how confident people were now that they had another means of moving through the world,” she said.

Senior Tim Conners received a guide dog that went through the GEB program at a different location in Auigust 2015. When he was 15, Conners became blind from leukemia that relapsed in his optic nerves. He said the GEB training program provided him not only a companion — his dog, Lang — but also a major confidence boost.

“He is a great friend, and people are definitely more willing, it seems, to strike up conversations with me now that I have him,” Conners said.

Senior Lauren Reightler, president of the college’s chapter of GEB, described Potter as understanding and dedicated to what she is passionate about. She said Potter is always brainstorming new ideas and suggesting new ways for the GEB executive board to bond.

“She’s always bringing up new opinions and different things that we can get involved with,” Reightler said. “That definitely helps our club because we have a wider range of things to do.”

Christine Johnson, assistant professor in the Department of Occupational Therapy and faculty adviser for GEB, said in an email that Potter is always willing to put 100 percent effort into any task for the club.

“Melissa positively contributes to the IC communication by setting an example on a daily basis of an active, engaged, caring college student that many students strive to be,” Johnson wrote.

Potter said she has cut back her participation in other organizations and clubs to prioritize GEB. However, she said the experience is worthwhile.

“I don’t have as much free time as I used to, but I think that putting my efforts towards something that matters and towards helping other people is what I like the most about it,” she said.

Sophomore Jack Ficcardi, a fellow club member, said Potter always has a solution to any problem. He said that during a recent Halloween meet-and-greet where students could interact with the guide dogs, one of the dogs, Quincy, was giving his raiser, junior Zach Thomas, a hard time. Ficcardi said Potter volunteered to give Thomas a break and take Quincy outside for him.

“It showed how compassionate she was about the people and the dogs in the club,” he said.

Thomas said Potter is thoughtful and caring, especially toward him and Quincy.

“Sometimes he [Quincy] can get to me more than he should, and I get stressed out, and she’ll be the one that will calm me down and say, ‘He’s doing better than you think, he’s going good.’” he said. “So she’ll be that person that reassures me everything’s okay.”

Potter said she is glad GEB gives her the opportunity to use her time for something that will benefit others.

“In the long term, you’re giving a blind person sight, which is an incredible gift, and I feel really lucky to be a part of something so important,” she said.