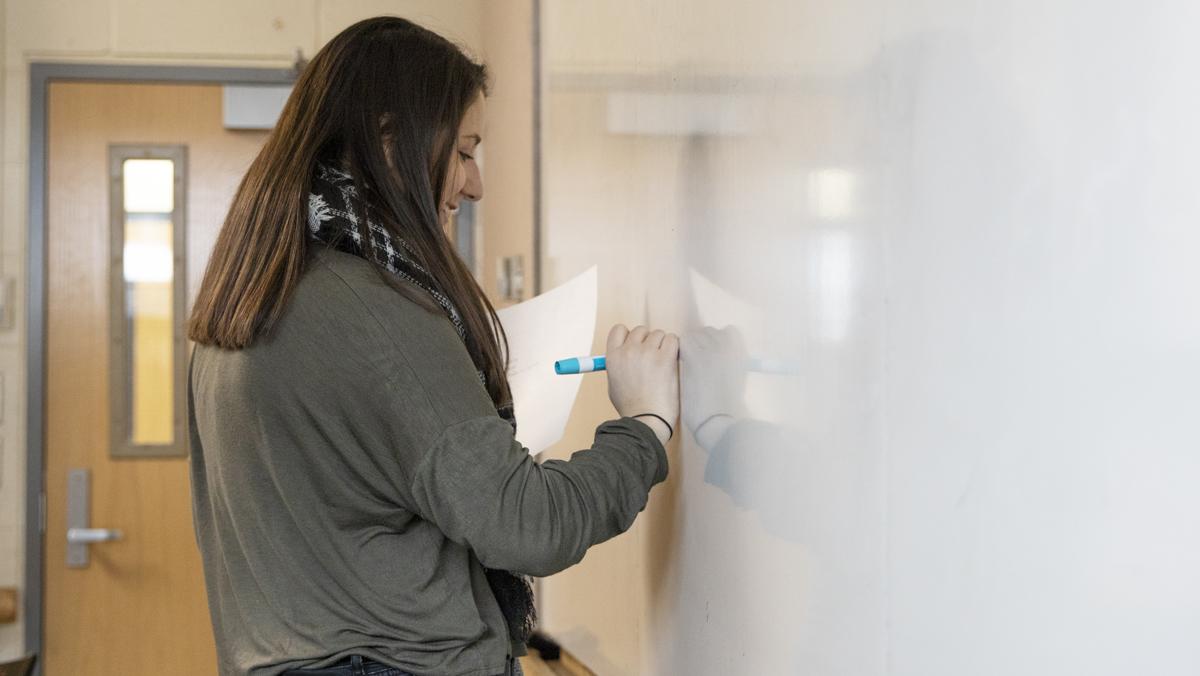 Connor Lange/The Ithacan
Sophomore Alyssa Meta writes on the board while volunteering at South Hill Elementary School. She is one of approximately 15 Ithaca College students participating in the South Hill Mentorship Program.
By Ashley Stalnecker — Staff Writer
Published: March 19, 2019

Making a difference can start on an empty basketball court.

On the South Hill Elementary School basketball court, fifth–grader Sir Ntombela finds the comfort and attention he needs from Ithaca College sophomore Megan Yawman. The two play a quick game of basketball during their time together. Other days, they simply talk, do some homework or bond through a variety of other activities. Yawman said the one hour she spends with Ntombela is one of the best parts of her week.

Yawman is one of many students at the college who mentor children at South Hill Elementary School. The partnership between South Hill and the college is part of The New York State Mentoring Program run out of Governor Andrew Cuomo’s office. Matilda Cuomo, First Lady of New York state from 1983 to 94, initiated the program while her husband, Mario Cuomo, was Governor of New York state. Her son, Andrew Cuomo, reinstated the mentorship program in 2015.

Father Carsten P. Martensen, former director of campus ministry at the college, first entertained the idea of bringing The New York State Mentoring Program to the college when he met Matilda Cuomo at an event a little over a year ago. Martensen passed on information to David Harker, director of the Center for Civic Engagement, who started the program in Spring 2018.

The South Hill Mentorship Program connects 15 college students with fourth– or fifth–grade students at South Hill Elementary School, Harker said. Harker said the Center for Civic Engagement started the program in Spring 2018 to help elementary students transition from elementary to middle school. Since the program started last year, Harker said that it has recruited more mentors. Having more college–student mentors has allowed the program to expand to fourth– and fifth–graders after previously helping only fourth–grade students. Because of this, mentors like Yawman now have two years rather than one to connect and grow with their mentees.

“It’s hopefully the start of a two-year model to continue to grow that relationship even stronger and reach more students with it,” Harker said.

Harker said he is involved in getting programs like the South Hill Mentorship Program off the ground and in connecting college students with the program.

Yawman and her mentee were paired together because Ntombela has several older brothers and could use a female role model in his life. She started mentoring him in Spring 2018 and has continued mentoring him this year as he transitions into his fifth year of elementary school.

“My favorite part is that, for the whole spring semester, I’m going to get to work with the same kid, and I’m not starting from scratch,” Yawman said.

Harker said that the elementary students are usually excited when the college students visit and that elementary school attendance increases on those days.

During the training, Yawman said that the liaison described the types of questions a mentor can and cannot ask their mentees, red flag questions and warning signs to look for. For example, Yawman said she is required to tell a teacher at the school if a student mentions any abusive or concerning behavior at home.

“We’re there for them to trust us, but we also have to know when there’s a point where we have to report something,” Yawman said.

Christine Barley, teacher at South Hill Elementary, said the South Hill students who are members of the program are not necessarily at-risk but could benefit from a little more attention and excitement about their educations. For example, Harker said one mentee has six brothers and sisters, which can make it difficult for him to get one-on-one attention at home.

Junior Katja Krieger serves as the coordinator for the program to facilitate communication between the elementary school and the college.

“The mentors are supposed to give them advice on what it’s like to be transitioning into middle school,” Krieger said. “At the same time, they’re also supposed to work as role models for what it’s like being a college student and having certain goals in mind.”

Krieger said the college students are people the elementary students can look up to and identify with. Yawman said that while she acts as more of a friend than an authority figure, she still has the ability to stop her mentee from misbehaving.

“The kids get really excited because I feel like they also open up with us a lot, and they feel comfortable because we’re not teachers, we’re not parents,” Yawman said. “We can have fun of them but also get serious with them when we need to.”

Krieger said this program is important to her because she is passionate about education policy.

Because the program focuses more on the connection between the college and elementary students, the pairing is based mainly on common interests.

“It’s not an academic program,” Harker said. “It’s really about having someone else to connect with.”

Krieger said she likes that this program gives her a chance to get off campus and become more involved in the Ithaca community.

“It’s definitely made me feel closer to the Ithaca community,” Krieger said. “I feel like, a lot of times, going to IC and being up on the hill, you feel kind of isolated from the rest of the Ithaca community, but being able to work with these kids has been really great and has really showed me the beauty of the people who live in Ithaca.”

While Krieger is studying abroad in Spring 2019, junior Breana Nieves Vergara has taken over as Ithaca City School liaison. Krieger said she hopes to work with Nieves Vergara when she returns in Fall 2019 to expand to other schools, like New Roots Charter School.

The Center for Civic Engagement focuses on more of the long-term and curricular side of engagement rather than short-term, co-curricular involvement. Harker said this project in particular is a unique co-curricular because it is not connected with a course but it still applies as civic engagement connected to other programs the office is involved in.

“I think one of the biggest things is, we’re trying to make this program more of a presence on campus,” Yawman said. “It’s a very rewarding experience that’s just an hour a week.”