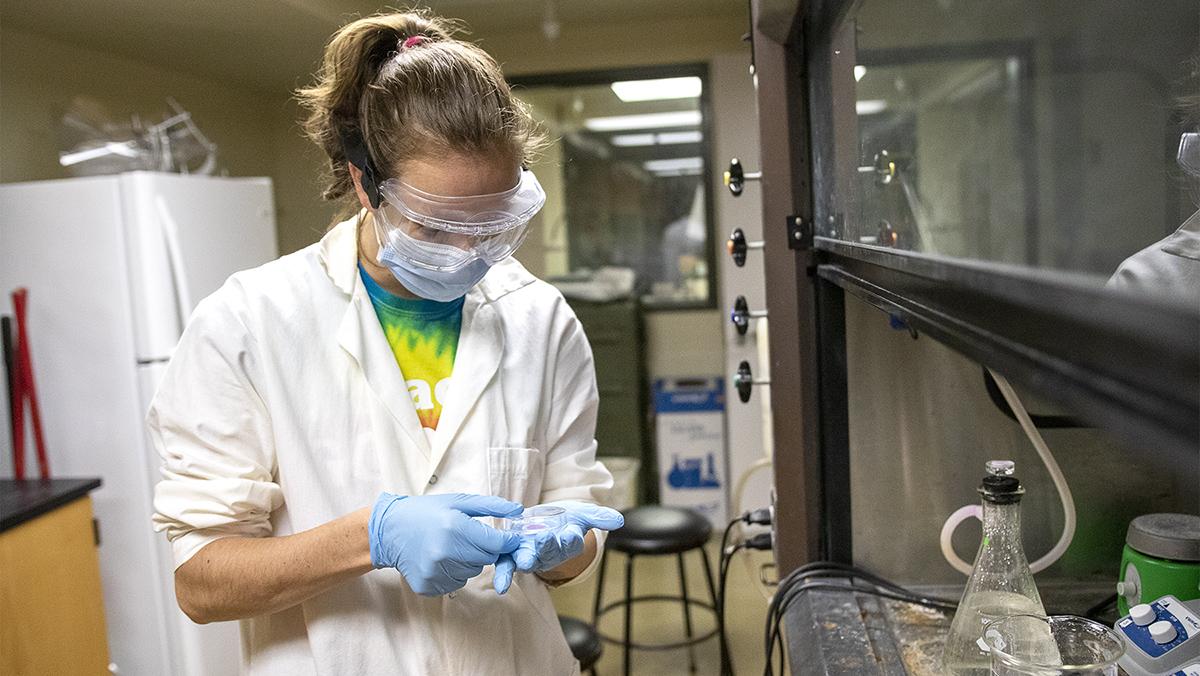 Kalysta Donaghy-Robinson/The Ithacan
According to a National Geographic encyclopedia entry, microplastics are plastic pieces that are less than 5 millimeters in diameter that degrade from larger plastics. Primary microplastics come from microfibers from clothing and textiles, and secondary microplastics come from particles that break down from larger, often single-use plastics like bags or water bottles. The entry states that microplastic particles are often so small that they easily pass through water filtration systems and end up in waterways and the ocean.
By Caroline Grass — Staff Writer
Published: November 11, 2021

Cayuga Lake is the longest of the 11 Finger Lakes, stretching 40 miles from Ithaca to Seneca Falls, New York, and is home to thousands of plants and animals. However, the IC Toxicology Lab estimates that the lake has 100,000,000 microplastic particles in it, which can harm aquatic life and people.

Susan Allen, professor in the Ithaca College Department of Environmental Studies and Science, is the professor and principal investigator for the IC Toxicology Lab. The lab collaborates with the Ithaca Area Wastewater Treatment Facility and researches microplastics in Cayuga Lake. In 2018, Allen was awarded a $40,000, two-year grant from the Park Foundation, a charity organization started by Roy H. Park, that promotes education in specific areas of interest to the Park family through grant making. During this time, the lab found how many microplastics were in Cayuga Lake. Allen said the lab has been awarded the same grant for another two years — until September 2022 — to research the sources of where the microplastics are coming from.

The National Geographic entry said the problem is that plastic does not break down into harmless molecules and takes hundreds or thousands of years to decompose. The entry also says microplastics have been found in organisms as small as plankton and as large as whales, in addition to being found in seafood and drinking water.

Allen said there are multiple reasons why microplastics are a concern for organisms. She said that Bisphenol A (BPA) is a harmful chemical that can be leached from plastic and that plastic can act as a vehicle for other toxic pollutants that can be absorbed into an organism’s tissues.

“Our research suggests that microplastics are everywhere,” Allen said. “In other words, there’s no air or rain or snow samples that we collect that we don’t find microplastics.”

Allen said the study of microplastics is still an emerging field and hasn’t been studied very much, so it is hard to see trends and confirm data with other research.

“We didn’t really know the extent of contamination until fairly recently,” Allen said. “We didn’t know that they’re everywhere … until about the last three to five years.”

Senior Jake Espenscheid said he is the lab intern at the IC Toxicology Lab and he said there is not much research into the effects of microplastics on behaviors of organisms, but there is some research on behavior changes of fish that eat microplastics. Like Allen, he also said that when animals eat plastic, pollutants can be absorbed into the tissues of organisms.

“If [the fish] eat a bunch of microplastics, they’ll think that they’re full,” Espenscheid said. “But it’s not getting any nutrients. It’s hard to make sweeping generalizations, just because there’s not a lot of research that’s been done. But it all points to the idea that yeah, ingesting plastic is actually very bad.”

In an article written by Scientific American, there are physical and chemical effects in organisms that eat the plastic particles. Microplastics can damage organisms’ organs and hazardous chemicals like BPA can hurt immune function and reproduction leading to fewer offspring and shorter life spans of animals.

Senior Megan Plummer said she has been working as a research assistant in the IC Toxicology Lab since Spring 2020 and explained how the lab is collecting samples this academic year. She said there are four types of samples: rain, snow, active and passive air. The active air sample comes from a vacuum that pushes air through a filter and the passive one comes from large pots that are put out in the natural lands and local waterways like Six Mile Creek.

Plummer said the researchers take the samples, put them in water and kill off any organic material with a strong hydrogen peroxide solution. Then the samples are dyed with a stain called “Nile red” and the water is filtered out.

“[The Nile red] turns all the plastics red, but what’s important about that is it fluoresces under UV light,” Plummer said. “And then we’ll, like, look at it under a microscope … so we can see all the things that are fluorescing or the little plastics, and then we’ll count them [with] like a 30-page long step list of how we’re counting microplastics.”

Espenscheid said there are four students working in the lab, and next semester, one or two more students could potentially be added. He said this year the lab’s goal is to take 20 samples from each type of collection method — rain, snow, active and passive air — so the student researchers can try and compare the counts from each sample which can be challenging.

“I feel like we do have a ton of samples, but when you break them down to try and compare them, and make some big statement, it’s kind of difficult because there’s not so many that you can confidently say this is a trend,” Espenscheid said. “But mostly, it seems that rain and snow are really big factors in introducing microplastics into the lake.”

The IC Toxicology Lab plans to present its data when their research is complete, and Espenscheid said he hopes to educate the campus community and Ithaca community about microplastics to highlight the importance of protecting the lake. Plummer said in years past, the lab has presented its findings at the annual Whalen Symposium, an event held in the Spring semester where Ithaca College students present original research or creative work. The IC Toxicology Lab has a website and created an instagram (@ic_toxlab) during Fall 2021 to talk about where microplastics come from and share the research the lab is doing.

“I think a big part of the current project has been about trying to communicate to people in the area,” Espensheid said. “It could be pretty important.”

New York state has banned the use of all plastic carryout bags from businesses, and stores in Ithaca charge a 5-cent fee for paper bags. Allen said this is one way that government actions can limit single-use plastic to in turn limit the amount of plastic used. She added that it is very hard to regulate and create policies about plastic. The college plans to be single-use plastic free by 2025. The college also stopped using plastic bags in the campus store following the state ban.

“It’s not like all the plastics are coming from one specific industry that we could clamp down on,” Allen said. “We could make less plastics, but that will be a long time before we see the effects of that.”

Plummer said since microplastics don’t decompose, getting rid of what already exists is challenging. She said pledging to reduce, reuse and recycle to curb plastic consumption to make sure that plastic that is created doesn’t end up in waterways is important.

“So our big thing is just to try to limit the amount of pollution that is continuously going into the environment,” Plummer said. “We’re so dependent on plastic as a society to do everything, everything has plastic in it. Trying to move away from plastic-based products is probably going to be our best bet, but there’s just so much of it.”