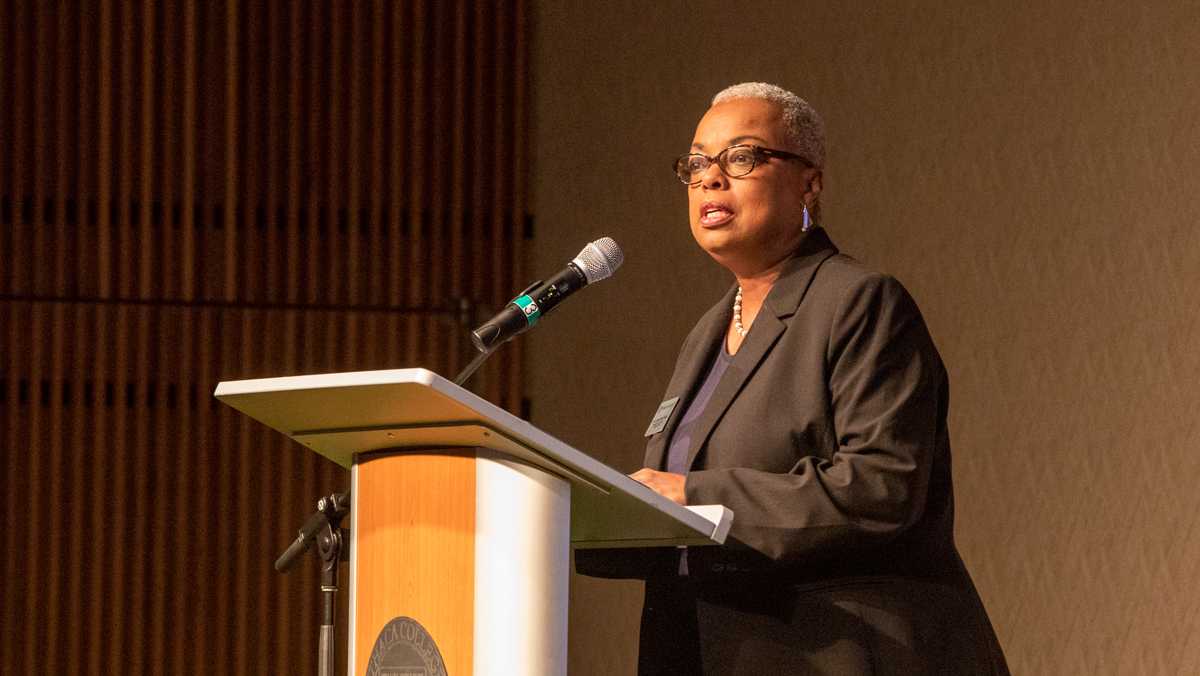 Julia Cherruault/The Ithacan
The initiatives were also sponsored by Wade Pickren, director of the Center for Faculty Excellence. Pickren said the Chair’s Academy would likely entail meetings among all the department chairs on campus.
By Ryan King — Staff Writer
Published: September 12, 2018

La Jerne Cornish, newly appointed provost and senior vice president of academic affairs, recently announced two initiatives that she said will aim to elevate department chairs and showcase some of the accomplishments of professors on campus.

The Chair’s Academy is intended to make department chair responsibilities more clear, giving department chairs workshops to help them better run their departments and potentially make revisions to the compensation structure. The Provost Colloquium Series will serve as a platform for professors who went on sabbatical, or currently serve as Dana professors, to present their research and accomplishments to the campus community.

The initiatives were also sponsored by Wade Pickren, director of the Center for Faculty Excellence. Pickren said the Chair’s Academy would likely entail meetings among all the department chairs on campus. Some of those meetings would likely include presentations from experts on campus to aid department chairs in certain responsibilities that they might not have a strong background in, such as managing department finances, he said.

Tom Swensen, Faculty Council chair and professor and chair of the Department of Exercise and Sport Sciences, said that newly elected department chairs often go into the position with little to no training.

“Chairs are largely unsupported,” Swensen said. “You kind of feel like you are being thrown at the wolves in a way. This would be an opportunity for chairs to mentor other chairs and begin to tackle some of the issues that hamper most of the academic units.”

A study funded by the University Council for Educational Administration concluded that 67 percent of department chairs in colleges and universities across the country do not receive formal training. Two-thirds of department chairs that received some training felt their training did not properly prepare them.

Cornish, who served as the department chair of education for four years at Goucher College, echoed this concern. She said she is planning to spend this semester working with Pickren to get input from department chairs and is hoping to launch the program next semester.

In terms of possible revisions to the compensation structure, Cornish said she has some specifics in mind but does not want to make them public just yet because she needs the board of trustees’ approval in order for them to occur.

Cornish said she also wishes she could change the length of the terms that department chairs serve. The possible term revision is not part of this latest set of initiatives, but Cornish said she is interested in it and would need to discuss the issue with faculty.

Currently, department chairs serve three-year terms, she said. Cornish said she would like to change that to five-year terms with elections of the new chair during the end of the fourth year. She said this would give newly elected chairs a year to work alongside outgoing department chairs and learn the responsibilities.

“I can’t dictate what the terms would be, but in an ideal world, if I could choose, it would be a five-year term,” she said. “Currently it’s a three-year term. And if you think about it, you don’t know how to do something until year three.”

The second initiative Cornish is implementing is the Provost Colloquium Series, in which Dana professors and professors returning from sabbatical will present research and other projects they worked on to the campus community.

Pickren said that the college had provost colloquiums in the past but said they stopped a few years ago. He said most of those colloquiums generally featured just one speaker, whereas these colloquiums will feature several speakers.

“I think over time, you kind of have to rethink and re-envision what you are doing,” he said. “I think it’ll be fun.”

Cornish said Goucher College had provost colloquiums and feels it was a nice way to highlight the accomplishments of professors on campus.

“We will always highlight the work of our faculty,” she said. “They are doing such tremendous work, and we don’t get a chance to talk about it. And so I think this is an opportunity for colleagues to hear about what everyone else is doing.”

Cornish said 37 professors who went on sabbatical over the past year and five Dana professors on campus have been invited to attend. She also said provost colloquiums will occur several times each semester.

The first provost colloquium of this semester will take place Sept. 20. From that point on, the colloquiums will generally occur on the second Monday and fourth Tuesday of every month.