The sound of machinery and the tinkling of glass cut through the air at the site of the 1st Street Mosaic Project, where six Ithaca College freshmen and two student leaders joined community members to work on the art initiative on Aug. 22.

Some students worked inside a building belonging to the city and broke glass pieces, while others were outside putting together the mosaic itself. Freshman Christian Conyers said he was having fun improving the site.

“We were cutting the glass with glass cutters and we had to break it into pieces,” he said. “We’re going to put it around a figure outside on the mosaic and just make it look nice.” 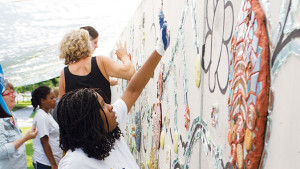 This project is one example of what 234 total participants and student leaders were able to do at this year’s Jumpstart program.

Every year, around 200 incoming freshmen arrive early to the college to participate in Jumpstart, where four different programs are specially designed to ease their transition: Community Plunge; Experience Connections by Heading Outdoors; Lead-In; and the Gardening, Recycling, Eating, Enjoying Nature Tour.

The students are able to show their preference for a specific program, which Theresa Radley, assistant director of student leadership and involvement in the Office of Student Engagement and Multicultural Affairs, said will result in them being more engaged.

Radley said although there are other colleges with pre-orientation programs, the college’s Jumpstart is distinctive because of the focus on the community.

“Most schools are very centralized,” Radley said. “We have these four separate programs, and they are unique to our area. They are benefitting from some of the resources we have in our area.”

The 1st Street Mosaic Project was part of the Community Plunge program, in which participants spent Aug. 22 and Aug. 23 doing community service in the Ithaca area, including projects like volunteering at schools, libraries and organizations around the area such as the ReUse Center and the Ithaca Waldorf School.

The finished mosaic will feature colorful designs and reflective glass pieces on a 150–foot-long  wall of the Department of Public Works on the 600 block of 1st Street in Ithaca’s Northside Neighborhood, according to the project’s website.

Don Austin, assistant director for community service and leadership development, has been involved with the Jumpstart program for four years and said he thinks a program like Jumpstart is valuable to incoming students because of the opportunity to make connections.

“The point of Jumpstart is to connect students to the campus and to the community,” Austin said. “It’s an opportunity for them to get to meet some of the upperclass students here at IC and hear from them what the college experience is like.”

Senior Monica McNicholas, who was a GREEN Tour student leader, said she has four years of experience with the program: one as a participant and three as a student leader.

“It is a great way to meet people who share the same interests and passions,” McNicholas said. “Jumpstart also helps students learn about the Ithaca community off campus and travel to places they may have otherwise missed out on.”

Participants in the GREEN Tour explored sustainability issues in Ithaca. McNicholas said the groups traveled all over Ithaca and the surrounding area, including Cayuga Lake, the Great Gully Nature Preserve, Taughannock Falls and Stewart Park. They also visited farms, the gorges and the farmers market.

Radley said the nature of the programs — taking students beyond the campus — offers an experience unlike any other.

“It’s that experience,” she said. “You’re out camping for ECHO — when are you going to go camping in the woods with a group of students you don’t know … You are getting to experience these benefits of what the area has to offer.”

Junior Megan Hooley, a student leader for ECHO and former participant, said ECHO participants took to the outdoors to learn about their carbon footprints and to reflect on how to lead a less harmful lifestyle.

“We chose our meals, packed the night before, hiked with all of our gear to the site, fell in the mud, made jokes and sang songs, learned about Leave No Trace principles, performed skits, cooked for ourselves, “sumped” a lot of nasty leftover food from dishes, slept under the stars all together and had an all-around amazing adventure,” she said.

ECHO participants also practiced their construction skills by building, using and then tearing down a maze made from natural materials in the area, she said.

Along with the 178 participants, there were also 56 student leaders assisting with the Jumpstart process. Austin said several of these students had participated in Jumpstart during their first year, although prior experience is not a requirement.

“Many students who serve as leaders have been Jumpstart participants in the past, but that’s just because of their exposure to the program,” he said.

Radley said in her five years helping lead the program, she has seen an increasing number of participants applying to be leaders, and about half of the student leaders this year were returning leaders.

Freshmen Lead-In members and their student leaders could be seen scaling wooden poles and ziplining through the trees on Aug. 22 at the Hoffman Challenge Course on Mount Pleasant. The students worked with trained course workers to navigate a series of challenges, such as ziplining, climbing and other rope course activities, to practice teamwork and supportive interactions.

In one area of the course, students attempted to scale a pole and then leap from the top. Group members supported them by either having them on the belay team, which kept them from falling down, or through calls of encouragement. Another area featured a rock climbing wall followed by a zipline. Throughout the course, participants had to support each other both physically and emotionally.

“I figured that getting here early and knowing other people would make it easier,” he said. “Just getting here, within 20 minutes I had made two friends on my floor.”

Concluding the weekend of community integration and team building was a closing event on the evening of Aug. 23 in Emerson Suites, featuring a “Salsa Magic” program and multiple opportunities to reflect on students’ experiences during the weekend.

Hooley said she had a wonderful experience with ECHO her first year and wanted to share that with the new freshmen.

“Watching the first years connect, solve problems and share stories together is the most rewarding experience of all,” she said.