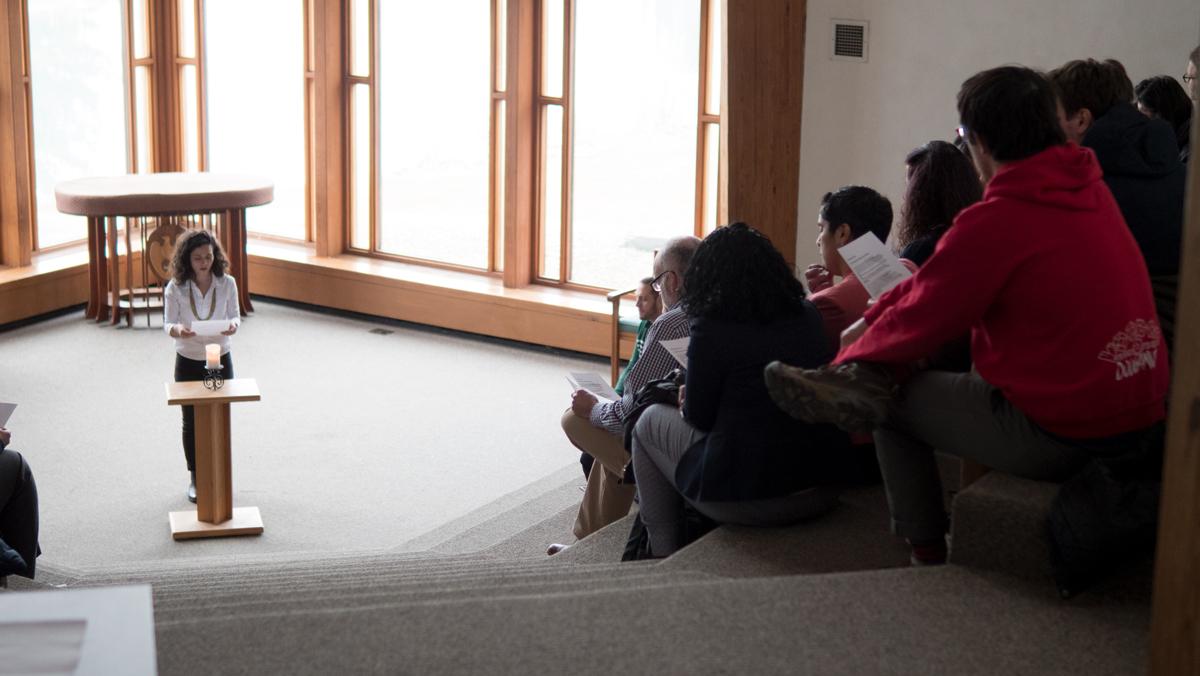 Elias Olsen/The Ithacan
Members of the Ithaca College community gathered in the Muller Chapel on April 9 in honor of Steven Russo, assistant professor in the Department of Chemistry, who passed away April 7 unexpectedly at his home.
By Meredith Burke — Staff Writer
Published: April 11, 2018

Lauren Goldberg, executive director of Ithaca College Hillel, led approximately 40 people in a reading of the lines “As long as we live, they too will live, for they are now a part of us/ As we remember them” at a service held on April 9 in honor of Steven Russo, assistant professor in the Department of Chemistry, who passed away April 7 unexpectedly at his home.

This poem, “We Remember Them” by Sylvan Kamens and Rabbi Jack Riemer, was read at the beginning of the service. The gathering was organized in a collaborative effort by the religious communities at the college and was hosted by Goldberg and Rev. James Touchton, chaplain of the college’s Protestant Community.

Mike Haaf, professor in the Department of Chemistry, said Russo defined himself as a teacher, working at various institutions for over three decades.

Russo was a great colleague and shared his knowledge with both students and fellow teachers, Haaf said. He said that although he is saddened at Russo’s passing, he feels lucky to have had the opportunity to work with him.

“I remember when he interviewed 10 years ago. Watching his presentation, I learned a lot from it and continued to learn from him over the 10 years he was at Ithaca. He was a wonderful colleague, and I’m very sad about not seeing him in the halls anymore, but I also feel lucky that I had the chance to work with him,” Haaf said.

Jamie Ellis, assistant professor of the Department of Chemistry, said Russo was an incredibly generous person who never expected any favors in return, which was highlighted when his colleagues would need to borrow materials.

“When he had the exact thing I was looking for in his office, he told me I wasn’t allowed to tease him about how much was stuffed in his office,” Ellis said. “That was the only expectation he ever had in giving me something that was exactly what I needed.”

Anna Larsen, associate professor and assistant chair of the Department of Chemistry, said Russo’s passion for teaching showed through the work he did at the college.

“Sometimes you see a person doing what they’re meant to do and it’s very obvious,” Larsen said. “Steve was the happiest, I think, when he was teaching, and it always showed.”

Freshman Andrew Nicoll said that though he only had Russo as a professor for his Enriched Principles of Chemistry Class in Fall 2017, his enthusiasm for the subject impacted him and his perspective on science.

“It was great being with him and whenever he brought in his examples,” Nicoll said. “There was this one solution he had that when you mixed it and put a light under it, the solution would consistently go between two colors, and he talked about how there were scientists still trying to figure out why that’s happening.”

Junior Leah Larsen said that though she did not have Russo as a teacher, the energy and enthusiasm that he brought to the department affected everyone who was a part of it, and she said she would miss having him around.

“You can tell when someone has a kind heart, and that was always Steve,” Larsen said. “Even though I never got the opportunity to have him as someone who educated me, I think that the thing about Steve that’s so central to him as a person is his love for teaching. His love for being here with his students and engaging them. And I think that’s something that anyone who knew Steve saw in him, and I’m really going to miss having that energy around.”

At the conclusion of the gathering, Touchton paraphrased a traditional Christian quote about how grief stems from love. He also said the attendants’ being present to reflect on Russo’s life was demonstrative of the love the college community had for him.

A memorial for Russo will be held 3–6 p.m. April 12 at Bangs Funeral Home in Ithaca.