UPDATE: Dean moves on to provost position at Goucher College 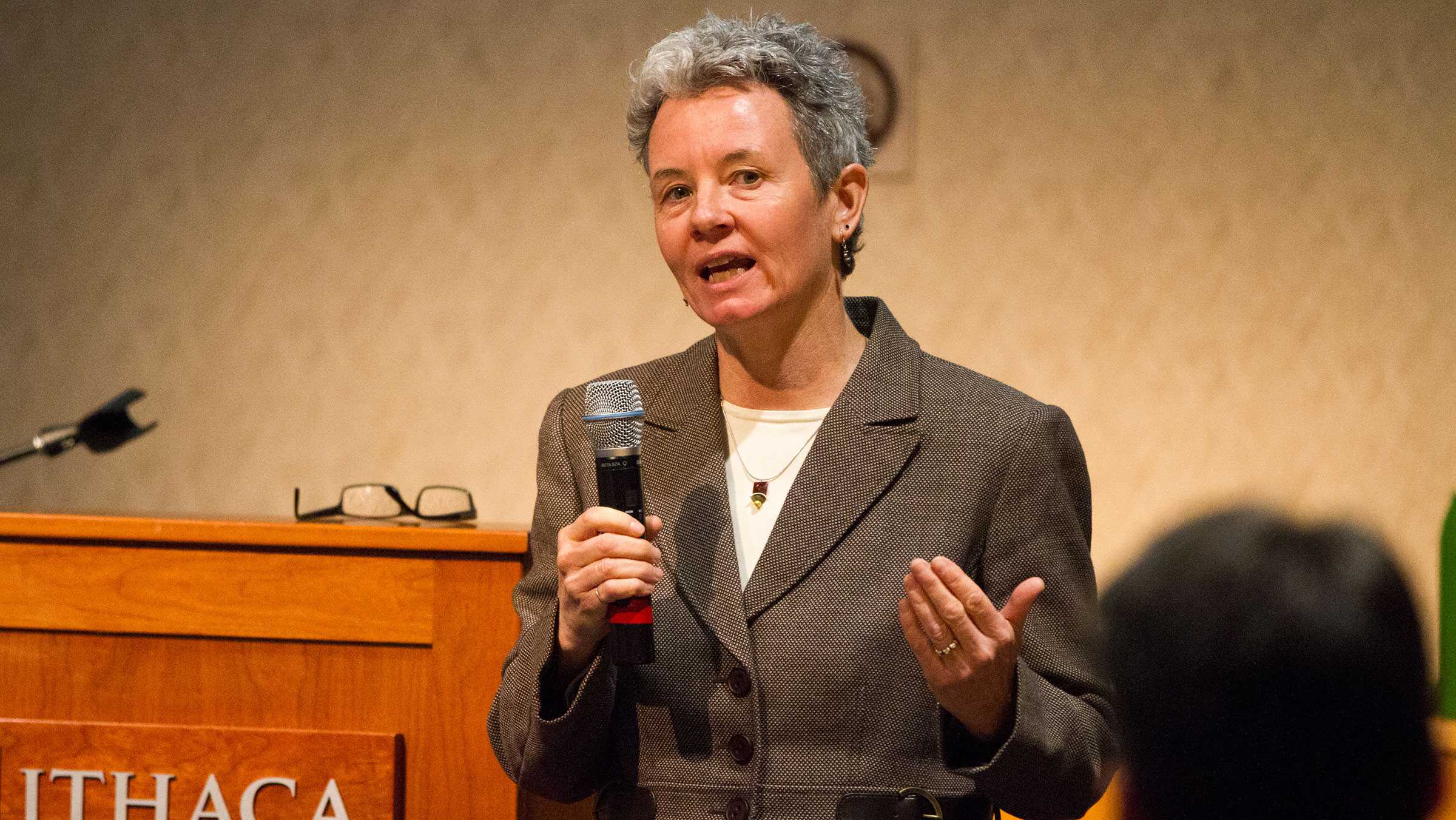 Jillian Flint/ The Ithacan
Leslie Lewis, dean of the School of Humanities and Sciences at Ithaca College, adresses the community as a provost finalist on Dec. 9 in Emerson Suites.
By Max Denning — Online News Editor
Published: March 23, 2015

One of Ithaca College’s deans recently announced her departure from the college, effective this June.

Leslie Lewis, dean of the School of Humanities and Sciences, has accepted the position of provost and vice president of academic affairs at Goucher College in Towson, Maryland, a suburb of Baltimore. She will begin work at Goucher on July 1.

Lewis was one of the four finalists and the only in-house candidate to replace Marissa Kelly as provost and vice president for educational affairs at Ithaca College. On Jan. 8, the college announced Benjamin Rifkin, dean of the School of Humanities and Social Sciences at The College of New Jersey, was chosen for the position.

The position at Goucher College is one Lewis said she looks forward to because Goucher is looking to redefine the way it educates students.

“Goucher is reinventing liberal arts college education for the 21st century,” she said. “They have a lot going on to try to figure what it is they want to be offering students in the future, and they needed an academic leader to help with that process.”

Lewis said she sees herself as a “servant leader.” While she said it was not initially her goal to be a provost of a college, as the longest-tenured dean at the college, she felt she should apply to be provost. Lewis has served as dean of H&S and a professor of English at the college since 2008.

“As the senior dean here at Ithaca College, it seemed to me that I should volunteer to do the work that the provost does,” Lewis said. “So, I put my name in the ring.”

Lewis said not being chosen as provost here led to her thinking about her other options.

“Realizing that my service is not needed here in that way, yes, that did free me up to think about other places where the kind of administrative service that I’m a part of would move forward,” she said.

Lewis said she was satisfied with the work she has accomplished at H&S, which led to her pursuing the position at Goucher.

“My work here at Ithaca really has reached a point where I’m very confident in what we have done here at H&S,” Lewis said. “That meant that my question to myself was what else might I want to do.”

Stacia Zabusky, associate dean for curriculum and undergraduate programs in H&S, said Lewis has been an important part of the school.

“Leslie has provided real leadership for H&S during her time as dean,” Zabusky said. “In particular, she has been a passionate supporter of, and advocate for, the liberal arts on campus and in the curriculum.”

“Dean Lewis was instrumental in the development and implementation of the ICC, which is offering our students a distinctive integrative educational experience,” Petrosino said.

Petrosino said she has begun meeting with faculty and administration within H&S to receive input before naming an interim dean.

“As soon as I have finished receiving input, I will plan to make an appointment, and an official announcement will be made within a couple of weeks if not sooner,” Petrosino said.

Lewis declined to comment on the nature of her role in the process of picking an interim dean.

Zabusky said she did not have an opinion on who or what type of person should be chosen as the interim dean.

A national search for a permanent replacement for Lewis will be conducted in the Fall 2015 semester, with the goal of naming the next dean by the summer of 2016.