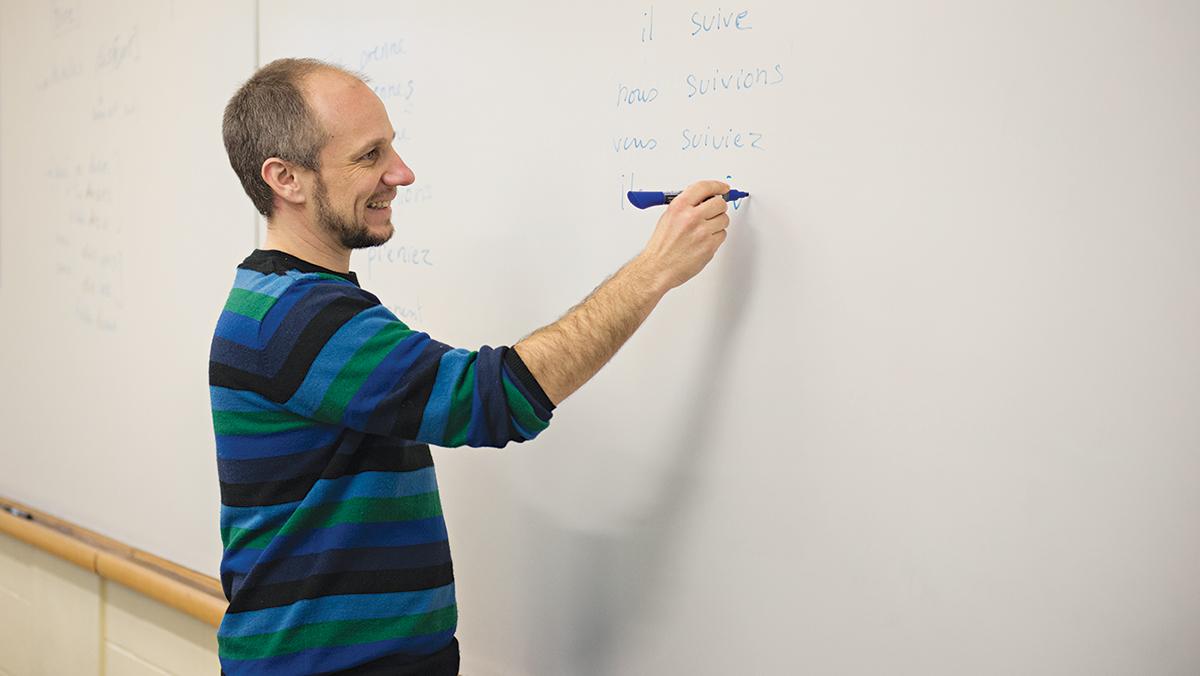 Sam Fuller/The Ithacan
Alex Lenoble, a lecturer in the French program, teaches a class. He is one of three faculty members who started teaching in the French Department this semester.
By Evan Popp — Staff Writer
Published: November 30, 2016

Since the end of the 2014–15 academic year, the Ithaca College French program has relied solely on part-time adjuncts and full-time contingent faculty hired on one-year contracts, with no tenured or tenure-eligible faculty positions in the program.

The French program is part of the Department of Modern Languages and Literatures. The program had three tenure-eligible positions during the 2013–14 academic year. At the conclusion of that academic year, one of these faculty members, Mark Hall, was denied tenure and left the institution. Elizabeth Hall, another tenure-eligible faculty member, took a leave of absence. She was later granted tenure but did not return to the college. The third tenure-track faculty member, Anne Theobald, left the college after the Spring 2015 semester, leaving the program without any tenured or tenure-track faculty members.

Julia Cozzarelli, assistant professor in the Department of Modern Languages and Literatures and former chair of the department, said she asked the provost’s office for three tenure-eligible lines two years ago but that none was granted. She said they requested two lines for the program last year and were granted permission to search for one.

Theobald, now an assistant professor of French at Hillsdale College, said she was “outraged and disillusioned” when Mark Hall was denied tenure in Spring 2014.

“I still regret leaving my students, especially since they lost three of their French professors in a very short period of time,” Theobald said in an email.

Vincent Wang, dean of the School of Humanities and Sciences, said in an email that he expects the tenure-track professor who will be hired in the French program will begin in the Fall 2017 semester. He said the tenure-track position was approved by the provost in July and is part of the 2017–18 hiring plan “to support and strengthen the French program at Ithaca College with commitment to a teacher-scholar model.”

French appears to be the only program at the college that has no tenured or tenure-eligible faculty positions, according to deans and associate deans in the college’s five schools.

The lack of a tenure-track faculty position in the French program is part of a larger trend in higher education. In 1969, 78.3 percent of professors were tenure-track. By 2009, that number had dropped to 33.5 percent, while 66.5 percent of professors were ineligible for tenure, according to the Association of Governing Boards of Universities and Colleges. Part-time and full-time contingent faculty members — who are ineligible for tenure — make up 40 percent of the college’s faculty population, The Ithacan reported in April 2016.

Junior Chris Kim, who came into the college as a French major and subsequently switched to sociology with a minor in French, said he has seen a revolving door of French professors since he came to the college.

“It seems like we get a new professor every semester, and someone leaves every semester,” Kim said. “I’ve been trying to stay updated [on] who’s around and who’s not. They just go in and out so quick.”

Bari Doeffinger ’03, who was a lecturer in the French program before departing after the Spring 2016 semester, is one such professor who has left the program. She said she’s worried that the instability within the faculty that comes with the lack of a tenure-track French position will have an impact on the quality of the program.

Alex Lenoble, a lecturer in French, said there are three faculty members — including himself — who only started teaching in the French program this semester, though one professor teaching French this semester, Faten Houissa, has been teaching Arabic at the college for a few years.

Senior David Braddy, a French major, has experienced firsthand the impact the revolving door of professors can have. He said poor academic advising from a professor in the program who has since left the college led to some challenges.

“I can’t really blame her though. She’s clearly thinking about other things. She has her own life to figure out,” Braddy said. “But it definitely did impact me in a way because I was in this situation where I didn’t know what to do and who to talk to.”

Additionally, the lack of stability makes it difficult to form a community within the program, junior Elizabeth Alexander, a French minor, said.

“It’s so crucial that we have people that are staying around for more than a semester and more than year at every level so that within the department, we can have so much more community across levels, across ages,” she said.

It would be beneficial for the program if professors stayed at the college for more than one semester, Lenoble said, because that first semester is when a professor has to get used to a new campus with new students and curricula.

“It takes time to adjust to the student body to see what works in the certain student body,” Lenoble said. “And of course, it would be better if I could have taught the first semester of French and then the second semester.”

“They might find that that faculty member has been pushed out due to a lack of job security, an elimination of their position, an opening of their position to a national search, or little to no opportunity to grow professionally at the college,” Grunberg said.

Ithaca College part-time faculty to vote whether to unionize