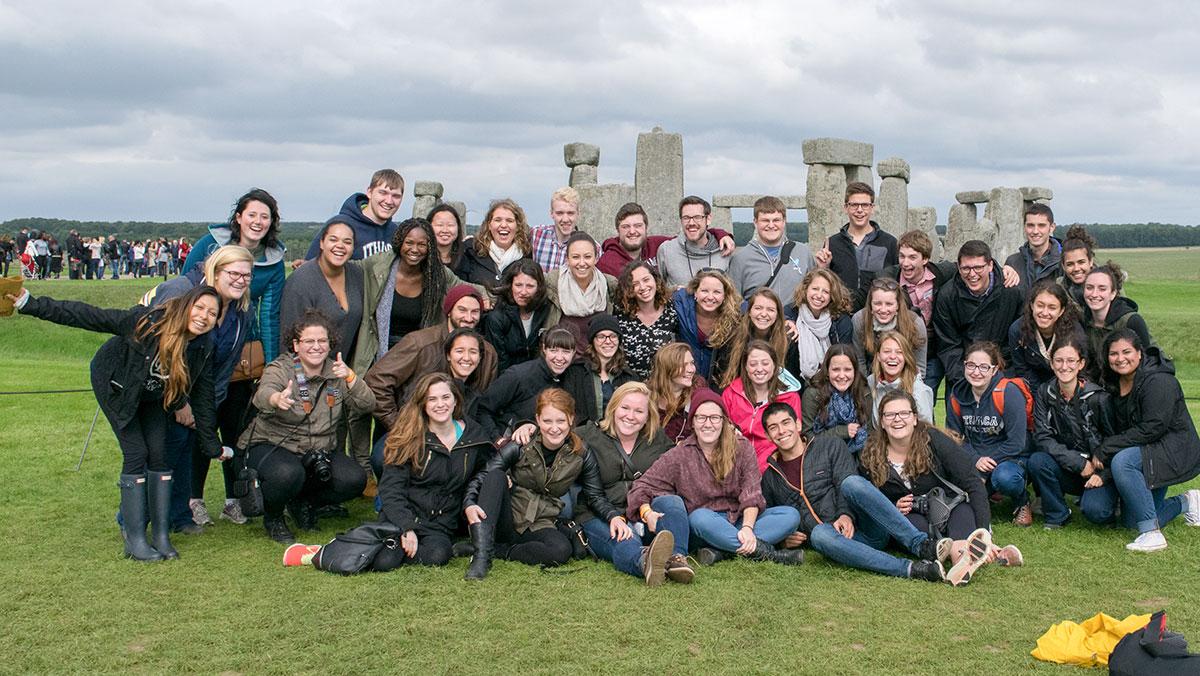 Courtesy of Bill Sheasgreen
A group of Ithaca College students studying in London, posed for a photo at the Stonehenge in Wilshire, England.
By Avalon Singer — Staff Writer
Published: October 21, 2015

This semester, the Ithaca College London Center is seeing a much higher enrollment compared to previous fall semesters.

For Fall 2015, 118 students are enrolled at the London Center, according to Office of Institutional Research data. This is more than double the 55 students who enrolled in the program in 2014 and is also significantly higher than the average of 48 students who studied at the center from 2003 to 2014.

Rachel Gould, director of study abroad, said this is the largest number of students since the 1980s, but the college has not been able to pinpoint a specific reason.

“We had warning about the theater students, so we knew it was going to be a larger semester, but I don’t think anyone was expecting it to be as large as it was,” Gould said.

Steve TenEyck, associate professor and associate chair of the Department of Theatre Arts, said the theater department encourages students to study abroad at the London Center because of the opportunities it provides.

“Having theater students spend a semester immersed in this sort of theatrical environment is of high value and expands their horizons about what is possible,” TenEyck said.

A theater student studying in London would typically take theater-related courses and see one or two shows a week. Thorunn Lonsdale, director of the Ithaca College London Center, said London is especially alluring to students in the drama program because of England’s theater culture.

“It’s the support from the theater department at Ithaca, and it’s the fact that London is world-renowned for its theater,” she said. “These students have the opportunity to see so much of it.”

Students who study theater attend the London program to take advantage of a pre-semester trip to the Edinburgh Festival Fringe and the Edinburgh International Festival. This experience is only offered to theater students studying abroad in the fall. When abroad, students in the drama program do several excursions outside of London, most notably to Stratford-upon-Avon to visit the Royal Shakespeare Company.

Mary Herbert, a junior acting major currently abroad at the London Center, said she thinks most theater students going abroad choose London because the program allows them to complete their specific credits needed to graduate on time. She said the most life-changing experiences she has had come from both in and out of the classroom.

“In times of culture shock and homesickness, I have never felt alone but instead am pushed even further into the English culture, to absorb as much information and as many experiences as I can,” Herbert said. “It is a special, extremely necessary time in my life, with lots of twists, turns and changes. It is preparing me for not only a career in theater but a successful life as an independent, go-getting adult.”

Gould said spring brings higher numbers of students studying abroad nationwide, which is reflected in higher spring semester attendance at the London Center. During the spring, it is more common to have numbers like this fall semester’s 118 students.

The London Center has a capacity of 125 students per semester. Lonsdale said they would not accept more students than they can accommodate and that the current number of staff members is appropriate to the current student capacity. The London Center has one part-time and three full-time staff members, with between 12 and 25 faculty members per semester.

This upcoming spring semester will reach the capacity of 125 students permitted to study at the London Center with 13 on the waiting list.

If the capacity were to be increased, the London Center would have to rent more buildings, teach a five-day week as opposed to the four-day week they have in place at the center or hold evening classes, Lonsdale said.

While the London program does draw many students, Gould said it is unlikely that the capacity will be heightened because there are plenty of other study abroad options.

Though this fall semester shows a steep increase in students abroad at the London Center, Gould said the college will have to wait until Fall 2016 to see if there is a trend or if this semester was just an anomaly.