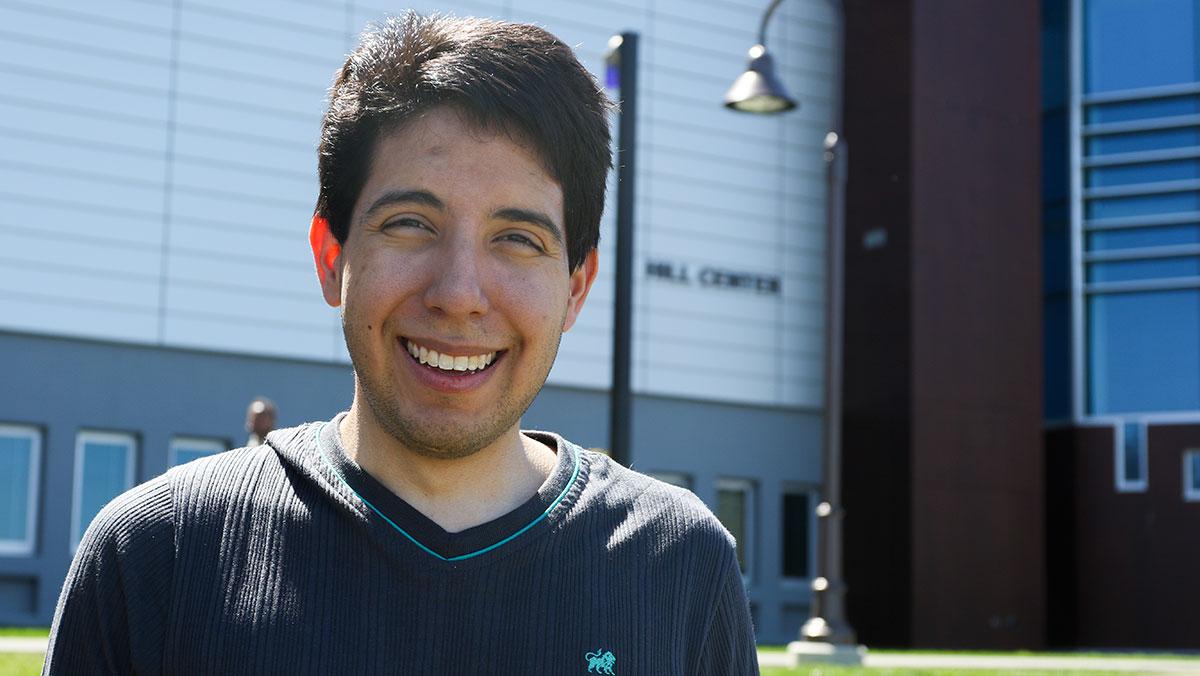 Yana Mazurkevich/The Ithacan
Alex Blanca is a speech-language pathology major who hopes to pursue a career where he would be a speech pathology clinician working with bilingual individuals, as he is fluent in both English and Spanish.
By Kathleen McAleese — Staff Writer
Published: April 20, 2016

Walking quickly from Lyon Hall in a plain hooded sweatshirt, senior Alex Blanca doesn’t stand out as he passes through campus every day. However, the fast-paced gait he keeps matches the pace with which he speaks about his many passions and involvements on campus.

Many students at Ithaca College aim to become involved in extracurricular activities during their education. However, for Blanca, this goes well beyond casual involvement with on-campus student organizations, especially with his interests around the topic of diversity. Blanca is a resident assistant, orientation leader, Martin Luther King Scholar and Diversity Peer Educator, and volunteers at elementary schools in the area.

Blanca is a speech-language pathology major who hopes to pursue a career where he would be a speech pathology clinician working with bilingual individuals, as he is fluent in both English and Spanish.

Coming to the college, Blanca did not intend to pursue all of the involvements he is currently engaged in, but he said the opportunities fell into his lap.

“I learn other people’s stories, and I learn about their other experiences, and that kind of just opens my eyes to different points of view, and it helps me get to know truly about a subject that, for example, racism, goes deeper, a lot deeper, than hurtful words or an insensitive comment,” Blanca said.

Through his job as an RA, Blanca is further able to create dialogue on important issues. He said being an RA offers a creative outlet for him, enabling him to share more about things like autism awareness or mental health through the construction of bulletin boards or floor events, which are two topics he also cares deeply about.

Don Austin, program coordinator for the DPEs and assistant director of community service and leadership development, has worked with Blanca for over a year as he oversees events and discussions about diversity.

“He really brings unique ideas and perspectives to the program since he got involved, and I wish there were a hundred more like him,” Austin said. “He is very dependable and reliable as a diversity peer educator.”

Starting his freshman year, Blanca was already involved in a small group of peers who comprised the group of MLK scholars. This program focuses on social justice, equality and service, and scholars engage in research, travel and participate in campus discussions about issues regarding diversity awareness.

Blanca has become more knowledgeable and passionate about topics regarding social justice and has expressed his passion by incorporating it into his involvements on campus, too. He has created diversity-themed bulletin boards and events for his residents and facilitated conversations about diversity through his role as a DPE.

“In light of the racist incidents, the cultural biases that occur on a daily basis on this campus for people of color, kind of getting to raise awareness of that through facilitating sessions and discussing microaggressions, privilege, through such hard topics, it’s good to kind of educate on it and bring up discussion and bring up dialogue,” Blanca said.

Senior Hillary Nguyen, a friend of Blanca’s and fellow MLK Scholar, said she first got to know Blanca on a civil rights trip their freshman year.

Blanca, through his involvements on campus, has found niches with others on campus and looks to use the skills he has gained to continue to address the issues he cares about.

“One of my goals is to increase my cultural competency, be more comfortable with uncomfortable conversations,” Blanca said. “Getting involved gave me the opportunity to meet people who I wouldn’t have been able to meet otherwise.”

Kathleen McAleese can be reached at kmcaleese@ithaca.edu or via Twitter: @@kthln_mcls